The scorecards for the controversial decision on the Lyoto Machida vs. Phil Davis bout have been released, and while all 3 scores have been widely disputed, one judge turned in an indefensible scorecard.

The co-main event bout for UFC 163 ended in controversy as all three judges scored it 29-28 for Phil Davis, when most viewers had Lyoto Machida winning the fight comfortably. Dana White said he thought it was 30-27 for Machida, while the official UFC FightMetric stats also scored it the same for the former light heavyweight champion.

The official score cards for the bout have been released, and the scores were dumbfounding: 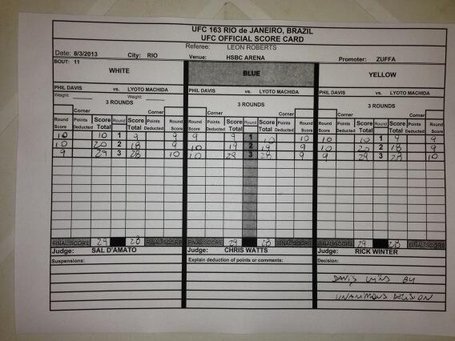 Judges Sal D'Amato and Rick Winter will surely be criticized for putting too much weight on Davis landing one takedown each during the final seconds of round 1 and 2, despite him losing much of the stand up battle.

Chris Watts on the other hand, churned in an even worse scorecard. He had Machida and Davis split the first two rounds. On the third, which was by far Lyoto's most dominant round where he also stuffed every single takedown attempt, he gave it to Davis.

D'Amato and Winter deserve the criticism they will get, but frankly, Watts just shouldn't be allowed to judge another MMA fight again as that scorecard was beyond incompetent and clearly indefensible. Unfortunately, if past instances are any indication, I don't think we will see results and changes about judging anytime soon.