2013 brings us yet another highly anticipated rematch with UFC 164's title bout between Anthony Pettis and Benson Henderson. Connor takes a look at the surprisingly simple keys to Pettis' celebrated striking game.

It's been a long time coming, hasn't it? Nearly three years ago Anthony Pettis snatched Benson Henderson's WEC lightweight title away from him, and hopes were high for his imminent UFC title match. Unfortunately Pettis, having chosen to stay busy rather than simply wait for his title shot, lost a grinding decision to once-fan-favorite Clay Guida, setting his old rival Ben Henderson up for a title run of his own.

Four title fights later, Ben Henderson has once again firmly established himself as the lightweight king, and Pettis hopes to spoil his dream yet again. And now that first-in-line contender T.J. "Nancy Kerrigan" Grant has been removed from the title picture, Pettis will finally have his second chance at Henderson's belt tomorrow night.

This is a matchup I've been looking forward to for a long time, and I know I'm not alone. Today we're going to examine Pettis' striking. Known for the legendary Showtime Kick that sealed his first victory over Bendo, Anthony Pettis is a nuanced striker whose arsenal includes a diverse array of wild techniques, but at heart his is a game that relies on a few simple principles and conventional striking techniques. Let's break it down!

This is my favorite aspect of Pettis' game, right here. Pettis has an impressive ability, unique in MMA, to find subtle angles on his opponent with the smallest of steps. 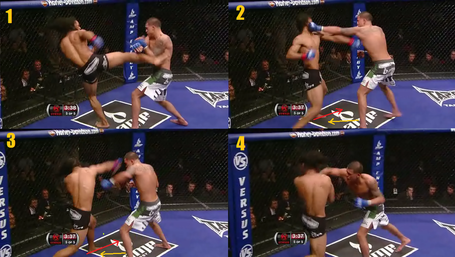 1. Ben Henderson throws a powerful switch kick that Pettis absorbs using a double-armed block. In the process of blocking the kick Pettis twists to his left, loading up his left hand.

2. He uncorks a long left hook that puts Bendo into fight-or-flight mode.

3. As is his wont, Bendo chooses to fight, and starts swinging. His right hand misses.

4. Pettis completes his combination with a crisp right hand to Bendo's jaw.

(GIF) This kind of fighting may not be as flashy as a 720º spinning scorpion kick, but it's the meat and potatoes of Pettis' style. In frames 2 and 3 above I have used arrows to illustrate the direction each of the fighters is facing, more or less indicated by the orientation of each man's front foot. In frame 2, Pettis has forced an angle on Henderson by pressuring him to move along the fence (more on that later). Notice that Pettis' yellow arrow is pointed directly at Henderson's center, while Henderson himself is facing off to Pettis' right. In frame 3, Henderson's whiffed right hand has turned him even further off-line, while Pettis is still zeroed in on him (for more on footwork and attacking the center line, check last week's Technique Recap).

The ability to create this kind of steady pressure will play a crucial role in this weekend's bout, as Henderson still has the same tendency to swing for the fences when he gets put in a tough spot, which will leave him wide open to Pettis' ever-improving boxing (his hands looked very crisp against Donald Cerrone).

The above is an example of Pettis attacking his opponent at very little risk to himself using an inside angle, so  named because the attacker moves to the inside of the opponent's lead foot. Another way in which Pettis likes to use inside angles is to set up his vicious head kicks, which he prefers to throw left-legged from a southpaw stance. 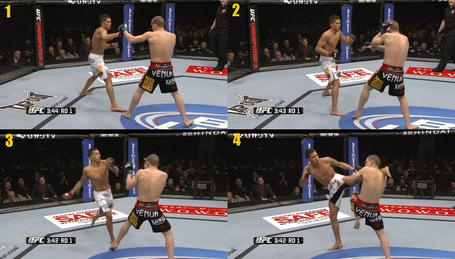 1. Pettis steps in behind a throwaway jab.

2. And follows up with a throwaway left hand, which Joe Lauzon attempts to parry, nervously bracing himself for any and all impact.

3. Satisfied that his target is open, Pettis steps in again, this time well to the inside of Lauzon's lead foot. His left arm swings in the natural motion of the kick, which serves as a left hand feint. Lauzon responds as before, by trying to parry the punch.

4. Then Lauzon, in momentary panic, tries to defend about four different strikes at once. None of his impromptu defenses do the trick. Pettis -- and there's no other way to put this -- slams his shin into Lauzon's jaw. One of the cleanest head kicks ever seen in the UFC drops Lauzon, and the fight is over soon after.

(GIF) The inside angle is invaluable for kicks, because it allows one to loop the kick over the guard or shoulder of the opponent. The step to the inside also grants Pettis' hips more room to swing his leg, build momentum, and turn fully over into the strike, which is why Pettis' kick seems to be landing on Lauzon's neck at a downward angle in frame four. This is the same sort of pulling, high-leverage action which grants every best left hook its power, and a roundhouse kick is no different. A perfect kick is nothing without the perfect setup, and sometimes perfection is simpler than you might think.

Cagecraft, Generalship, Octagon Control-whatever you call it, Pettis understands it. Much like highly-hyped UFC neophyte Conor McGregor, Pettis is equally adept at playing the counter fighter and the aggressor. When he is on the prowl, his understanding of the cage is unrivaled. Check out this example from WEC 53. 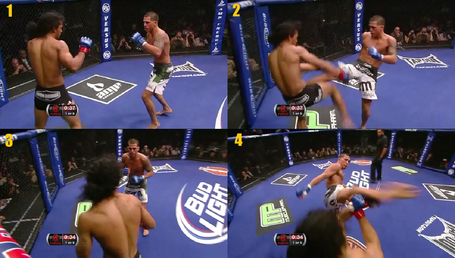 1. Pettis backs Bendo up toward the cage.

2. He puts the champ's back fully against the cage with a hard rear leg teep.

3. As he will continue to do all fight, Henderson moves to his right when his back is against the cage.

4. Pettis steps in with a very fast high kick that Benson avoids.

Pettis shows a clear understanding of how to use the shape, size, and limits of the WEC cage to his advantage. He begins by forcefully placing Henderson against the cage. (GIF) Once he's got him there, he notices that the champion only ever circles to his right, easily giving Pettis the inside angle which he loves for landing his head kicks (which are normally thrown southpaw vs. orthodox fighters, but the principle is identical given Henderson's southpaw stance). As Henderson circles along the cage, Pettis throws a high kick that, because of simple overeagerness, Henderson has room enough to avoid. But later in the fight, using a little ingenuity, Pettis managed to put that same principle to work, knocking Henderson down with the Forbidden Cage Kick of Legend. (GIF)

Throughout his fight with Ben Henderson Pettis showed an uncanny understanding of the cage. He backed Bendo up in order to throw a jumping knee which the champ could no longer back away from. He forced Bendo to circle along the cage to land punches and kicks (the first diagram is an example of this at work). And recently Pettis used the cage to land a "Showtime Knee" on Donald Cerrone, showing that his control savvy is not limited to the blue cage. (GIF) Pressure and control of the fighting space will be a huge asset if Pettis can enact a similar gameplan Saturday.

Alright, last bit, and there's some good and some bad here. Pettis is a tactician, and a masterful one at that, or else someone in his corner is giving him excellent instruction (quite probably Duke Roufus). When Pettis went into the fifth round with Henderson knowing that things were tied up, he showed excellent understanding. He abandoned a risky back take to avoid getting put on his back. Seconds later, he rolled out of Benson's back control, choosing to stand rather than engage with the champion on the ground, in order to steal the round in impressive fashion. In this he succeeded most impressively, as you all well know. And after landing his incredible kick, the soon-to-be champ chose to ride Henderson for the remainder of the round, landing enough strikes to keep from being separated but without taking any risks or giving Henderson any opportunity to land one last blow and potentially win the fight.

This kind of thinking and planning is a shamefully rare commodity in the UFC. For every Tim Boetsch comeback and GSP takedown, there is a Hatsu Hioki struggling to lock up a triangle from bottom for an entire round. Anthony Pettis has demonstrated many times (except perhaps against Clay Guida) that he is too clever to be outpointed easily, and that he understands when to outpoint his opponent.

This same tactical mindset has, however, caused Pettis some problems before. Rather than forcing the action against Henderson in every round, Pettis stalked and waited, waited, waited for that perfect opening. Pettis' choosiness is such that he often comes across as lazy in fights, constantly waiting for an opportunity to come to him, rather than creating the opportunity himself. Granted, this problem seems to be improved, with such impressive first round knockouts over Donald Cerrone and Joe Lauzon. Pettis can counterstrike much better than Ben Henderson, but he could also lose a decision to Henderson's volume of kicks and wild punches. I believe it was the great Mike McCallum who explained good counter-fighting thusly: "If he punches, I counter; if he doesn't punch, I counter." Pettis needs to be cautious not to be too cautious, because another fight as close as his first with Henderson might not go his way.

A judge's decision can be a fair-weather friend, but the knockout is a true companion. Especially the head kick variety.

Check out my podcast Heavy Hands at heavyhandspodcast.com. Our first episode comes out Tuesday. Thanks!

UFC 164: Henderson vs. Pettis 2 previews, analysis and predictions for the full card