Jose Aldo just might be the best striker in MMA. Connor breaks down the techniques and strategies that the Featherweight champ uses to maintain the distance, stuff the takedown, and get the KO.

Jose Aldo is, pound-for-pound, one of the best strikers in all of MMA. His boxing is crisp and powerful. His leg kicks are the stuff of legends. And his creativity and dynamism in applying these skills is unparalleled. Fans of striking simply cannot be disappointed with the prospect of seeing Jose Aldo fight.

But we learned long ago that striking skills are simply not enough in MMA. If even a mediocre grappler manages to drag a skilled kickboxer to the ground just once, the entire outlook of the fight is changed. This is why we watch MMA: to see incredibly well-rounded athletes endlessly contriving newer and better ways to beat the tar out of one another. Jose Aldo is just such an innovator, and yet his style relies on the oldest principle of fighting: distance control.

Just like Lyoto Machida, Aldo is a sprawl & brawler who rarely brawls, and who more often than not doesn't need to sprawl. His success lies in his ability to maintain distance, dominate the clinch, and scramble when taken down. Let's look at some of the nuances.

Few fighters can boast that they use angles half as well as Jose Aldo. After a rough first round, Aldo absolutely dominated Kenny Florian with angles. Every time that Kenny would step forward, either for a jab or a takedown attempt, Aldo pivoted out of the way. It wasn't long before he realized that he could capitalize on his position. 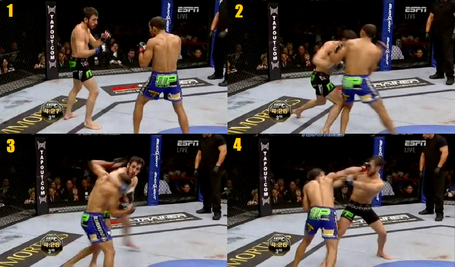 1. Take note of Florian's foot positioning. He has his lead foot on the inside of Aldo's, with the leg internally rotated (i.e. turned toward his other leg, away from Jose).

2. As Kenny steps in, Aldo pivots, using his hands to aid the movement while pushing Florian off balance.

3. Out of position but still hoping to get a hold of Aldo somehow, Kenny throws an arm around Aldo's head, hoping to tie up, but the distance and angle is wrong.

4. Jose throws a straight right that cracks Kenny between the eyes and forces him to disengage.

Throughout the fight, Florian showed that he simply did not have an effective weapon to keep Jose from circling to his right. Kenny consistently looked to establish the inside foot position first, using the jab and feinting the teep to enter range for power punches and takedowns, but the angle of his lead leg, turned away from Aldo as it was, allowed the champ to easily take the outside angle again and again.

My favorite moment from the fight happened when Florian began trying to counteract Aldo's angling. 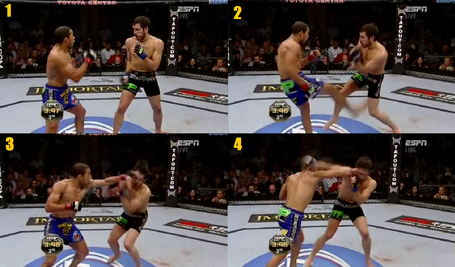 1. Florian fights to prevent Aldo from moving outside his lead foot. With every step that Aldo takes, he readjusts to protect his right side.

2. As a result, his stance becomes more open, and Jose throws one of his vicious leg kicks to the inside of Kenny's lead thigh. The powerful blow knocks the challenger's leg out from under him.

3. Florian ends up in a very poor position, and Aldo hits him with a left hook as he tries to correct and reestablish range.

4. Followed by a straight right to the cheek.

This hints at the mental aspect of Aldo's game. After repeatedly moving to the outside and punishing his opponent, Florian has no choice but to try to prevent him. But his preventative measures put him on the receiving end of a brutal combination of power shots. The implication: no matter what you do, Aldo will find some way to hurt you.

Chad Mendes never even managed to put Aldo on his back, and was knocked out with just a second left in the first round, all because of Jose's use of angles. 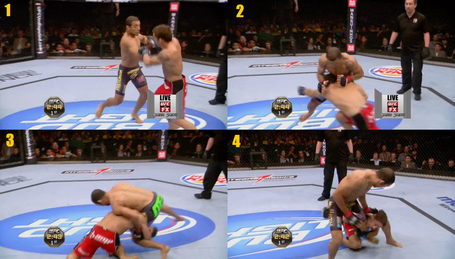 1. Aldo feints a jab and lands a hard right uppercut--one of his favorite combinations.

2. Mendes counters with a takedown attempt, and immediately gets a tight hold of Aldo's lead leg. Jose sprawls hard on him, taking his rear leg out of reach to kill the double.

3. Aldo begins to pivot, keeping his rear leg out of reach and forcing Mendes to follow him around.

4. Using a few short punches to keep Mendes occupied, Aldo turns his back and pulls the challenger off as casually as he would a very irritating boot.

I don't know for certain, but I'm willing to guess that Chad Mendes is right-handed. Like many wrestlers, however, he fights southpaw, so that his power leg is in front. Before UFC 162, Ben Thapa observed that Chris Weidman, who is right-handed and stands orthodox, prefers to use a single to bait his opponents into circling, as Aldo does above, and then drive them off their feet by stepping through with his right leg. The same principle is at play here, but in reverse. Since Mendes' driving leg is his lead, it is difficult for him to finish the single when Aldo circles to that same side. Rather than running the pipe on his opponent, he is forced to keep up with Aldo, desperately trying to get a hold of the champion's rear leg or line himself up well enough to drive and get Aldo to the ground.

Aldo prefers this method of takedown defense. It's almost impossible to secure a double leg on him because of his excellent sprawl, and he will pivot and strike until the opportunity arises to push the opponent's head down and strip his leg from their grasp. And let us not forget that Aldo's quick, tight pivots played a pretty major role in the finish of the fight, as well (GIF).

Just kidding. Impressive as he is, there are some holes in Aldo's game. Scarface can really crack given the opportunity, and as such he excels at fighting wrestlers, who do not typically have much of a nuanced striking game. But he struggled notably against Mark Hominick.It's rarely a good idea to go power-for-power with Jose Aldo, but Hominick showed that it is possible to outbox him. 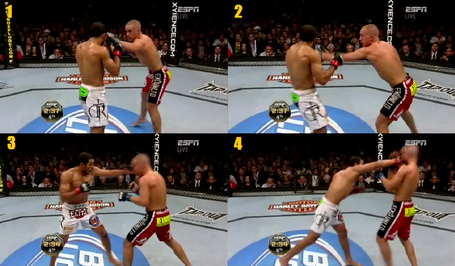 2. And another as he steps to the left. Notice that he has a perfect inside angle on Aldo here, the first jab having frozen Jose in his tracks.

3. Aldo comes back with a jab of his own.

4. And shows why he's the champ, knocking Hominick down with a brutal right hand.

Mark Hominick's stand up, before he retired, was reminiscent of Frankie Edgar's. He stands very heavy on his front foot, with his head close to his opponent. When it comes to defense, he usually reacts by standing up and backing away in a straight line, and he does a poor job of protecting his center line. That said, he had an excellent jab and left hook. Those are the kinds of punches that he used to frustrate Aldo and make him look less-than-stellar in the later rounds of the fight. It's not always necessary to go for the knockout with every punch, and Hominick utilized a variety of jabs to keep Aldo reactive. The punches in frames 1 and 2, while stinging, were not power shots, nor did they need to be. Had Hominick followed his second jab with a right hand or left hook, he might have been able to hurt Aldo.

In the final two frames, we see Jose's boxing style. Even his jab is a power shot, and his right hand has every bit of his body weight behind it. Hominick reacts very poorly to the attack, and crumples under the brunt of Aldo's power. Still, a fighter with better defense and an understanding of the jab, particularly doubling and tripling it up, could make Aldo hesitant to throw, and land some heavy leather on his chin while he adapts.

So there you have it. There are gaps in the champion's armor. Whether Korean Zombie will have the skills to capitalize on them is another matter. No fighter is perfect, but Jose Aldo is pretty damn close and, at only 26 years of age, he will likely be improving for years to come.