This Wednesday Martin "The Hitman" Kampmann meets Carlos Condit in a highly anticipated rematch. Connor breaks down the wrinkles of Kampmann's kickboxing game.

Sometimes I just don't know about Martin Kampmann. He's one of those guys who can pose a threat to any welterweight not named GSP on any given day, and yet too often he seems to be less than the sum of his parts. A kickboxer with an excellent jiu jitsu game and underrated wrestling, Kampmann has a 75% finishing ratio, having ended eight of his twenty wins by knockout and seven by submission. And yet... and yet something seems to perpetually keep the Dane from racking up enough consecutive wins to earn a title shot, despite the fact that he's been floating around in the top ten of the UFC's toughest division for four straight years.

Now Kampmann's being given yet another chance to prove that he really does have what it takes to challenge for the belt with a rematch against former WEC and UFC interim champ Carlos Condit. Both men are coming off of losses to number one contender Johny Hendricks, though their respective losses were decidedly different. Condit dropped a contentious decision to Hendricks in a fight that, had it been a five round affair, he would have likely won, while Kampmann fell to Johny's legendary left hand in the first minute of the very first round.

Today I'll be examining what it is about Kampmann's standup that makes him consistently competitive among the best welterweights in the world, as well as what keeps causing him to stumble just shy of the finish line on the road to the title.

This is undeniably one of Kampmann's strongest areas. Though the latter half of this article will get into just how flawed Kampmann's much touted standup game really is, he really does excel when he can get grips on his opponent. Kampmann constantly looks for one of three things: the front headlock, underhooks, and the double collar tie. His ability to switch seamlessly between these hand positions is the key to his success in close range, especially against wrestlers. 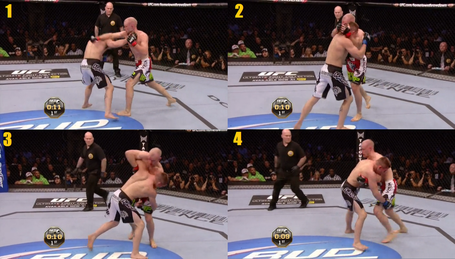 Kampmann possesses an excellent ability to control the upper body and posture of his opponents, which in turn helps him to land his lethal clinch knees. The Hitman's knee strikes are by far his best weapon, and he applies them both as offensive and counter weapons. 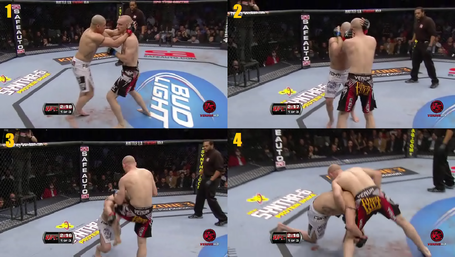 Kampmann also mixes things up in the clinch. I'm far from an expert on things grappling, but BE's Ben Thapa is, and he did a great breakdown of one of Martin Kampmann's takedowns from the clinch against Rick Story.

If Wednesday's event offers one sure bet, it's that Joe Rogan will describe Martin Kampmann using the word "technical" about six thousand times. Rogan's definition of technical is certainly different from mine, but I will tell you why the contentious commentator falls back on this descriptor so often. Kampmann consistently throws remarkably straight punches in every fight, throwing with unrivaled calmness and poise. The welterweight division is filled to the brim with archetypal wrestle-boxers, men whose wrestling skills are invariably far more polished than their boxing. Kampmann excels against these wide-swinging warriors simply because of how straight and accurate his punches are. 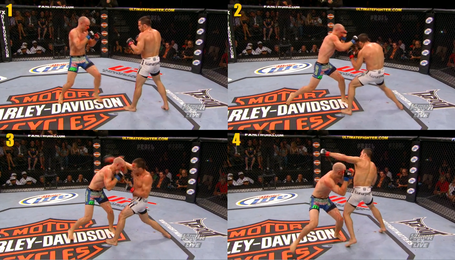 This punch was damn near invisible during the fight itself. (GIF) Kampmann's feint was well done, just enough to get Ellenberger to commit to a counter. Kampmann landed a right hand so absurdly short that Ellenberger's only possible response was to do a silly little dance. The commentators echoed Ellenberger's dazed confusion, unsure whether Jake had been rocked or merely thrown the least coordinated combination of all time. Even the replay was mystifying, as it showed Ellenberger being rocked by a punch that was, for lack of a better term, soft. The fact is that Kampmann's punch was incredibly successful because it was thrown completely straight, easily landing before Ellenberger could even throw his own strike.

And, of course, Kampmann followed with some of the aforementioned knees, turning the previously formidable Jake Ellenberger into a decidedly unthreatening heap. (GIF) Kampmann's right hand has served him well as a counter on numerous occasions.

Alright here it is. It was a bit of a challenge for me to not write this article with an overall tone of negativity - not because I dislike Martin Kampmann, but because I feel compelled as a fan of truly technical striking to disprove Joe Rogan and Mike Goldberg's endless insistence that Kampmann is a master technician.

About two years ago, BE's own Dallas Winston wrote a dissection aptly comparing Martin Kampmann to Stefan Struve. Before you start to mock Dallas for confusing Denmark with Holland, allow me to provide you with the pertinent quote: "Kampmann reminds me of Stefan Struve in that he's mostly billed as a kickboxing specialist, yet it seems that his smooth submission game might be his strongest attribute." Dallas was on point here. Kampmann's BJJ is very high level, and his submissions of Jorge Rivera, Jacob Volkmann, Drew McFedries, and Thiago Alves cement the conclusion that his submission game is his most reliable weapon against opponents who are capable of hurting him on the feet (not to mention his grappling-heavy decision over Condit).

When it comes to striking, however, Martin has some very risky tendencies. The same confidence in straight-as-an-arrow counters that set up his knockout of Jake Ellenberger got him brutally knocked down in the first round of the very same fight. 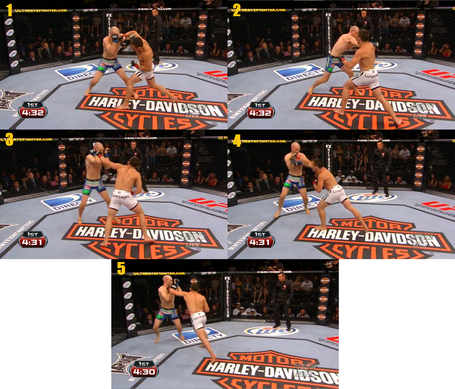 There are tons of critical mistakes happening in this exchange. (GIF) First is Kampmann's overcommitted jab. This is a consistently dangerous tendency of the Dane. Frequently when on the offensive he moves forward overzealously, usually in a straight line at an opponent in perfect position to defend themselves and/or counter.

Second we have Kampmann's right hand. This is his favorite punch, and it shows. Like humans are wont to do when it comes to our favorite things, Kampmann shows poor judgment when his precious right hand is involved. We overindulge in our favorite foods, allow our favorite children to get away with wrongs their siblings would be punished for, and forgive our favorite bands for releasing awful singles. In Martin Kampmann's case, he allows his right hand to fly when it would be better to hold back. Using the Harley-Davidson logo on the canvas, compare Kampmann's foot position in frame two to his foot position in frame one. His feet are in the exact same position, despite the fact that Ellenberger's own position has changed drastically. To add to this misfortune, Kampmann's weight, and consequently his upper body, has come forward with the right hand, and he is quite open for a left hook. He has a terrible tendency to come forward with his right hand and stay, in range, on the front foot. I sometimes wonder if he is simply waiting to be struck before moving out of range, he does it so consistently.

Having eaten the requisite left hook, Kampmann tries too late to back away, but does so with no change of angle. This makes it a simple task to follow him, even for a wildly swinging Jake Ellenberger. This results in a knockdown that Kampmann survives only as a result of his tremendous chin. He faced a nearly identical situation against Johny Hendricks and didn't fare nearly as well. (GIF) Kampmann's refusal to secure position before attempting to counter means his counters can either look like this--GIF--or like this--GIF.

Kampmann's defense is porous, and unfortunately he is frightfully inconsistent. It is remarkably easy to find two GIFs from a given Martin Kampmann fight one of which shows him being knocked down and the other which shows him finishing the opponent. The fact that he is frequently outstruck by opponents without his extensive striking background should be telling. A win is a win, but should Kampmann be happy with always being forced to pull off a massive comeback?

I really don't want to get too down on the guy, though. Martin Kampmann might be a very flawed striker, but his MMA game is in fact incredibly strong. I said at the start of this article that Kampmann could pose a threat to nearly any welterweight on any given day, and I meant it. When his striking fails him, Kampmann has rarely failed to fall back on his potent submission skills and his underrated wrestling. And though he is at high risk at punching range, Kampmann has proven numerous times that he is not to be underestimated in the clinch, even after being badly hurt.

The rematch with Condit will, above all, almost certainly be an exciting affair, capping off a card chock-full of promising matchups. Make sure to check Bloody Elbow tomorrow for my breakdown of Carlos Condit!