At the UFC Fight Night on FS1, Conor McGregor showed off a bit of his improved ground game, and T.P. Grant examines his pressure passing game.

The UFC's debut on FS1 was a huge success, both in terms of ratings and in terms of quality of fights. One of the fighters who helped generate a great deal of excitement was Irish fighter Conor McGregor. Part of his quick rise to fame is his excellent and unique striking, but in the first round of his fight with Max Holloway a knee injury forced McGregor to turn to his grappling a bit. A Brazilian Jiu Jitsu purple belt, McGregor showed off very good ground skills, particularly his ability to pass the guard.

Many remember Holloway as the teenage Hawaiian scrapper who, a year and half ago, was toyed with on the ground by another BJJ purple belt in Dustin Poirier. At the time, Holloway was still a white belt in BJJ, and to white belts a purple belt is a near demigod when it comes to grappling, despite that fact that many purple belts will tell someone they are still very much just starting to wrap their minds around the intricacies of Jiu Jitsu. The clinic Poirier put on Holloway is one played out on a nightly basis in Jiu Jitsu academies between purple and white belts.

But Holloway has grown a great deal since then, training out of a school that is primarily a Jiu Jitsu academy, taught by a Pedro Sauer black belt, a prominent member of the Rickson Gracie lineage. So when faced with another BJJ purple belt, Holloway did show some improvement during McGregor's first guard pass. 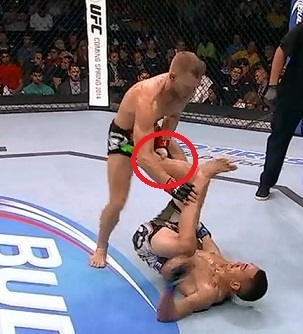 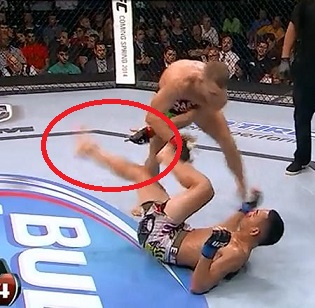 In the mid-2nd round, McGregor got Holloway to the ground, and as pictured above tried a very simple form of the leg drag pass. McGregor's left hand controlled Holloway's right leg and then tried to throw it back as McGregor attempted to simply walk around Holloway's guard.

While this is a very bare bones pass, Holloway is in a very compromised position as he has no grips on McGregor and zero control of the Irishman. For many novice grapplers having lost control of a standing opponent is a sure fire recipe for disaster and almost always results in a passed guard. But Holloway shows some guile as he deftly defended the pass from his disadvantageous position. 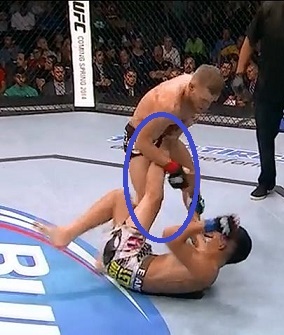 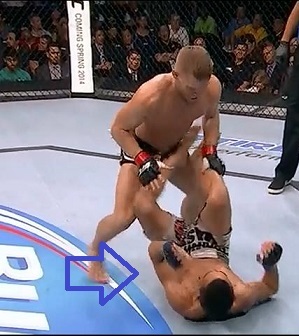 Holloway is able to turn on to his hip and face McGregor because the Irishman actually has zero control of the Hawaiian's body or movement. Holloway brings his left leg into McGregor's hip, limiting the top man's ability to move around to the side and allowing Holloway to execute a very quick hip scoot to bring himself back to square with McGergor and back into his open guard.

Now McGregor ends up in position to try a leg drag to the other side, but opts to begin striking instead and Holloway is able to more fully recompose his guard. (Gif)

While this pass was a failure for McGregor, it gave him important information about Holloway's improving guard game. When McGregor was next given a chance to pass he would exert more control over Holloway and negate the leverage provided by the Hawaiian's long legs. 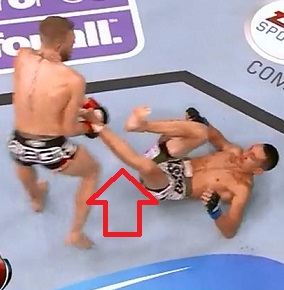 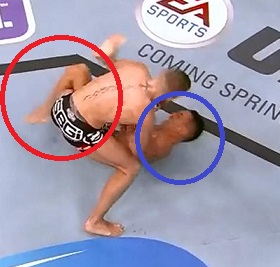 Later in the same guard battle, Holloway attempts to push McGregor off him with his legs. McGregor controls Holloway's right foot with both hands and executes another leg drag, pulling Holloway's leg across his body creating a path around the legs and to side control. This time McGregor doesn't take any chances and in the red circle you can see that McGregor puts his left leg under Holloway's leg, trapping in place in a classic leg drag pass finish. But in the blue circle you can see that McGregor does not yet have control of Holloway's head, which means that Holloway can still turn to face him and still move his hips. A brief battle ensues as McGregor tries to get control of Holloway's head and Holloway desperately tries to hip out to again recompose his guard. 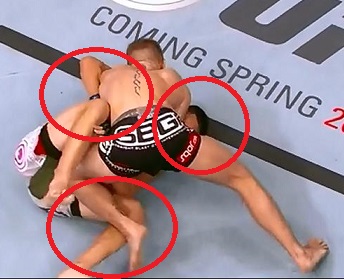 After this short fight within a fight, they end up in the position pictured above.

McGregor has achieved a total victory in their short scramble as he as gained every element needed to pass the guard with what is commonly referred to as pressure passing.

While it is blocked, McGregor's right arm has established a strong cross face on Holloway, this limits the amount Holloway can turn to face McGregor and thus limits his hip movement.

McGregor's right arm has established a deep under hook, which allows McGregor to put weight down on Holloway and put his back flat to the mat. The two basic things a fighter needs to complete a pass is to pin a bottom man's back to the mat and control his hips - once those two things are achieved, the pass is just a matter of time. And in this case you can see that McGregor is actually resting his left shin on the leg of Holloway, blocking any chance the Hawaiian had of locking up the half guard.

From here, McGregor is able to put down a great deal of weight and pressure and it is a simple matter for him to hop his leg out and go to knee-on-stomach position. (Gif)

But Holloway is again able to display good hip movement and fight his way to the half guard. 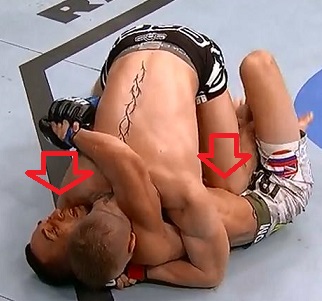 McGregor gets the half guard top position pictured above, and again he is driving intense pressure down on Holloway's head, preventing him from turning towards McGregor and recomposing his guard. The Irishman also slipped his knee out of the half guard and is driving it down into Holloways stomach, adding to the pressure.

From this position, McGregor has two options: moving to mount or moving to side control. In this case Holloway is squeezing his thighs tight together, trapping McGregor's foot in what is sometimes called quarter guard, a last ditch defense against the mount. With Holloway defending the pass to the mount, McGregor goes for the move to side control. 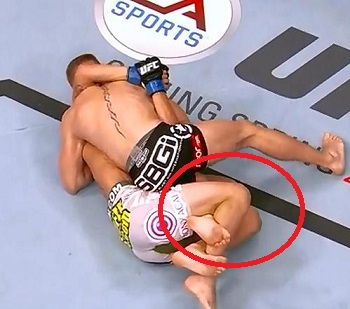 McGregor switches to a pass known as the Knee Slide; he uses his underhook to keep Holloway's back flat and drives the knee of the trapped leg to the mat. From here he is in good position to power through Holloway's grip on his foot and into side control. Holloway's only chance is to swim for an underhook and try to take McGregor's back. 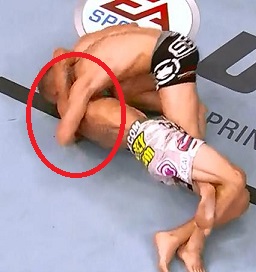 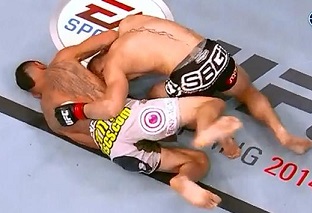 Instead Holloway tries to power out, clamping down on McGregor's leg and trying to roll into him and knock him over. But McGregor still has the underhook, circled in red. McGregor is able to use the underhook to take the power out of Holloway's push, get to his knees and put Holloway down into side control and finish the pass. (Gif) 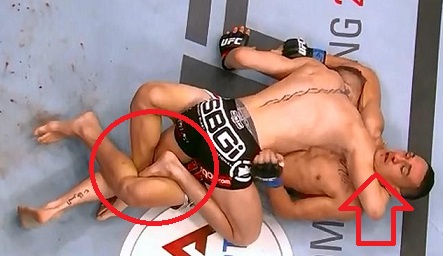 In the third round McGregor again found himself in Holloway's half guard, and again he has a strong crossface on Holloway, putting down heavy pressure. This time Holloway's knees are wide apart, and McGregor has worked his foot in to help pry the legs apart to make the pass to mount. 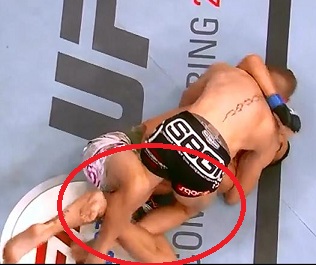 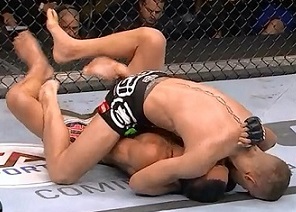 McGregor puts his weight down on his shoulder resting on Holloway's face and raises up his hips, slipping his left knee out of the guard and using his right shin to pry Holloway's legs open, as picture on the upper left picture. McGregor then drives his hips down and both knees to the ground, keeping his weight on the shoulder against Holloway's face. He is then easily able to pop his feet out to the mount, finishing what is commonly called the Tripod Pass. (Gif)

The knee slide and tripod pass together make up the core of most pressure passing games, in addition to a few other passes. Much like submissions or takedowns, these passes are used together in chains, as an opponent counters one the top fighter switches to another, consistently staying on the offensive. Both Holloway and McGregor showed a good deal of growth on the mat in their fight, but McGregor's passing game was clearly far ahead of Holloway's ability to retain his guard.

To close with here is a look of the highly refined pressure passing game and linking together of techniques of Rodolfo Vieira by BJJ Scout.