Conor McGregor has the whole MMA world talking, and this Saturday he'll have the chance to prove that the hype surrounding him is well-deserved. Connor breaks down the unique and dangerous striking of this new prospect.

Share All sharing options for: Judo Chop: The Striking of Conor McGregor

He's not fighting in the main event. He's not even on the main card. But he's on just about every hardcore MMA fan's radar. After an electrifying UFC debut, preceded by a pair of remarkable regional title fights which resulted in a pair of championship belts in two different divisions, it's safe to say that Conor McGregor has gained the attention of the MMA world, and generated a veritable aura of hype in the process. This Saturday, he will vie with another promising prospect in Max Holloway to determine whether or not the hype is deserved.

This be-mohawked Irishman brings to the UFC a sort of unorthodox orthodoxy: most of the things he does are not usual in MMA, but all of them make sense. To the cookie-cutter MMA gyms of the world, McGregor's fundamentals are not your fundamentals, but they are still correct. They still get the job done, often in spectacular fashion. Here's how.

McGregor's stance is quite similar to Lyoto Machida's, which I discussed in a recent breakdown. The strongest aspect of McGregor's stance is his posture. His back is always nice and straight, his shoulders relaxed, and his neck braced by his body. Despite the fact that, like Machida, he tends to carry his chin high, he has an excellent ability to withstand punches due to his posture, such as this one from Marcus Brimage. 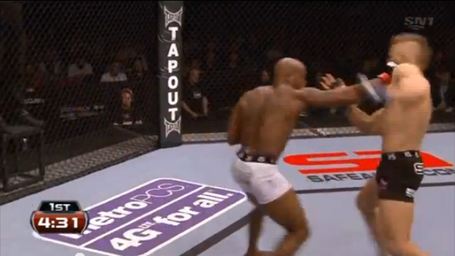 The other key element of McGregor's stance is in his legs. 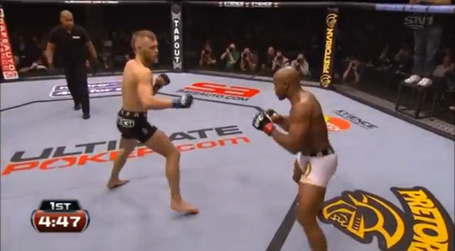 More than any other fighter in the division, McGregor understands the importance of getting low. Punching power doesn't come from strength alone. Leverage is far more important. The best punches are not the result of forward momentum but of the body pushing, pulling, and twisting into the strike. McGregor often enjoys a significant height and reach advantage, but he uses this extra length by getting under his opponents and striking them with authority. And, unlike many grapplers, particularly those from BJJ, where stance is often not stressed, he gets low without bending his back. It's all in the legs.

One of McGregor's favorite strikes is the soft left hand. Before you begin to question McGregor's power, and why I might term his straight left "soft," let me explain the idea. I learned my name for this technique from Mr. Luis Monda, of Johnny Tocco's gym in Las Vegas. Powerful punches require leverage and the transfer of weight, so by comparison a punch which does not utilize these principles is "soft."

2. And snap! His left hand connects before Buchinger even sees it coming, straight from the shoulder and without much hip behind it.

The movement of Buchinger's head in response to the blow proves that McGregor's punches are not truly soft, but this favorite strike of his is not optimal for power. Rather, it is the perfect shot for disrupting the rhythm of the opponent. If you watch any boxing at all, the movements of this strike might seem familiar to you. That's because Floyd Mayweather's famed lead right hand is also a soft cross.

Mayweather's cross, like McGregor's, eschews the mechanics of power-punching in favor of maximizing distance-coverage and speed of delivery. Floyd has long been lauded for the fact that his right hand has virtually no tell--there is no wind up whatsoever, no indication that the strike is coming. McGregor's is virtually the same. And despite the fact that these often end up being "pushed" punches rather than "snapped" ones, there is no denying their effectiveness.

I love this kick. What seemed to me at first to be a very risky technique is in fact one of the trickiest weapons in McGregor's arsenal. Check it out for yourself. 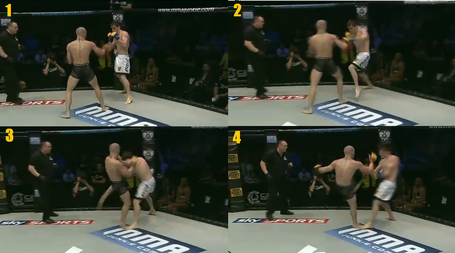 1. McGregor probes with his lead hand with his opponent's back to the fence. Note that his lead foot is directed at Dave Hill's centerline.

2. Trying to stick to the basics, the overmatched Hill decides to jab his way out, telegraphing his punch by lifting his elbow and taking a dramatic step forward.

3. The moment Hill begins his punch, McGregor is already launching into a left high kick. Hill makes a rookie mistake and looks away from McGregor as he punches.

4. The kick catches him completely unawares, and sends him staggering backward.

McGregor's high kicks are very understated. He maintains position throughout the sequence above, never taking the common diagonal step to load up his kick. Instead, he throws right from his stance, adding power and snap by chambering his leg. Rather than throwing a horizontal or downward arcing kick, both popular in Dutch kickboxing and American "Muay Thai," McGregor throws a nearly vertical kick that slams shin-first into Hill's head as he ducks down to avoid being punched. And later in the fight, McGregor lands the same kick after getting Hill to slip a straight left that never comes.

McGregor's kicks have a lot in common with the high kicks of Kyokushin Karate. The hips thrust, but do not turn over. There is very little pivot. Instead of whipping the leg like a baseball bat, McGregor snaps it upward and over, like a diagonal front kick. Most importantly, the base foot either remains in place, or takes a small step to the inside. This step makes it very difficult both for the opponent to block the kick as it loops around their guard, and to step or pivot away from it, which usually causes them to square themselves up to the strike. Check out this Kyokushin head kick highlight and note the similarities.

Anthony Pettis used a similar kick, complete with the inside angle step, in his desturction of Joe Lauzon last year (GIF).

McGregor's footwork is spectacular. Much like Lyoto Machida, he prefers to counter using a subtle inside angle, rather than the outside step typically suggested to southpaw fighters. Though it's not quite a staple of his game yet, one of my favorite pieces of footwork trickery occurred a number of times in McGregor's fight with Dave Hill. Against Hill McGregor tried out a move called, simply, the hop-step. 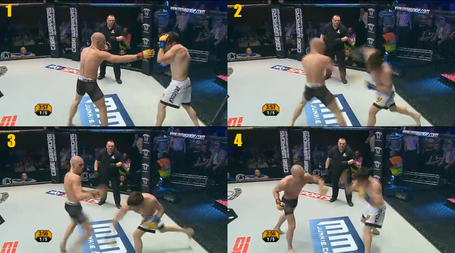 1. McGregor tests the waters with his lead. Even this causes Hill, who has by this point in the fight made it painfully clear that he is downright frightened of McGregor on the feet, to shell up.

2. Feeling forced to do something, Hill feints a jab and flings out a wide right hand. McGregor pulls, creating some distance.

3. Here's the hop-step. McGregor's lead foot comes back before his rear foot moves.

4. The moment after his lead foot lands, his rear foot connects with the ground, and he throws a straight left.

The punch here misses by a mile, but the footwork behind it is something to marvel at, and the failure of the technique has more to do with Hill's refusal to actually commit to his attack than McGregor's inability to execute. The trick of the hop-step is that it simultaneously allows McGregor to make space, take an angle, and throw a punch. Starting from a pulled-back stance with his weight on his rear foot, the step brings his weight forward, and the left hand with it, while moving his entire body to his left. It really is a marvelous technique.

The backward hop-step, when effective, accomplishes the same goal as the now well-studied slip-counter that McGregor used to knock out Ivan Buchinger in his last fight before entering the UFC (GIF). Lyoto Machida uses a similar movement with great success (GIF1, GIF2).

McGregor does an exceptional job of exiting on angles after landing one or two strikes. If you haven't seen the fight, please watch this GIF of McGregor dismantling Marcus Brimage in his UFC debut. Every time that Brimage gets a bead on McGregor, his opponent is not standing where he was before. Brimage is forced to turn, and it is in that split second of reactive behavior that McGregor lands his next shot, before taking yet another angle and repeating the process.

McGregor's brilliance is in his subtlety. Occasional spinning kicks aside, Conor McGregor really isn't a flashy fighter. Small steps in the right direction at the right time, a little head movement before a devastating counter, a sudden twitch to keep the opponent guessing-these are the fundamentals that make McGregor great, and the tools that set him apart from the run-of-the-mill.

Step into any fighting academy in the county and you'll most likely hear some version of the following: there are four, maybe five martial arts that will bring one success in the cage. From within those arts, only about fifty percent of the techniques are applicable. Fighters who break the mold are to be classified as freakishly talented athletes, exempt from the rules of fighting. You are not one of those athletes; you are not exempt from the rules. Tuck your chin. Stick and move. Keep your hands up.

Conor McGregor represents a new wave of fighters that, hopefully, will turn this way of thinking on its head. Sometimes there is a right way and a wrong way of doing things, but to find the most effective techniques you must experiment, study, and learn. Conor McGregor is a student of the game in the truest sense.