This is an update of a post that was originally published yesterday on the MMA Injury blog, as a pre-fight analysis of Nick Newell's ability to effectively utilize his congenitally unique left arm when fighting.

In the main card of last night's WSOF 4 Nick Newell squared off against Keon Caldwell. This was Newell's first bout with WSOF, and for me, it was the featured bout on this card. Nick has a congenital deformity of his arm that essentially left him with no forearm and no hand. In this post, I will explain why I don't see this as a disability, but more of an impairment for Nick. For the purpose of this article, I define disability as a physical handicap that puts one at a disadvantage. I define impairment as the state of being physically diminished.

Nick once observed that "People will always look at me as being the guy with one hand." His left arm does have an elbow, but it appears to have limited flexion and extension movement. The fact that he does have an elbow seems to be important to his ability to execute submissions. Andrew Calandrelli, who has trained with Nick, once stated "He actually has created new ways to use (the arm) to his advantage and create submissions."

In December 2011 at XFC 15, Newell defeated Denis Hernandez via heel hook in the first round. The series of pictures below were taken from the video of that fight, which you can see in its entirety here.

This first picture clearly shows the position in which the left elbow is fixed. 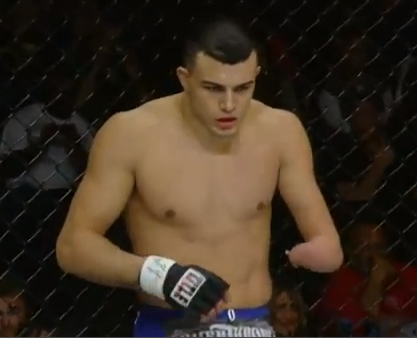 In the picture below, Nick uses the "hook" formed by the flexed elbow to secure Hernandez' right leg, ultimately executing a take down. 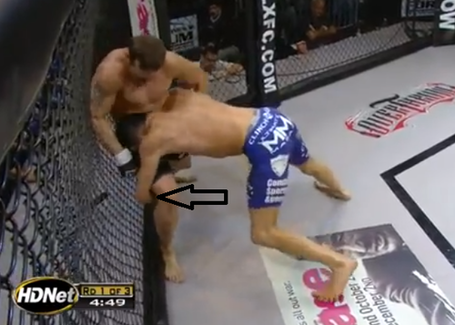 Once he had Hernandez down, Nick was able to use the flexed position of the elbow effectively to isolate the right leg (first picture below) and secure the heel hook submission (second picture). 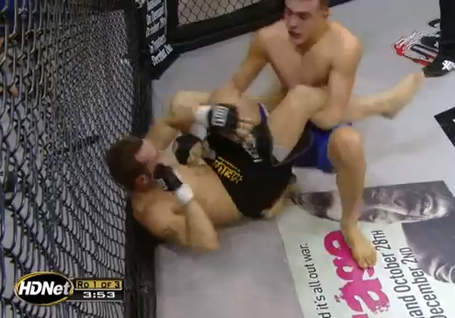 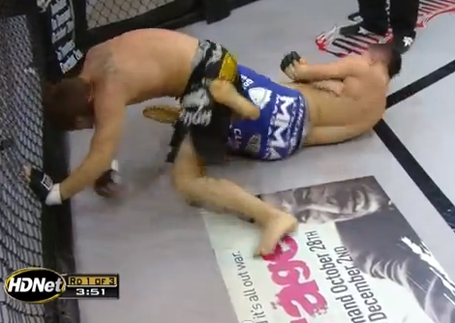 In a March 2010 bout at Triumph Fighter 1, Newell defeated Steve Butler via rear-naked choke. (Click here for the fight video.) He demonstrated the ability to utilize the hooked position of the left elbow to secure his right arm, which was wrapped around Butler's neck for the choke. Newell once again demonstrated effective use of the left elbow last night when he secured the choke submission on Keon Caldwell. The circled area in the picture below shows the left elbow. 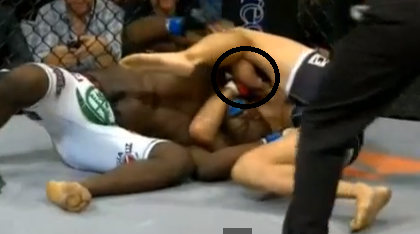 Since Newell seems to be adept at using what he has available in his left arm, I think he is more physically diminished than physically disabled. He fared well last night against a presumably higher caliber fighter than those in his previous fights. During the fight, there were some Tweets about how Newell is neither a human interest story, nor an inspiration- he's just a fighter. While I understand the sentiment, I disagree that he is not an inspiration. Watching people overcome obstacles and succeed at a high level is inspiring to me. I see this on a daily basis in my work as a physical therapist.

As Nick once stated, "My goal is to prove that people with disabilities can go out and win. It's more of a message I'd like to send, that if you have a goal, go out and do it."