The UFC's signing of undefeated German fighter Benjamin Brinsa has created controversy due to Brinsa's alleged neo-nazi activities and affiliations.

One of the stories that has been gaining a little bit of traction today has been the signing of Benjamin Brinsa by the UFC. Brinsa is an undefeated fighter out of Germany whose name and profile appeared on the UFC homepage this morning.

The reason this has drawn attention beyond any regular signing is that it appears that Brinsa has some strong ties to the neo-Nazi movement in Germany. There have been stories in multiple German media outlets about Brinsa, showing photos of him (allegedly) at a Neo-Nazi demonstration and behind a banner speaking of a "national resistance" (an extremely loaded term in Germany), as well as speaking of his alleged ties and business relationships with a man who distributes neo-Nazi music through a mail order business. This article claimed that Brinsa was listed in official government documents as Managing Director of a company which was listed as responsible for the content of an Aryan Brotherhood website. That site has been taken down, but there is an archived version of the site available here.

Brinsa has denied any neo-Nazi leanings throughout his career, while admitting that he is in the photos and was aware of what the "national resistance" banner he was posing with said.

My calls and e-mails to the UFC regarding the matter have thus far gone unanswered. I am curious if they were aware of these allegations and, if so, did they speak to Brinsa to clear them up? What did he say that made them comfortable enough to sign him? And, if they weren't aware of these claims, was any simple background check done before making the signing?

While the UFC hasn't responded to me, Dana White spoke to Ariel Helwani about the situation during their talk yesterday. Here's the video:

Ariel: One last thing. It came out today that a fighter that you signed recently, who is going to debut later this year, might have some ties to neonazi-ism. Did you know about this and is he still on the roster?

Dana: You know, it's one of the many cool things that I love about social media. You know, I heard about it instantly through social media and obviously we're looking into it now. He put out a statement saying that he has never been associated. Yes, he was a soccer hooligan; I don't even know what the fuck that means.

Ariel: His nickname is "The Hooligan."

Dana: Right. I don't know exactly what that means. But obviously, the guy's undefeated and we are going to look into it. And if he, in any way, shape, or form is involved in racist groups, neonazi groups, or anything negative like that, he'll be cut. But I don't want to jump the gun, because some people are tweeting stuff, and jump the gun and ruin this guys life if it's not true. So we're going to look into it. I literally have a whole team of lawyers in house looking at it right now in Vegas, and if it's true, yeah.

The story does have another interesting wrinkle. A look at who owns the website for Control Master -- Brinsa's management -- turned up this in the Whois information: 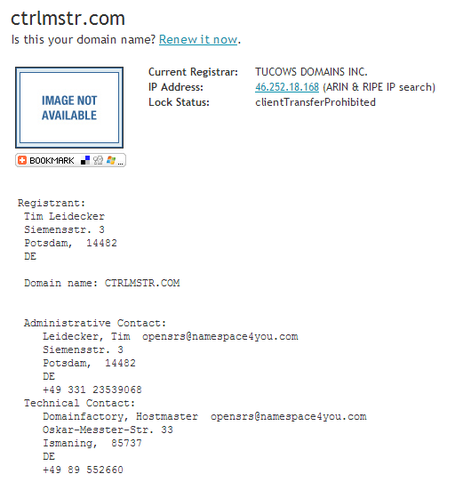 Leidecker has been a writer and journalist for Sherdog and a host of other outlets. Here's his profile from Sherdog:

Born and raised just outside Berlin in the now defunct German Democratic Republic with two sisters and a budgerigar, Tim Leidecker graduated from Espengrund High School in 2000. Having attended the University of Potsdam, where he is studying German philology as well as English and American literature, he has balanced university life with his full-time job at Groundandpound.de, the premier mixed martial arts website for German-speaking Europe, which he founded in 2005.

In 2007, Tim started contributing to Sherdog.com as a European correspondent, analyst and feature writer. His work has also appeared on ESPN.com as well as in Budo International, Fighters Only, Ground & Pound and Karate magazines. When he isn’t working or studying, Tim is cheering on his favorite soccer team in Werder Bremen, playing video games or hanging out at rock concerts. Readers can follow him on Twitter @TimLeidecker.

I contacted Leidecker to ask about his role at Control Master and his claim to me was as follows:

I’m helping Control Master with their PR and media relations.

I’ve stopped working as a MMA journalist. My last article with Sherdog was in May

and I stepped down as head of Groundandpound.de at the end of June.

Two of the basic foundations of journalistic ethics are to avoid conflicts of interest and to remain free of associations and activities that may compromise integrity or damage credibility.

The obvious concern is that, running a site like Groundandpound.de, Leidecker had no way around conflicts of interest that impact the way he would cover the sport. Could he provide honest criticism of a fighter he had a financial interest in? With a controversial fighter like Brinsa, could he report on these alleged Neo-Nazi ties when that would hurt his own bottom line?

Leidecker told me that he sold his 50% share in Groundandpound.de to his former partner in June and didn't begin working with Control Master until July 1.

I asked Leidecker if that is the case, why did he register the website on October 1, 2011. To which he replied:

My friend and now my partner Alfredas Lifšicas asked me to register the domain in 2011, because he wasn’t legally allowed to do so back then. I just did it via the domain hosting package we had at Groundandpound.de to save him money. I also registered a bunch of other domains like mma-news.eu and muckies.de under our hosting package around that time. It wasn’t until this year that I started joining Alfredas in Control Master.

So there was a relationship that existed between Leidecker and the promotional company, and he did register the website, but continues to claim that he had no business involvement until July 1.