Share All sharing options for: Lloyd Irvin hit with new tax lien for over $250,000

Last month Bloody Elbow reported that Lloyd Irvin added to his $287,148.68 tax lien from 2011 with a new lien in the amount of $1,021,440.68. That June 17 judgement was yet another step in the ongoing saga of Lloyd Irvin that has been extensively covered on this site, seeing the well known BJJ/MMA personality and former trainer of UFC stars such as Brandon Vera and Dominick Cruz accused of inappropriate sexual behavior toward female students and allegations of untoward business practices related to his "internet marketing" enterprises.

Earlier today, in the latest USA vs. Irvin case, another tax lien judgement was handed down. This new lien, part of case FL13-1102 in the Circuit Court for Prince George's County was described in the court documents "Lien and Judgment entered in favor of United States of America and against Defendant in the amount of $ 254,686.94 , fd cxd."

Here's an image of the case information from the court website: 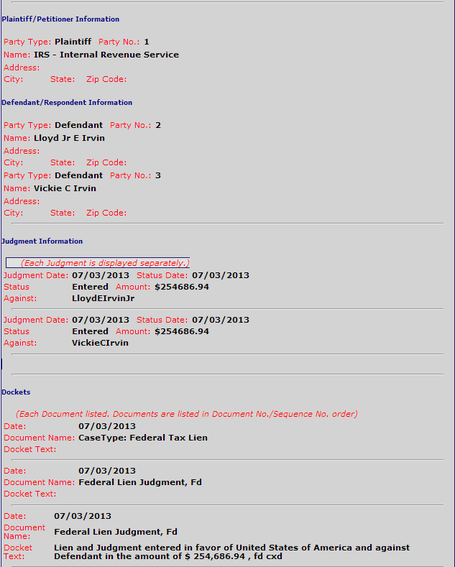 You can read our extensive coverage of this story in our StoryStream.