One of the most highly anticipated fights of the year is happening this weekend. Connor Ruebusch breaks down the striking of Chris Weidman, and the brilliance with which he combines it with his world class grappling.

Share All sharing options for: UFC 162 Judo Chop: The Striking of Chris Weidman

Compared to Anderson Silva, few mixed martial artists have exceptional striking. Chris Weidman is not one of those few and it is reasonable to assume that, like 16 other UFC fighters before him, his striking abilities will pale in comparison to those of the Spider.

But that's okay, because nobody thinks that he has a shot at outstriking the champ, most likely not even Weidman himself. That's because Chris Weidman's strength lies not in his striking, improved as it may be, but rather in his world-class grappling skills. With an impressive wrestling background, an incredible 13-submission Grapplers Quest run, and a competitive ADCC match with Andre Galvao under his belt, it cannot be denied that Weidman is one of the more serious ground threats that Anderson Silva has ever faced.

I mentioned that Chris' striking is improving, and that is true. Though he came to MMA more or less a grappler, he now packs a dangerous array of strikes, including the vicious elbow he used to knock out Mark Munoz last year. Fortunately, Weidman knows where his real skills lie, and he uses his striking primarily to set up his takedowns. It is these set-ups that we'll be looking at today.

Note: to Coach Mike, Tom, KJ, and any other grappling specialists on this site, I apologize for my horrendous ignorance of wrestling and grappling terminology. I'm still a novice in that area of MMA, so forgive my usage of blunt, vague words like "takedown" when more specific terms are probably appropriate.

THE RIGHT HAND AND THE WRESTLER'S STANCE

Wrestlers nearly always stand with the weight on the lead foot and the head mostly centered. Observe Weidman's stance in this college wrestling video.

For the purposes of wrestling, this is a strong stance. Chris' weight is over his lead foot, which helps him to both score and defend takedowns. His head is forward and oriented toward his left knee, bringing his upper body and hands closer to his opponent, while taking his hips out of range.

Unfortunately, this is a pretty horrendous way to stand when strikes are on the table. The heavy front foot takes away power from one's punches and brings the head too close to the hands of the opponent. It's just not viable unless you happen to be gifted with inhuman reaction time. There's another way to facilitate one's takedowns though, and Chris Weidman does it very well.

A long, long time ago, a man by the name of Jack Slack (you may have heard of him) broke down the method by which Chael Sonnen, a wrestler, was seemingly able to outstrike Anderson Silva. Sonnen kept the champ on his toes by using his rear hand, rather than his jab, to set up his takedowns. Jack does an excellent job of breaking down the technique in that article, but I'd like to go over a few other details of this technique, and how Chris Weidman has used it in his bouts. 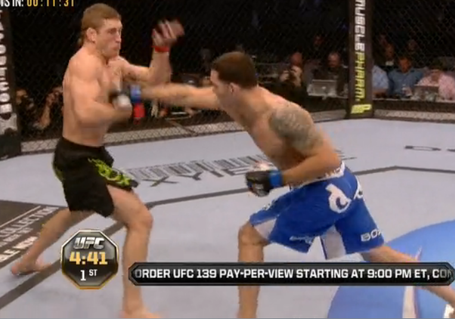 The ending position of a fully extended right hand, or at least the type of right hand that Weidman usually throws, is nearly identical to the starting position of a wrestling shot. The weight moves from the rear leg to the lead leg. Ideally the head moves from right to left, and the fighter's elevation changes as he bends his knees. 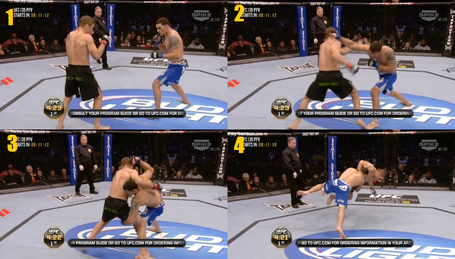 1. Weidman stands in a solid striking stance, lead hand side lined up with Lawlor's center line. Take note of the position of his lead foot relative to the Bud Light logo on the floor.

2. He throws the right hand, moving forward as he does so. Not only does this step help him land on his opponent, which he actually fails to do here, but it also serves as what wrestlers call a "penetration step." Weidman's lead leg comes between Lawlor's feet as his hips drop below Lawlor's hips.

3. Though a little sloppy from a boxing standpoint, the level change does its job well, and Lawlor's counter right hook misses its mark. Now in an advantageous position, Weidman scoops up Lawlor's lead leg.

4. Weidman's lowered hips give him enough leverage to easily change angles and drive Lawlor to the mat.

Good stuff! Chris and his coaches have realized that the same leverage-enhancing movements that add power to a punch also add power to a shot. Getting underneath the opponent applies to both striking and wrestling, and it is Weidman's willingness to commit to his right hand that has allowed him to take down and/or submit so many of his past opponents.

A final advantage of this positional change is that while a right hand can effectively put one both in range and in a strong wrestling stance, the threat of that set-up can also help a wrestler to land the right hand. No one expected Chael Sonnen to drop Anderson Silva with a straight left, least of all Anderson Silva, but it happened (GIF). Chael used the threat of the takedown to catch Silva out of position. Similarly, Weidman used a front foot-heavy stance to bait the attack from Mark Munoz, who certainly didn't expect the brutal elbow that felled him face-first to the canvas. This one deserves to be viewed in motion, so check out the GIF. 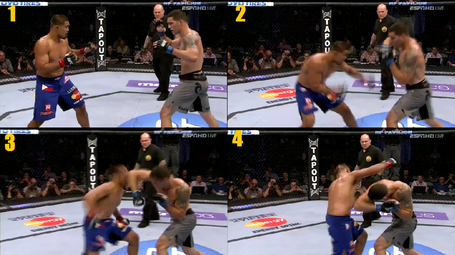 1. Weidman squares himself up to Munoz, adopting a stance that suggests either a takedown or a left hook. His head is centered over his legs, and his weight is forward. Most importantly, this stance does not look like he plans to throw his right hand (or elbow).

2. Munoz sees the false opening and fakes a takedown, hoping to catch Weidman off-guard with his right hand.

3. A tighter right hand might have had some shot of intercepting Weidman's short elbow strike, but Munoz' typical looping fare doesn't have a chance. He runs full-on into Weidman's "soft" right elbow.

4. Realizing that his forehead has sprung a leak, Munoz misses his punch and falls to the canvas. His cries for help go unanswered for some time, however, as referee Josh Rosenthal is busy checking his cell phone.

THE CLINCH AND SCRAMBLES

Despite the fact that it takes place on the feet, the clinch should be seen as merely another aspect of grappling. Not only is the clinch one of Weidman's best positions from which to use his dazzling array of throws and trips, but it affords him plenty of opportunities to utilize his impressive scrambling ability. We tend to think of scrambles as things that happen on the ground, and that's largely the case, but Weidman's scrambling skills carry over very well to wild up-close exchanges on the feet, especially when it comes to snatching up submissions during transitions. Take a look at his finish of Jesse Bongfeldt (and the GIF, too): 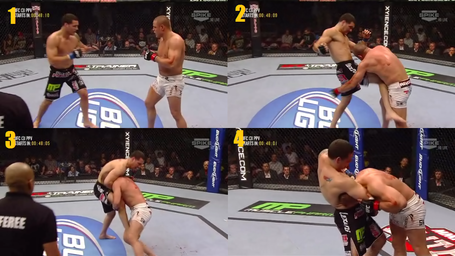 1. Weidman prepares to launch into a long knee against Bongfeldt. Just to note his improvement over time, compare his rudimentary stance here to the starting positions we saw in the last two images.

2. He steps into a huge knee that crashes into Bongfeldt's ribs as he changes levels, forcing him to bend forward even further.

3. Bongfeldt thinks about the takedown, but Weidman has already grabbed a front head lock that quickly becomes a vice-tight no-arm guillotine.

4. Weidman forces Bongfeldt to tap with seconds left in the round.

Already in this fight Weidman was showing huge improvement over the grappler who struggled with Alessio Sakara in his UFC debut. His ability to think of the submission finish even when engaged in striking exchanges is impressive. Few fighters share his focus or his near-seamless transitions.

Chris Weidman is not the first fighter to combine striking with an excellent grappling background, but few do it with the same level of skill. The impressiveness of his relentless first round submission attack on Mark Munoz is only enhanced by the grace with which he finished him on the feet in the second round. Any fighter with that sort of flexibility and well-roundedness is going to be a threat anyone, and Chris Weidman is certainly a threat to Anderson Silva.

Does he have defensive holes? Absolutely. But frankly, they're hardly worth going over. Weidman tends to back straight up when put on the defensive, and cover up with poor posture, leaving him susceptible to Anderson's dreaded Thai clinch. He's also fond of parrying punches while slipping to his left, which might cause him to lean right into an Anderson Silva head kick a la Yushin Okami (GIF).

So yes, there are weaknesses there. But Anderson Silva is the greatest striker the sport has ever seen, and it doesn't take much of an opening for him to find a fighter's chin. He probably won't have much trouble finding Weidman's. But if all goes according to plan, this shouldn't be a matchup in which Weidman decides to test out his striking skills. His success in this bout depends on his ability to threaten Silva with the takedown, giving him the choice to either stand out of position to defend strikes or get put on his back. We'll see how well he can implement that strategy this Saturday.