UFC on Fox 8 Judo Chop: The Best and Worst of Demetrious Johnson

This weekend's UFC on Fox card gives us the third flyweight title fight in the organization's history, an unheralded clash between champion Demetrious "Mighty Mouse" Johnson and John Moraga. Connor Ruebusch breaks down the striking skillset of the champ.

Share All sharing options for: UFC on Fox 8 Judo Chop: The Best and Worst of Demetrious Johnson

Demetrious Johnson gets a bad rap these days. Similar to Ben Henderson and Georges St. Pierre, he catches lots of flak for his long string of decision wins (thus Frankie Edgar's popularity remains a mystery). But DJ is an excellent fighter. In fact, he's probably the perfect man to serve as the UFC's first ever flyweight champ. After a very impressive career, with his only two losses coming to top bantamweights, it seems that Mighty Mouse has finally found a division made for a man of his stature. A naturally small man (he claimed that he only had to cut out pizza and ice cream during camp to be able to make 125), Johnson has incredible stamina, outstanding wrestling, and a diverse striking game.

Today I'm going to take a look at those striking skills. Talented as he is, Mighty Mouse will be facing a tough opponent in John Moraga, and I have no doubt that Moraga is capable of capitalizing on some of the holes in the champion's game. First we're going to break down what DJ does well, and then we'll talk about his greatest weakness.

No surprise here, right? It's not perfect, but Mighty Mouse's footwork is probably the best in the division. You'll hear "good footwork" said about most quick-footed fighters, and it's usually not true. Johnson, however, possesses both a pair of very fleet feet and some of the best footwork set-ups in the UFC. Here's one set-up he is particularly fond of. 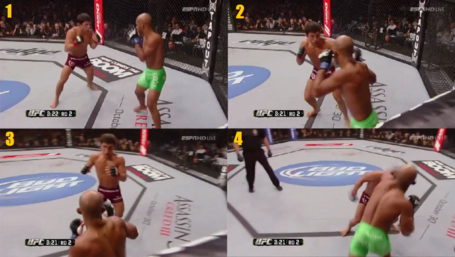 1. Mighty Mouse has backed himself up near the cage.

2. He begins circling to his left.

3. And Joseph Benavidez commits to following him.

4. At which point Johnson reverses direction and lunges forward with a left hand that glances off of Benavidez' head.

Mighty Mouse used this type of trap throughout the fight, taking advantage of the fact that Benavidez was not able to effectively cut off the Octagon, and instead resorted to following Mighty Mouse wherever he went. This is similar to a tactic that has been used with great success by Lyoto Machida and, with an even higher level of execution, boxing great Willie Pep. Here is a highlight of Pep's tremendous footwork.

If you want to know how good footwork can be, you really should watch this whole video (and then all the Willie Pep videos you can find after that), but for the purposes of this article, Pep uses the exact same set-up as Mighty Mouse several times starting at 0:45. Like Johnson, Pep is comfortable switching stances in order to walk his opponents into his punches.

Aside from setting traps, Johnson uses his footwork very well to avoid his opponents, which is fortunate, as it's just about his only method of defense (more on that below). Most impressive are his pivots. 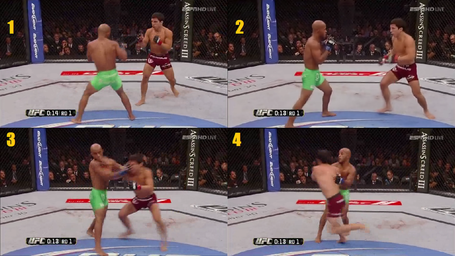 2. He switches from southpaw to orthodox, and Benavidez attempts to take advantage of the switch with a combination.

3. As Benavidez rushes forward, Mighty Mouse leans just out of the way of his punch...

4. And pivots to his left, letting the rushing Benavidez literally run right past him.

You can't fight a guy like Johnson by moving in straight lines. If you constantly strafe side to side, you'll never get closer to him, and if you rush straight forward, he'll pivot and leave you swinging at air. The trick is to either get a hold of him (tough, because his clinch and wrestling game is outstanding) or to advance on him in diagonals, moving both forward and sideways at the same time. Benavidez didn't have the skills to do this to Mighty Mouse; this Saturday we'll see if Moraga does.

Alright, now for the flaws. Hard as he is to catch, Demetrious Johnson is not terribly hard to hit once you've closed range. Of course, that's no easy feat, but the truth is that Johnson has relied on his speed and footwork to defend attacks. The problem is, he's not fighting 135 pound behemoths anymore. Now he's fighting natural flyweights, some of whom are as fast as him. John Dodson was one such man, and the cracks in Mighty Mouse's talent-based defense really started to show in that fight. 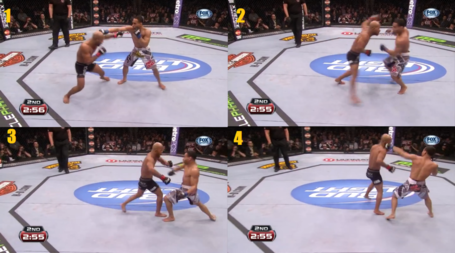 1. Johnson feints a jab from well outside of range.

2. And runs forward with a ridiculous combination from which Dodson steps back.

3. Dodson switches stances, pivoting to his left, and Mighty Mouse ends up moving past him in a very compromising position.

4. Dodson catches him on the jaw with a winging left hook, sending Mighty Mouse to the canvas.

Unlike Moraga, whose built-in defense I praised earlier, Johnson's head rarely moves with his punches. He relies on his incredible speed to hit opponents before they can hit him back, but against equally fast (or equally savvy) opponents, that doesn't always cut it. In the frames above Mighty Mouse was probably expecting Dodson to backpedal from his onslaught, perhaps setting him up for a kick. This notion is backed up by Johnson's footwork which, as you can see in frames 1-3, is hardly advantageous for boxing. But Johnson not only begins his assault from out of range; he charges in face-first, throwing looping punches with little intent behind them. Dodson's single left hook carries far more heft than Johnson's three uncoordinated punches, and he uses Mighty Mouse's own favorite tactic against him, changing angles on his rushing opponent.

Johnson also has virtually no head movement. Instead, he prefers to use his feet and hands to avoid strikes, but he frequently does so in a very risky way. 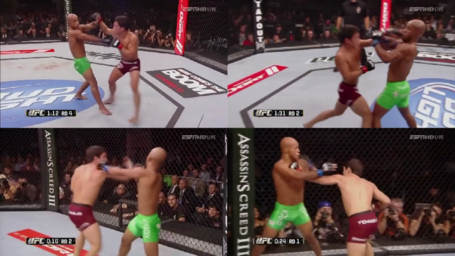 In this collage, Johnson is attempting to avoid the powerful punches of Joseph Benavidez, but he consistently does so by leaning back, reaching at the punch with his hands, and standing straight up. Thanks to Chris Weidman, just about everybody now realizes why leaning away from punches can be dangerous, but Johnson's worst habit is the fact that, in every one of these stills, his knees are almost completely straight. He stands up tall when he backpedals, taking away his own base. A body without bent knees is like a car without shocks. There is no spring there to absorb the blow should it land and, as you can see, it's certainly not impossibly to touch Johnson's chin.

Moraga's boxing has looked both very impressive, against Ulysses Gomez, and very underwhelming, against Chris Cariaso. It's very difficult to say whether or not he'll be able to match the incredible footwork of Demetrious Johnson. For Johnson's part, he is improving, and has been for several fights. It is possible that we see an even smoother Mighty Mouse than ever before, with much improved boxing skills. But with his reliance on speed and athleticism, it's only a matter of time before someone catches him with something hard enough to stop his feet from moving.

Hopefully these articles have convinced you that this fight is indeed worth watching. Despite the lack of hype, Moraga is a serious threat, both standing and on the ground, and Demetrious Johnson is an incredible athlete and a fantastic fighter. I for one cannot wait to see this historic flyweight clash on Saturday.

You will soon be able to hear more of Connor's analysis on his podcast Heavy Hands, debuting soon. Check out heavyhandspodcast.com.