UFC on Fox 8 Judo Chop: The Best and Worst of John Moraga

The UFC's eighth event on Fox gives us the second title defense of flyweight champion Demetrious Johnson, against the unheralded John Moraga. Connor breaks down the impressive boxing skills of Moraga.

Share All sharing options for: UFC on Fox 8 Judo Chop: The Best and Worst of John Moraga

UFC on Fox 8 should be about the flyweights. The title of the UFC's newest division is on the line for the third time in history, but the thunder has been stolen somewhat by the co-main event, a welterweight clash between Jake Ellenberger and Rory MacDonald. Worse, the card has been ravaged by a series of injuries, which has likely soured more than a few people on the event altogether. And, worst of all, most people don't even seem to know who the challenger to the flyweight throne is.

The idea of a relative unknown fighting for the belt is almost completely foreign to the Zuffa-era UFC, an organization in which fame often seems to be even more important than actual achievement when it comes to title shots (Chael, I'm looking at you). John Moraga, however, deserves far more hype than he is getting, and I expect his name to be much more familiar in a few days. His career so far has been built on the back of his wrestling and submission skills, with six of his eight finishes being subs, but he's actually a very polished boxer, with much more threatening strikes than his record would have you believe.

"Evasive punching" might be a bit of an awkward way to put it, but what I'm talking about here is head movement that is built into an attack. When Moraga punches, he is difficult to hit with clean counters because of the way his body moves with every strike. Let's take a look at my favorite sequence from his fight with Ulysses Gomez. 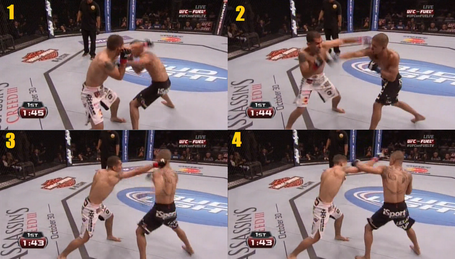 1. Moraga feints and slips the expected jab counter, firing off a jab of his own in response.

2. Moraga throws a 1-2, both punches missing the mark.

3. Gomez tries to make Moraga pay for missing, but Moraga pulls back, preparing to throw a left hook, and Gomez ends up reaching for him, his punch going right past Moraga's head.

I love this sequence. Moraga's boxing has a certain understated brilliance to it that you rarely see in MMA, and that I certainly did not expect from a submission wrestler. His first jab is accompanied by a right slip. Not only does his head move off line, but his entire body changes elevation - perhaps the most overlooked aspect of slipping. As a result, Gomez's punch sails right over Moraga's shoulder. At the end of Moraga's failed follow-up right hand, his head has moved over his left hip, causing Gomez's jab to miss. As he pulls back to throw a left hook, Gomez tries to hit him again, but Moraga's head is once again a moving target, now situated over his right hip. This same movement - from one hip to the other - also adds power to Moraga's punch. He connects not only because of his advantageous position, but due to Gomez's own overextended posture and missed right hand bringing the head into striking range.

Moraga excels as an aggressive counter striker. He is at his best standing when he can pressure his opponent, feinting and jabbing them until they try in desperation to attack and leave themselves open. This is the method that allowed him to starch Ulysses Gomez in under four minutes, a fight in which he only moved backward long enough to evade an attack, and then came forward once again, forcing Gomez up against the fence and picking him apart.

Moraga's fight with Chris Cariaso was a different story. Though Moraga arguably won the first two rounds and sealed the deal in the third with a creative front choke against the fence (GIF), he was visibly flummoxed at numerous points by Cariaso's southpaw, kick-heavy style. He was at his worst in the second round when Cariaso kept him on the defensive with powerful kicks to the head, body, and legs.

1. Moraga winds up a left hook, his go-to counter in this fight, as Cariaso launches into a left round kick.

2. Moraga's hook falls short, while Cariaso's kick is at the perfect range.

Fortunately, Moraga anticipated this attack by keeping a tight block with his right hand, absorbing much of the force of Cariaso's kick. But he should never have eaten the kick at all - at least not the way he did.

In the first frame, Moraga is standing at the perfect range for Cariaso's kick. In the second frame, he is still at that range, right in the power arc of the strike. Absorbing a full power kick on the forearm is never a good idea. Moraga would have been better served by either pulling back out of range, or stepping in with his hook, which would have effectively jammed Cariaso's kick.

Exchanges such as this one happened throughout the fight. Moraga would either try a winging left hook as Cariaso came in, which worked alright - until Cariaso realized he could just throw left head and body kicks, battering Moraga's arm to pieces; or Moraga would lunge in with a right hand, trying to tag Cariaso from kicking range. 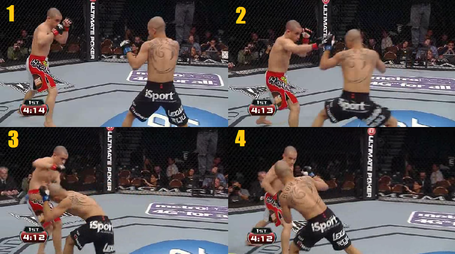 1. Moraga and Cariaso are both out of range. Neither of them should be able to hit each other from this distance.

2. Moraga closes the distance by leaping in Shotokan-style.

3. Cariaso easily steps back away from Moraga's telegraphed right hand.

4. And Moraga ends up woefully out of position.

In this sequence, it's pretty clear that Moraga, at least at this point in his career, did not know how to hit a quick, southpaw from range. Throughout the fight he attempted numerous similar right hands, throwing them at a distance from which they had virtually no hope of landing, while giving Cariaso every opportunity to counter with his vicious kicks.

Unfortunately, I think we can attribute this apparent lapse in boxing ability to Moraga's coaches. Between rounds one and two, coach Trevor Lally has this to say: "We need to beat the foot, there's no more outside leg kicks, okay? Right hand busy. Beat the foot, he can't get to your lead leg outside."

This is a bit of "conventional" orthodox vs. southpaw wisdom that falls completely flat in this case. Lally wants Moraga to get his lead foot outside of Cariaso's lead foot which, theoretically, should open up the lane for his right hand. This is obviously the intent of his instructions, as he expressly tells Moraga to keep his right hand busy.

The problem with this advice is that it doesn't really address the problems Cariaso presents to Moraga. Throughout the fight, Cariaso does a better job of controlling range. Chris gets tagged when he comes in with punches, but nearly every kick lands hard on Moraga, even when blocked. Though Lally seems concerned with the outside leg kick and the right hand, the real issue is that Moraga isn't actually able to get a bead on his opponent. Why?

Moraga schooled Ulysses Gomez using his jab, controlling the distance and pressuring Gomez's center until he was able to put his back to the fence. Against Cariaso, his jab was virtually non-existent. He threw repeated right hands and left hooks, nearly all of which missed or glanced off the intended target. Lally's conventional wisdom would have it that the jab is less effective against southpaws, but the opposite is true. The jab is crucial against southpaws, when the distance between the two fighters is often so much greater. Without a distance weapon, Moraga was left looking very underwhelming on the feet.

Has Moraga learned from his mistakes? It's hard to say. What is clear, however, is that he is preparing to face an opponent with a fondness for switching stance. Hopefully, Moraga doesn't resort to boxing aphorisms when he faces this problem, but instead goes to what he knows works: the jab, and constant, relentless pressure.

Check back tomorrow for my breakdown of Demetrious Johnson's striking skills.

UFC on FOX 8: previews, analysis and predictions for the entire card