UFC star Roy Nelson gets into Twitter beef with sponsor

Ultimate Fighter winner Roy Nelson took to social media to express his grievances with a sponsor only for the owner of the apparel company to fire right back. Brent Brookhouse looks into the sponsor's long history of ugly disputes with fighters, customers and business partners.

Roy Nelson took to his Twitter account this past Thursday to complain that Cage Fighter athletic brand, sponsor of Daniel Cormier, Kyle Dake and Jordan Burroughs, has outstanding pay that they still owe to fighters and wrestlers they have sponsored. The ensuing exchange between Nelson and Cage Fighter owner Mike DiSabato was...interesting.

Here's a screenshot (via Gareth White on The Underground) of the back and forth, which started with Nelson telling Cormier to get his money up front:

While Nelson doesn't specify to which fighters DiSabato owes money, there is a lengthy history of controversy involving DiSabato.

Dan Henderson sued MMA Authentics in 2008 when DiSabato was the company vice president:

The suit, which seeks both monetary and injunctive relief, claims MMA Authentics owes Henderson $50,000 plus undetermined royalties under a contract he signed with the Ohio-based apparel manufacturer on July 27, 2007. The company sells clothing under the Cage Fighter, MMA Authentics and Familia Gladitoria brands.

According to the suit, MMA Authentics failed to pay Henderson a second $30,000 guaranteed royalty down payment that was due by May 1, 2008 plus subsequent royalties of 15 percent of the gross proceeds for Henderson licensed products and four percent for non-Henderson licensed merchandise through the Cage Fighter and MMA Authentics brands. The document also states that MMA Authentics failed to "provide adequate quarterly accounting statements as required by the Contract" to determine what said royalties are.

The lawsuit also contends that MMA Authentics refused to pay an additional $20,000 sponsorship fee for logo placement Henderson donned on his clothing during his appearance against UFC middleweight champion Anderson Silva at UFC 82 last March.

In his complaint, Liddell alleges that MMA Authentics, which was later taken over by Ultimate Brand Management and has also operated under the Cage Fighter, MMA Elite, and Familia Gladitoria brands, breached a 2007 agreement with Liddell that allowed them to make clothing and headwear bearing Liddell’s image, name, and/or signature in exchange for paying him 15 percent of the gross proceeds from the product sales. Liddell also claims that in breaching this contract, MMA Authentics invaded his privacy and engaged in unfair business practices under California law.

The crux of Liddell’s complaint relates to two provisions in the 2007 contract. First, the contract states that MMA Authentics’ use of Liddell’s likeness is for clothing and headwear products only; the agreement does not explicitly give MMA Authentics rights to make and sell any other "Liddell" products. The second critical contract provision obligates MMA Authentics to obtain Liddell’s approval on production samples and/or artwork for the merchandise before selling it.

According to the complaint, Liddell discovered in August 2008 that MMA Authentics was selling more than just clothing and headwear -- they were selling "novelty items" with Liddell’s likeness on them as well. He claims that not only were these items never part of the agreement; he also never approved them.

In 2009 DiSabato's prior company Silver Knight lost a court battle with an ex-partner. Globex International Inc. was awarded $4,500,000 after suing Silver Knight and DiSabato:

A jury agreed, and on March 10 found in favor of Globex on all counts.

DiSabato says the jury was taken in.

"Here we have a 72-year-old man worth millions of dollars who claims I formed a partnership with him the first time I met him over a 20-minute conversation," he said.

Globex then had to go back to court, claiming that DiSabato transferred the Silver Knight business to MMA Authentics. In the end Globex was chasing down DiSabato for $5.3 million after legal fees and interest were added by a judge.

In a strange turn, DiSabato tried to sue Ohio State University because they ended Silver Knight's licensing deal. He claimed the licensing deal was ended after he complained in public about OSU landing a deal with Nike.

In the end, DiSabato and the university were able to reach a settlement that allowed him to sell off his remaining merchandise, but had to pay almost nine percent more in royalty fees than under the normal deal. The money from those sales, of course, was sought by Globex.

DiSabato has also sued other companies he formerly worked for and has been sued by employees as well as defaulting on a loan related to MMA Authentics, resulting in an order to pay Huntington National Bank nearly $1,000,000.

DiSabato hasn't been making fans lately either. When 2012 Olympian Jake Herbert asked wrestling clothing companies to "step up" and help with the cause to save Olympic wrestling, DiSabato responded by calling Herbert "not marketable," "a [sic] arrogant prick" and a "douche bag" as captured in this screenshot from Wrestling Facts 1's call to boycott Cage Fighter: 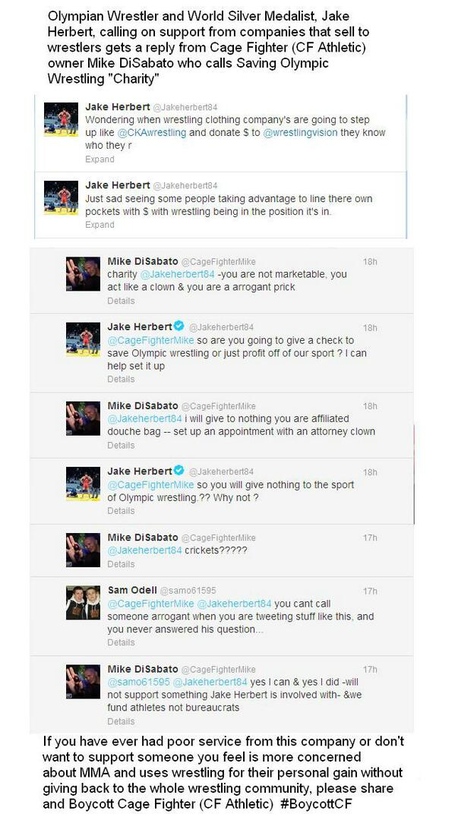 And, looking around high school wrestling forums reveals stories like this one from Jason Roush, then coach of Glen Este and now head coach at Elder High School in Ohio:

We ordered our team gear through Cage Fighter this year. We know the kids like the look of fight shorts and we loved the fact that Cage Fighter partnered with USA Wrestling. Unfortunately, it has not been a smooth relationship at all.

We ordered the gear in October and were told we would have it in time for our first competition. We called the week before our first competition and were told once again that we would have the gear in time. The week of, we called again (about 3 days out) and were told, sorry we are really backed up and we won't be able to get you your gear. Mike DiSabato (the President) gave us his personal contact so we could talk to him about our situation (which we thought was pretty good of a "big wig" to do) and he helped get us the shorts at least before our first tournament, but we did not get our T-Shirt, Sweatpants, Sweatshirts, or bags. We were told once again "you will definitely have the rest of your gear by next Wednesday before you next competition." Wednesday rolled around and nothing. We send MULTIPLE emails asking where our gear was as we had a home dual and all we had was team shorts. Luckily our gear came via UPS late Thursday night. Unfortunately, half the gear was printed differently, some of the logos were on the BACK of the sweatpants, some of the items had stains on them, and still no bags.

It is now January and we still have no bags. We contacted Cage Fighter asking about the rest of our order THAT WE PAID FOR IN OCTOBER and we were told NO we were not getting the bags until our athletic director contacted them (which he has tried to do twice - with no answer) because they are upset we have told others the truth on social media.

Talking to other local coaches and seeing the posts like the one above, I know we aren't the only ones in this boat, but because we have voiced out displeasure now they are holding our gear we have already paid for. In one email DiSabato said if you have any other complaints (about the crappy product we got) you can come to Columbus and speak to me face to face - like he wants to fight or something.

Needless to say, we will never go through this company again. It has been an awful experience - and our kids who have paid for their gear are still waiting on their bags.

The last two threads have been shut down - but maybe since someone from Cage Figther started this one, it will stay up.

Again, Nelson was very vague about who he believes Cage Fighter owes money to, but these stories are likely why some were so quick to believe that there was something to Roy's words.

Bloody Elbow has reached out to Nelson to ask for him to explain his allegations as well as reaching out to DiSabato to get comment on Nelson's comments and the other matters covered in this article. We will provide updates if and when they become available.