Over the last months there has been a resurgence of the discussion on the way the UFC financially rewards its fighters. Some has been focused on the percentage of the total company turn over that is spent on fighter pay. Some has been focussed on the pay of lower tier fighters and their struggle to make ends meet. And some on the way the fighter bonuses are distributed amongst the fighters.

I would like to add some additional fuel to fire and perhaps provide a fresh perspective in the discussion. The data in this article are what I have been able to find online. This article is neither meant as a scientific study ( for which I lack the patience and time ) nor as an exercise in accounting ( of which I know too little ). I do think however that the compilation of this data provides a better insight in UFC fighter pay.

The elephant in the room.

The big unknown factor in all the discussions is the ‘locker room bonus’. This infamous bonus is invariably brought up by Dana White when he reassures us that the UFC takes really good care of their fighters. It also come across as both the carrot and the stick with which Dana White motivates and manages his fighters. This mystery bonus makes discussing fighter pay complicated, since it's virtually unknown and could make up a substantial amount of the fighter pay.

On rare occasions have fighters spoken about this locker room bonus. Sean McCorkle has discussed fighter pay, he explained that the UFC paid him 150% of their contractual obligations. For all his three fights ( 1W, 2L) he received a discretionary bonus. How much he received in total however, is unknown.

Another fighter that has spoken out on his earnings while employed by the UFC is Jon Fitch. In this video he goes to some length to discuss fighter pay (fig. 1). It is the most detailed account we have of a fighter discussing his total earnings ( without sponsor money ) while being employed by the UFC. These make clear that the UFC paid Fitch and average additional ‘locker room bonus’ of between 25% and 30%. If there is any conclusion can be drawn from these testimonies, it is that different fighters get different discretionary bonuses and that this is not dependent on whether you are successful in the cage or not. This could be one of reasons why Fitch felt that the UFC environment wasn’t welcoming. 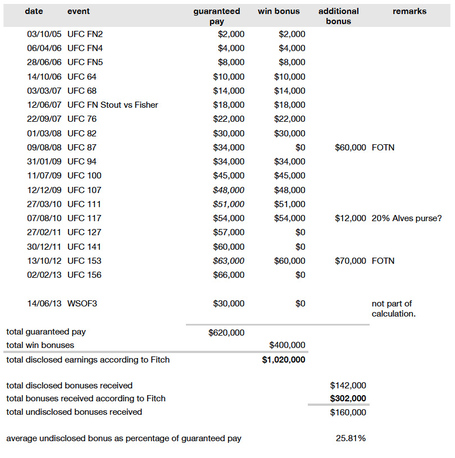 These numbers are based on the ‘official’ numbers presented by Jon Fitch himself and what is available on the internet. Companies, like the UFC, that organize live events usually have a large amount a cash flowing around during the event days. It could very well be that there have been discretionary bonus handed out to Fitch have which have not been recorded in the books. Bonuses could also easily take the form of a payment in goods; think cars, holidays, watches, etc. The very nature of the discretionary bonus makes it very hard to gauge the impact it has on a fighters life.

Below ( fig. 2 ) is a graph that plots Fitch’ earnings over his career ( including his first WSOF appearance ). It illustrates the development of fighter earnings for a successful career in the UFC. It highlights the importance of getting the win and the impact a loss or injury can have on a fighters yearly income. It also shows that in spite of what Dana White thinks, fighters do not fight three times a year. Fitch fought 9 times in his last 48 months with the UFC. When the rather fickle nature of the discretionary bonus ( average only 26% in Fitch’ case ) is taken in account , it is clear why some fighters opt get the ‘W’ instead of taking risks in the cage and leaving it in the hands of Dana White. 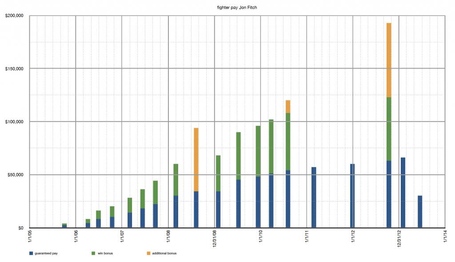 On of the ways Dana White has defended the way the UFC pays its fighters is by comparing the UFC and MLS. This claim has already come under scrutiny on this website. In his statement Dana White explains that a fighter in the UFC gets $50k / $50k and that they will fight, and win, 3 times a year, totalling $300.000. The 3 times a year argument has been debunked in the article by Ian Kidd aka Decado. I wanted to take a look at the claim Dana White makes about the $50k to show and $50k to win, a salary at which he thinks fighters should be able to focus on fighting and not worry about overhead costs.

To get an understanding of what the UFC pays its top fighters I have compiled a list of the guaranteed pay it pays to its top 15 fighters across the different the weight classes. I have excluded female fighters since there have not been enough fights in the to provide meaningful data. The rankings used are the rankings from Sherdog.com, not the official UFC rankings. This to include fighters who are ranked 10 to 15, without too much brain-picking. In total 96 ( 80 %) of the 120 ranked fighter are under contract by the UFC, they represent around 27% of the total fighters currently employed by the UFC.

( Note: While compiling this data UFC 162 took place, some of the data might not be up to date. ) 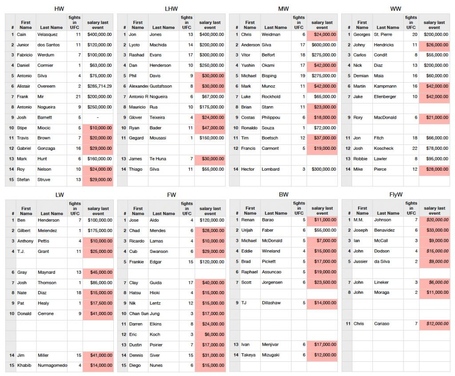 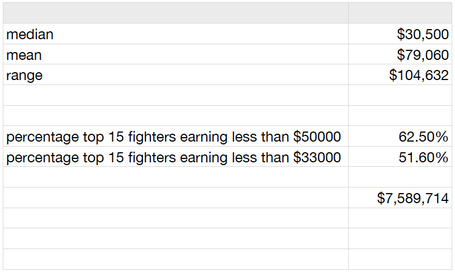 What becomes immediately clear from this overview, is that there are many, many fighters that are currently not making $50k / $50k. Also, the lighter weight classes are making substantially less money than the heavier classes. In the lighter half of the UFC roster there are only 6 fighters that make more than $50k guaranteed pay. Further analysis ( fig. 4 )reveals that although the average guaranteed pay is $79.060, the median pay, the pay at which 50% of the fighters earns more and 50% earns less, is only $30.500. Combine that with 1,94, the average number of fights per year and it is a long way to get to the $300.000 that Dana White thinks his fighters live on.

(Note: I have crunched many more numbers, they are available if you are interested.) 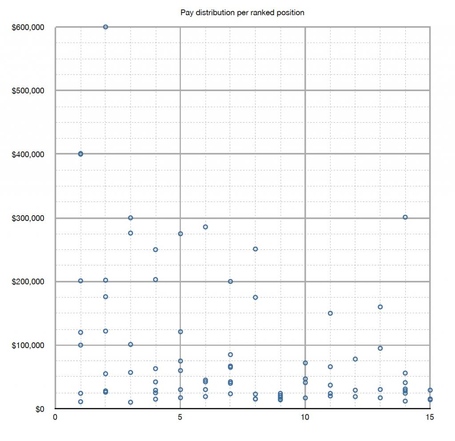 If we have a look at how the fighter pay as a function of the ranked position ( fig. 5), something else becomes clear. Some fighters with relative few fights under their belt suddenly shoot up and become top contenders. Three out of the eight champions, contractually make less than $25.000 per fight. One of the great benefits of having the locker room bonuses is that it allows the UFC to have a very flexible pay structure without having to re-negotiate fighter contracts all the time.Rising stars can be compensated while they fight their way to a new an better contract. This flexibility is one of the main benefits for the employer of having a low contracted guaranteed pay and a performance bonus. There is an argument to be made that the UFC needs this kind of pay structure since so much of it’s revenues depend on fighter performance.

What is harder to understand is that the majority of the fighters in the top 15 don’t earn the kind of money where their boss thinks they can fully concentrate on being a fighter. These guys represent the top of each weight class under contract by the most important MMA organisation in the world. In an optimal situation these fighters should not have to worry about the possible financial repercussions of a loss. That way they are free to go out and do what they do best, fight to win instead of fighting not to loose. In a game where the mental aspect is so important, the possible financial implications of a loss have to be a draw back. The stick part of the discretionary bonus / the low guaranteed pay, to me, seems at odds with fighters fighting the most entertaining fights.

The UFC would benefit from providing their fighters with a better perspective on the path to becoming a full time professional fighter. With about 40 fighters per weight class, breaking the top 15 seems to be a first mile stone.If a fighter can't make that, they know they're not elite level, will struggle and at some point should probably think of doing something else. Instead of paying newcomers $20k / $20k make it clear that if they can make it to the top 15 they will be compensated in a way that allows them to fully focus on being a professional athlete and becoming the no. 1. There is a big difference between someone who fights for a living and a professional fighter, the wave of injuries that flood the UFC is, in my opinion, a clear indication of this. At this time, however, there is no guarantees that if a fighter makes top 15 or even top 5, he will be able to afford the trainers, coaches, medical supervision, nutritionists etc. that are needed to help bring them, and the sport, to the next level.

The discretionary bonus as an instrument to allow for additional compensation of fast developing new fighters makes sense. However, there are plenty veteran ranked UFC fighters on their 2nd, 3rd or even their 4th contract that still do not make $50k / $50k in guaranteed pay and that are still dependent on the discretionary bonus to supplement their income (fig. 6). If we take into account what has been said about the discretionary bonus by Sean McCorckle ( 50 % ) and Jon Fitch ( 26 % ), it seems highly unlikely that someone like Nate Diaz, with 18 fights under his belt, goes from a $15.000 guaranteed pay to $50.000. If so, it seems almost perverse to have a contract with such a low guaranteed pay. ( Or might this be one of the famous Diaz brothers tax tactics. ) 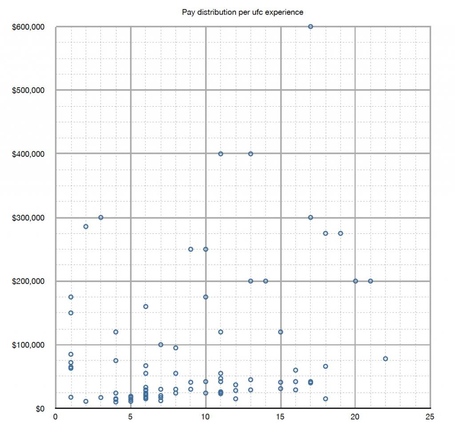 fig. 6 guaranteed pay per experience, # of fights in the UFC.

By his own admittance, Dana White thinks that $50k / $50k, or $300.000 a year is a good salary for a UFC fighter. Fighters earning this amount of money can focus on fighting without worrying about overhead, but still ‘have to take jiu-jitsu and do all these other things’. However, more than half ( 62% ) of the top 15 fighters employed by UFC do not make this kind of money as a guaranteed income. It means that 62% of the top roster is dependent on the discretionary bonus to supplement their guaranteed pay to the level where they can just focus on performing optimally as a fighter.

For the sport to continue to develop fighters in the top 15 should be able to be professional athletes. Currently the UFC is not providing them with the financial security that allows them to do so. The discretionary bonus ( between 50% - 26 % of the contracted pay ), no doubt, plays an important part of why the UFC takes good care of their fighters. Dana, I trust you. This bonus should be nothing more than the cherry on top.

Raising the top 15 guaranteed pay gives starting fighters and lower tier fighters a perspective of what they can expect and work towards. No starting fighter should immediately get $20k / $20k, but if the sports wants to continue to develop, the top 1/3 of the organisation should be able to train, live and fight like professional athletes of their guaranteed pay. We have outgrown the storyline of the dad fighting for survival and wanting to provide a better live for his children, this is a sport, not some kind of physical game show.

As long as the guaranteed money for top fighters remains this low and the discretionary bonus is an essential part of the basic fighter income, the fighters are put in a subservient role. After the fight is over they return to their dressing room, and anxiously wait for Dana White to give his blessing or show his wrath.