This FanPost was Promoted to the Front Page by Anton Tabuena

UFC middleweight "The Filipino Wrecking Machine" Mark Munoz will return to the Octagon next month at UFC 162 vs. Tim Boetsch. Mark's return is notable to me due to the duration of time he has been inactive (one year), and the fact that he has been plagued not only by injury but depression, self-doubt and weight gain. His last bout was a loss to Chris Weidman at UFC on Fuel TV 4 in July of 2012.

Munoz underwent surgery on his right elbow in January 2012. This injury was apparently one that he had been dealing with for some time, but it became acutely worse when his elbow locked in a flexed position while training for his scheduled fight with Chael Sonnen. He ultimately withdrew from that fight. In a June 2012 interview, he noted that the surgery restored near full extension to the elbow, leading to improved striking since he could finally throw straight punches again instead of being limited to hooks. The amount of debris removed from his elbow was amazing. The picture below shows some 20 separate bone chips and spurs that were removed either from the joint space or from the joint surfaces of the elbow. 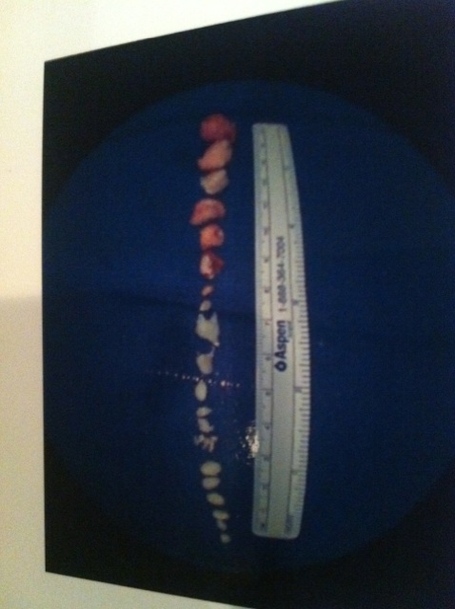 The elbow is a very compact joint, and there is not a lot of space for loose debris to float around. When his elbow locked, there was probably a piece of loose bony debris that became trapped between the joint surface of the ulna and humerus bones.

Mark's 2012 injury saga was not yet finished. He injured his foot while training for the Weidman fight. Following the loss, he was diagnosed with fractures of his 4th and 5th metatarsals. Earlier today, I asked him via Twitter if he had surgery for this injury, and he told me that he did not, but was immobilized for 4 months in a walking boot.

During his time away from training, Munoz admits that he battled depression and excessive weight gain related to overeating. He attributes his depression to his poor performance against Weidman combined with the realization that he had another injury that would keep him out of action for an extended period. He discusses these topics and his injuries in this interview, comparing himself to Fat Bastard of Austin Powers movie fame.