A Bloody Elbow series that focuses on the foundational techniques of different martial arts and those unique to Mixed Martial Arts. In this installment, Connor Ruebusch looks at a fundamental technique of Muay Thai that is often overlooked and underappreciated in MMA circles: the teep.

Share All sharing options for: Bloody Basics: The Teep

Today we're looking at the teep. Before we begin talking about proper form and application of this excellent weapon, let's first differentiate it from another strike that it is often confused with: the front kick. It's often argued that the front kick is a strike and the teep a push, which is why it's also called a "push kick." And while this is often the case, the teep can be thrown as a hard-hitting strike as well, and it certainly does accumulative damage however it's utilized. The real difference between these two kicks is the trajectory, plain and simple. A front kick connects from underneath, the ball of the foot moving into the target at an upward angle.

So this famous knockout... 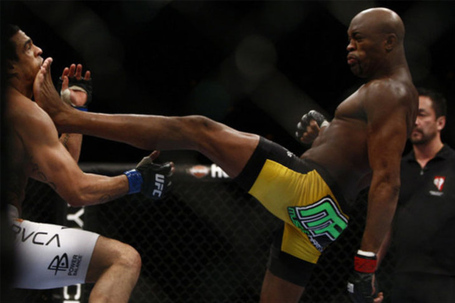 ...was the result of a front kick.

This kick, on the other hand... 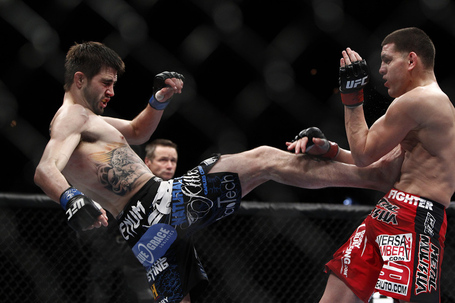 Both kicks can be thrown to the body or head or, in a self-defense context, the groin. Both kicks accomplish different goals. To put it simply, the teep is like a straight punch, and the front kick is like an uppercut.

The teep is a technique close to my heart as it comprises a pretty big part of my personal Muay Thai game. The kick serves exactly the same purpose as a boxer's jab, except that it obviously has a substantially longer effective range. In fact, another common name for the teep is the "foot jab." Like a jab, the teep is capable of doing damage, though its effects are usually attritive rather than instantaneous. More importantly, the teep controls distance. In the Bloody Basics on Stance, and elsewhere, I have talked about the importance of distance control in any fight. It is my opinion that distance control is the single most important aspect of striking. Not only is the teep a longer strike than the jab, but it is quick and has far more stopping power, being more than capable of taking even a slightly off balance opponent off their feet.

Let's watch one of the fights of arguably the greatest nakmuay to have ever lived, Samart Payakaroon. Watch the way he controls the distance between he and his opponent from the very beginning of the fight. His teep is crucial to this aspect of his game.

From the very first moments of the fight, you can see that Samart's entire game revolves around distance control. Since he was an excellent boxer, an area most nakmuay are lacking in, he would use his teep from the beginning of every round to thwart his opponent's attempts to close range.

Every attempt to step in with a punch is met with a quick, hard teep to the midsection or hips. This also keeps the opponent from trying to use their own kicks to close the distance. Even though it would be easier for Samart's opponent to reach him with a kick, he would be in extreme danger of being shoved to the ground were he to try any technique that put him on just one leg.

Provided you are capable of teeping well enough to prevent an opponent from closing the distance on their terms, they have only two responses. First, they can try to reach you anyway, which means they will start to overextend themselves, or throw telegraphed techniques.

Samart's opponent, after being hit with two more teeps, attempts to strike with a sloppy, lunging left hook, which Samart easily avoids. After that fails, he logically resorts to throwing his own teep, it being the longest strike he has. Unfortunately for him, Samart follows the same line of logic, and easily catches the expected kick before dumping his opponent to the ground.

The second response an opponent can have to being kept outside of range, is simply to stay at the end of your teep, and attempt to time and counter it. Like Samart in the last .gif, an opponent may hope to catch your leg and sweep you. Or they may hope to avoid your teep and land something more meaningful as a counter. This is when the teep functions exactly as a jab, in that it works perfectly to set up other techniques. This is a huge part of the game of the greatest active nakmuay, Saenchai PKSaenchaimuaythaigym (whose gym-based last name seems to change at least three times a year). Saenchai is fond of feinting the lead teep and throwing a hard left round kick after it or, sometimes, a more powerful rear leg teep:

Sam-A Kaiyanghadaogym, one of the most technical nakmuay, excels at using his teep to both control distance and set up strikes. Watch him land several well-time teeps that take his opponent off his feet, then fake his lead teep in order to bait a hesitated reaction from his opponent and land a powerful round kick to the ribs.

Many of these strikes utilize a technique called simply the "hop," in which you fake the teep by lifting the knee, and hop your rear foot forward to close the distance. This allows to control whether or not you use the teep to keep the opponent at bay, or to enter into striking range yourself.

Unfortunately, the teep is not commonly seen in MMA. It is often said that the technique is easy to catch, and may therefore result in an unwanted takedown. I disagree. In fact the teep, being a linear kick, is much quicker and harder to see coming than a round kick, and round kicks are very commonly thrown in MMA. If an opponent tries to catch a teep, they open themselves to such techniques as the superman punch, or if they do manage to catch the kick, the teep serves as its own defense. A caught foot cannot be used to damage per se, but it can certainly still be used to push.

Though this video pertains to a caught round kick, the same techniques can be used to counter a teep catch. When the opponent has a hold of your foot, you can push him away using the same foot.

Hopefully this is enough to convince you that, even in MMA, the teep is an invaluable weapon. Whether you like to box or throw punishing kicks, the teep is the perfect weapon to set those strikes up. And nothing opens an opponent up for counters like being frustrated time and time again by a stiff kick to the guts every time they try to reach you. So I'll leave you with a video of Saenchai. Observe, enjoy, and practice your teeps!