The Lloyd Irvin saga has taken many odd twists and turns since two of his students were accused of raping a female student this past New Year's Eve. Interest in that case turned up a 1989 gang rape case in which Irvin was chargedalong with several others only to get off on what local newspapers claimed to be a defense of impotence while admitting he wanted to participate in what he claimed was consensual sex with a "freak."

Irvin claimed to terminate his affiliate program, though at World's, Crazy 88 gym was suddenly representing Team Lloyd Irvin once again, lending at least some credibility to those who claimed the affiliate program was never actually terminated.

In addition to the exodus of students and affiliate gyms, Irvin had embarked on a campaign of purchasing URL's related to the terms Lloyd Irvin and Rape. That move shed some light on Irvin's place in "Scamworld" culture and affiliation with other scammers such as Irvin's mentor, Dan Kennedy.

Other issues from the past also were drudged up as Irvin standout D.J. Jackson's 2008 sexual abuse charges came to light before Pan Ams.

Also, an issue in 2011 where Irvin was the defendant in a case where the United States government was successful in getting a $287,148.68 tax lien against Lloyd and Vickie Irvin.

While a close to $300,000 tax lien is bad, things appear to have gotten much worse for Lloyd as case number FL13-0958 in Prince George County Circuit Court -- also known as USA vs. Irvin -- was filed and judgement handed down this Monday. This time, the United States government got a lien of $1,021,440.68 against Lloyd and Vickie.

That's quite a hefty sum to add to the previous lien considering that Lloyd is still advocating being a "MMA Millionaire" and hosting seminars for "real player lifestyles." 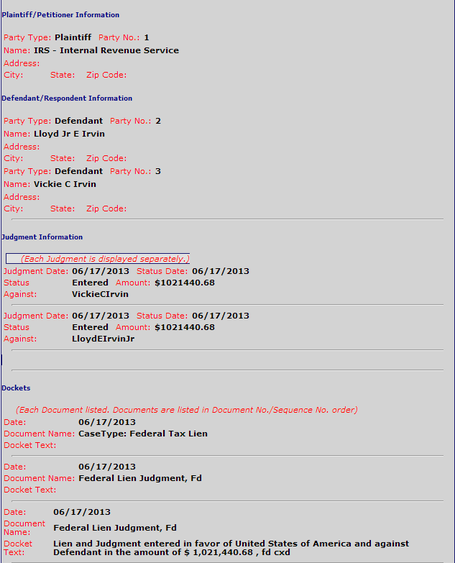