Vaunted keyboard warrior Dallas Winston lends his take on the key factors presiding over the Rashad Evans vs. Dan Henderson fight in the main event of tonight's UFC 161 show.

The namesake of UFC 161 is a compelling battle between former light-heavyweight champions Rashad Evans and Dan Henderson. The 5-fight pay-per-view from the MTS Centre in Winnipeg begins at 10:00 p.m. ET, picking up where the preliminary cards on the FX Channel (8:00 p.m. ET start time) and Facebook (est. 7:00 p.m. ET start time) leave off.

33-year-old "Suga" Rashad Evans (17-3) is among the short list of reality show contestants who not only became "the next Ultimate Fighter!" but progressed onward to the prestigious title of UFC champion. Rashad debuted on TUF 2 as a fairly inexperienced (5-0) and unknown fighter, competing as a drastically undersized heavyweight. However, what Evans lacked in height and girth was more than balanced by his unparalleled quickness and agility as compared to the other larger, lumbering heavyweights, and his Division 1 wrestling background kept him from being bullied around in the few instances in which his beefier counterparts were able to get their paws on him.

In retrospect, the way the green mixed martial artist dramatically improved in such a short span of time was a harbinger of Rashad's future success. His untapped potential might've been clouded by the competitiveness of his first three Octagon outings, the first being a split decision over Brad Imes to snare the TUF 2 crown as a heavyweight, the latter two, which transpired back at his natural fighting weight of 205-pounds, were decisions over Sam Hoger (split) and inaugural TUF runner-up Stephan Bonnar (majority).

At the time, the MMA sewing circle was already grumbling about Evans' purported inability to finish fights (every TUF and UFC win had been via decision) and his little spat with opposing TUF coach Matt Hughes, who criticized Rashad for showboating. As if on cue, Evans notched highlight-reel-worthy stoppages in his next two turns: a crushing TKO by way of mounted punches over Jason Lambert and a devastating high kick that sent Sean Salmon's cranium into orbit. Evans would go on to unseat TUF predecessor Forrest Griffin to assume the light-heavyweight throne and, though his title run was ephemeral, Evans has been a staple in the top-5 rankings ever since.

Respected legend Dan Henderson (29-9) would need a half-dozen waists to accommodate the plethora of championship belts he's accrued throughout his MMA career, and there are phone books thinner than his overall list of accomplishments as an athlete. For reference, the following is a screen shot portraying most of (as many as I could fit) Henderson's past honors from his Wiki page. 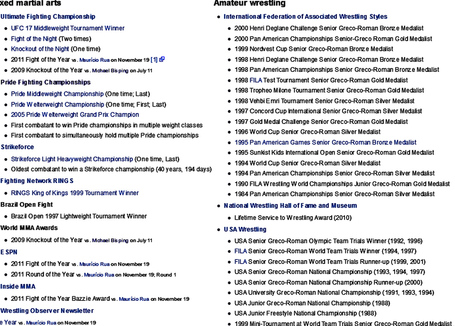 So he's done one or two noteworthy things in his life.

Of course, the downside to his mile-long rap sheet, 16-year tenure in MMA and being forced to rent garage space to fit all his medals, belts and trophies is age and wear. At the ripe ol' age of 42, Hendo hasn't slowed down noticeably yet, but a confrontation with Father Time and all of his debilitating afflictions is ultimately inevitable.

Since both fighters have a wrestling background that may be pivotal in tonight's match up, allow me to reference the fine efforts of Bloody Elbow's Mike Riordan, who's treated us to his "Factgrinder" series with the intention of impressing the true value of a wrestler's past achievements.

Dan Henderson, domestically, was the dominant Greco-Roman wrestler of his generation at his weight. On the international level, he showed great potential and had flashes of brilliance, but was never able to put it all together and bring home a world-level medal.

Remember, however, that his Greco-Roman skills vastly outstrip his ability in other styles, so nobody should be surprised when he appears human in a wrestling situation non-native to Greco.

Rashad finished his NCAA Division 1 career in the round of 12 in the NCAA tournament, and this serves as a just representation of his skill level. While never one of wrestling's true elites, Rashad was pretty darned good, and not too terribly far away from greatness.

Let's move on to their in-cage skills and tendencies, which is really of the most importance here.

Hendo's "H-bomb" of a right hand accounts for the vast majority of his known weaponry, but is widely feared across the galaxy, and for good reason. Like Rashad, Henderson was anointed with the less than desirable moniker "Decision Dan" early on in his career for his propensity to control and neutralize foes with his wrestling, and he's complemented that foundation with striking as Rashad has, but by different means.

Whereas Evans has forged himself into a fairly refined boxer with strong capabilities across the board (footwork, balance, head movement, defense, stance, etc.) and the ability to seamlessly blend his wrestling and striking together, Hendo has typically opted to use his wrestling in reverse in order to stay on his feet and behead opponents with the infamous H-bomb. Though he does have the ability to pull the curtains with legit combos (as he did against Wanderlei Silva in Pride) or abridge the H-bomb into a short-range jackhammer (see: Fedor Emelianenko), Henderson has successfully defied MMA's proven theory of maximum diversity by allowing his fate to be decided almost entirely by the efficacy of his home-run overhand right.

The advantage of Hendo's outlook lies in the all-powerful "whatever works" sentiment, as the proof is in the proverbial pudding, but the timeless concerns surrounding a nearly one-dimensional knockout artist still remain. For starters, it's easier to game-plan for opponents with one weapon (or limited weaponry) than those with many: whereas Henderson has to be concerned with Rashad's quickness, cage motion and the dual threat of his wrestle-boxing, Rashad basically has to make sure he doesn't introduce his chin to Hendo's fist. Secondly, takedowns are the best way to disrupt a monstrous power puncher: in order to heave fight-ending punches, the thrower's feet must be firmly planted to the floor, their hips are committed to rotational torque to generate said power, and their body position is similar to that of a pitcher throwing heaters across the plate.

Conversely, that body position makes it somewhere between difficult and impossible to repel a takedown. The ideal stance and means to avoid or defend a takedown is almost the exact opposite: the defender should be light on the toes for adequate movement, able to match their opponents angle and level, and have their hands/arms available to dig in underhooks, control the head and/or deflect potential strikes if their adversary is wisely using the takedown as a decoy.

Additionally, Riordan's closing statement in the summary for Henderson is worth revisiting: "Remember, however, that his Greco-Roman skills vastly outstrip his ability in other styles, so nobody should be surprised when he appears human in a wrestling situation non-native to Greco." In layman's terms, Greco-Roman wrestling caters strictly to the upper body and attacks below the waist are prohibited.

That theme holds true for Hendo's MMA wrestling as well, as he's been a beast in entanglements with the likes of strong light-heavyweights like Quinton Jackson and even heavyweights like Antonio Rodrigo Nogueira and the aforementioned Emelianenko. His familiarity with standing more upright is also a big reason he's able to conjure up such exorbitant velocity for his punches. However, against the short list of more traditional wrestlers he's faced whom are adept at quickly sinking their levels way down to the floor while shooting in (Jake Shields is the prototypical example while Kazuo Misaki, though not necessarily a "traditional wrestler," also deserves mention), it's no coincidence that we've seen Henderson struggle.

Rashad fits firmly into the latter mold. He's quite capable with takedowns in the clinch but one of the best in the division at exploding for lower-level singles and doubles from a distance. Those attributes, along with how well Rashad fuses his striking and wrestling together, should present some problems for Henderson. Not only should Rashad use those intertwined skills to take some heat off the H-bomb, but Henderson is not a huge threat off his back either.

I expect Henderson to be a handful for Rashad to move around in upper-body clinch encounters, but to have a solid advantage with his low-level takedowns, especially if he lures Henderson into fiery striking exchanges beforehand. Hendo is feisty as hell in every aspect of MMA and, regardless of how predictable or basic it may seem, has a great chance of pulling Rashad's plug with a single punch. It'd be crazy to overlook that possibility considering Henderson's legacy and lengthy body count.

My Prediction: Rashad Evans by decision.