One of the best Sambists of all time, Igor Kurinnoy is a scholar-warrior; winning renown as an athlete, a coach, and an academic.

Share All sharing options for: Gods of War: Igor Kurinnoy

Igor Kurinnoy was born in the Zhitomir region the Ukraine on March 22, 1972. At this time, the Ukraine was part of the Soviet Union, a collection of states under the direction of Russia. When Igor was around the age of three, his family moved to Smolensk, a city in Western Russia.

Kurinnoy spent much of his childhood in Smolensk, and there he first began practicing martial arts at the Urozhai Sports Club under a Merited Coach of Russia, Ivan Andrusov.. Kurinnoy learned Judo and Sambo, a Russian art that is a combination of Judo and local wrestling traditions, at Urozhai. He began competing at a young age and in 1983 at age 11, Kurinnoy placed 5th at the regional championships in Judo. 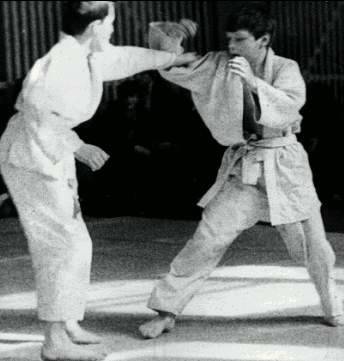 In 1984, his family again moved, this time to Moscow. Kurinnoy began training at the Central Sports Army Club, the center for many of the U.S.S.R.'s top athletes. Kurinnoy trained there for a year and then was admitted to Sambo 70, a boarding school that focuses on intensive Sambo training in addition to academics.

For the next six years, Kurinnoy's focus would be Sambo. He would win the 1987 Russian Schoolchildren Spartakiade, a national event, and place second at a USSR Spartakiade. Those performances earned him the title of "Candidate to U.S.S.R. Master of Sports," which basically equates to being a nationally ranked competitor. In 1988, Kurinnoy traveled to Kstovo for the All USSR Youth Games and took 2nd. Then 1989, his last year at Sambo 70, Kurinnoy again traveled to All USSR Youth Games. In the semi-finals, Kurinnoy found himself trailing on points, but as the seconds ticked down Kurinnoy managed to snatch a leglock to win with just three seconds left on the clock. 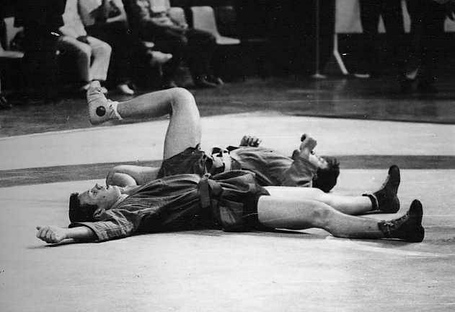 A teenage Igor Kurinnoy lays exhausted after a last second win the semi-finals at the 1989 All U.S.S.R. Youth Games

Kurinnoy would win the finals earning gold and the title of "U.S.S.R. Master if Sports". Kurinnoy went from the Sambo 70 secondary school to the Military Engineering Academy and collected two more silver medals from the Youth Championships.

In 1991, at the age of 19, Kurinnoy won his first senior World Championship and was given the title "U.S.S.R. Master of Sports International Class" a rank reserved for world champions. Then in his last year of eligibility Kurinnoy also won the Russian and European Youth Championships in Sambo.

In 1994, the young engineering student won the Sambo World Cup both as an individual and as part of the Russian national team and then won his second World Championship. That year he was listed as on of the Top 10 Athletes of the U.S.S.R. and was awarded the title of "Merited Master of Sports of Russia", the highest honor in the rather verbose Soviet athlete ranking system. He was also named 1994's "Mr. Sambo" by one of the major Russian sports magazines.

In 1995, Kurinnoy graduated from the Military Engineering Academy and became an engineer in the Russian space program. Kurinnoy would reach the rank of Captain in the Russian military and receive many commendations for excellence both in athletics and in his service to the program. He headed a project to create an electronic encyclopedia and later had several multimedia publications including Sambo for Professionals.

During this time in the military Kurinnoy kept training and competing. In 1996 and 1998 Kurinnoy won Sambo World Cups. In '96, he also won the Hand-to-Hand Championship of the space program. He also began competing in Judo again, winning gold at the Goodwill Games in 1993 and back-to-back Moscow Championships in '96 and '97.

In the 1990's, Kurinnoy also began training Sumo wrestling, and in 1998, he won the Championship of Russia. He would go on to win several Russian and European championships in Sumo. Kurinnoy was a key factor in organizing and spreading the sport of Sumo in Russia. Kurinnoy credits Sumo with helping him develop both his physical skills and sharpening his mental approach to competition. 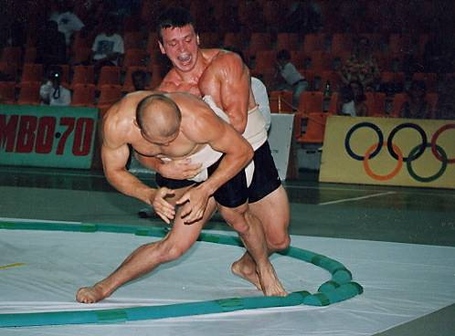 Igor Kurinnoy attempting a throw in a Sumo match

Then in 1999 Kurinnoy began construction on what would be his proudest achievement. In March of 2000, his new academy, Boretz, opened their doors. Kurinnoy immediately gained a reputation as an outstanding coach, with somewhat unusual training methods. It has grown to become one of the largest gyms in Russia, producing many top competitors, and was featured on the History Channel's Human Weapon Sambo Episode.

Kurinnoy served as an athlete-coach at his school, both training students and preparing himself for competition. He won his third Sambo World Championship in 2001 and won World Cups in 2001 and 2002. He continued to compete through the mid and late 2000's in Sambo, Judo and Sumo, but slowly his focus shifted more towards coaching.

Kurinnoy's accolades are numerous in both athletics and academics: Merited Master of Sports of Russia, Merited Coach, Order For the Services to the Country (Second Class), the Order of Peter the Great (Second Class), the Laureate of Mikhail Lomonosov Premium in the field of Science and Education, Professor of the Military Science, and a member of the Russian Sumo Federation Presidium to name a few.

A scholar, an athlete, and above all a competitor, Igor Kurinnoy is a very worthy addition to our Pantheon of modern day Gods of War.

All pictures from Igor Kurinnoy's online photo gallery. Special thanks to Mr. Kurinnoy for his help with this article and a big thank you Stephen Koepfer, President of the American Sambo Association and head of the Legalize MMA in New York movement, for putting me in contact with Mr. Kurinnoy.

Stephen Koepfer is actually in Russia right now training with Kurinnoy so check his Twitter out for some great videos and pictures of training.

For more on the great martial artists of recent history visit the T.P. Grant's Gods of War stream. To share thoughts go to the comment line below, or go to T.P.'s Twitter or Facebook pages.