Dana White announced Forrest Griffin's retirement at the UFC 160 post-fight press conference. In a post fight interview with Ariel Helwani of MMAFighting.com, Forrest revealed some specifics about the knee injury, and mentioned that he was not at 100% even before the knee injury.

Griffin has a history of recurring shoulder problems. In 2010, he pulled out of his scheduled bout at UFC 114 fight with Antonio Rogerio Nogueria due to shoulder surgery to fix a nagging injury. In fact, Griffin told Helwani that he has had surgery on the shoulder three times. He was again dealing with a shoulder problem while training for his December 2012 UFC 155 bout with Phil Davis that had him operating at "75, 70, 60 percent maybe." He then injured his knee, and had surgery for "patella reconstruction, ACL, MCL and meniscus." Here is a post-operative picture of the knee. 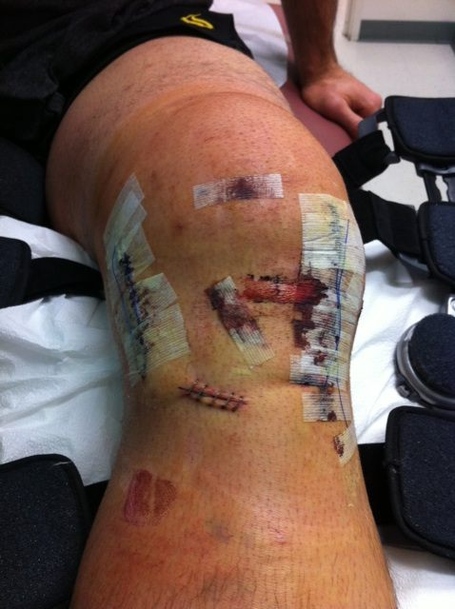 This was obviously a devastating knee injury. Forrest mentioned a patella reconstruction, and I'm not sure what he meant by that. It could be a repair of a patella fracture, or repair of a patella tendon tear. In March, Forrest Tweeted that his doctor told him he would be "able to go" in about seven months. At this point, it really doesn't matter. The knee and shoulder injuries, combined with the wear and tear of 16 years of training, have unceremoniously escorted Mr. Griffin from the Octagon.

On a personal note, I owe tremendous gratitude to Forrest Griffin. His classic fight with Stephan Bonnar in 2005 was a watershed moment for me as an MMA fan. As Kid Nate noted, Forrest was "The man who was one half of the fight that made the UFC a household word."

Oh, one more thing. In his interview with Ariel Helwani, Forrest also makes casual mention of another injury that he suffered after the knee injury- his penis fell off.