Kim Couture and Elaina Maxwell add their names to the list of fighters accusing Brett Atchley of misconduct. Atchley continues to deny the charges but messages appear to show his plans to hurt a fighter financially.

With Tuesday's article featuring several prominant members of the women's MMA community alleging misconduct by manager Brett Atchley, more people have come forward telling their own stories. Kim Couture told Bloody Elbow that she had to send a cease and desist letter after she attempted to help out a young fighter who allegedly was sexually assaulted by Atchley.

"The reason I got involved was because there was another Invicta fighter...who doesn't want to be named yet, she hasn't come forward. She was very, very young. I didn't even know her," Couture told Bloody Elbow.

"I met her for the first time, I met her, she told me all about it. There was sexual assault, then there was threats that if she didn't...if she told anybody he would get her dropped from Invicta and blackballed in the sport. In text messages! Like a moron! Threatening her. I told her she needed to go to her parents, go to her lawyer and go to Shannon Knapp. I connected those two and that was all I had to do with it.

"The e-mails to him were calling him a 'scumbag' and a 'piece of shit' and he was gonna fuck him up and it was going down. It was the craziest stuff I've ever seen in my life" -Kim Couture

"And then Brett started attacking me. he went on an internet blast, a Facebook blast. Trashing me as much as he could. And he teamed up with another, I guess, former enemy of mine." Couture went on to explain that it was the same girl who had her arrested for assault two years ago, a charge that was later dropped. "She had joined forces with Brett to do a smear campaign on me. At that point I realized I had to get my lawyer involved again. Because I knew her and how she was. The threats continued from him so the lawyer sent a cease and desist and the threats started going toward my lawyer. The e-mails to him were calling him a 'scumbag' and a 'piece of shit' and he was gonna fuck him up and it was going down. it was just the craziest stuff I've ever seen in my life. That's how much I got involved, but another $2,000 because I keep having to spend money on lawyers to protect myself."

Bloody Elbow again reached out to Atchley and offered a chance to sit down and discuss the situation. Atchley responded with an e-mailed statement. I have redacted the name of the alleged victim of sexual assault as is standard victim protection journalistic practice.

Here is the statement, unedited:

There are those in numbers advising me not to comment on anything, the allegations by Sarah Maloy are complete lies and fabrication! The last time remember seeing Sarah Maloy was that we were talking about a potential fight vs Kathina Catron and yes, we were both in a public place in a hotel bar. My question is: where the hell is the person that started this windfall and momentum and attack? (NAME REDACTED)? That is what started this! I apologize profusely to Alyssa Vasquez and all of the other female athletes affected by these circumstances but when you start slinging sexual impropriety about me then a line has been crossed and your affecting my family. I have a four year old daughter and if this affects my relationship with her and my quality of time, I will make sure that protected at any cost.. The test of what has been grossly exaggerated and removed from its true context is very disappointing..I have NEVER and I say again NEVER stolen one dime from any of my clients.. If someone shoved my mother as its been said that I did, I would not hesitate to inflict some serious bodily harm. Tara LaRosa claims me accosting her. If there were others around why was it not brought up before now? Something of that nature would surely have been newsworthy,don't you think? I do I'm fact have legal counsel and we will address this in the state of New York

When asked if there were pending charges in the situation with that young fighter, Brett responded "Ya, nobody can find her though.. She won't talk or her current management."

He then forwarded Facebook messages from a woman claiming she was with the fighter making the allegations that night and nothing happened while also referring to the woman as "a little bitch." The message read:

Oh good, I seriously can't wait to get this all handled! So many big plans and I miss training sooo much . What!!! Wow! Thats extreme!! I'm pretty sure I was with her the entire weekend in KC and you were never once sexually inappropriate! wow what a little bitch!

When reaching out to verify the message, I was informed that the person in question (Taylor) was friends with the fighter alleging sexual assault, but that they were fighting at the time when that message was sent.

She then sent the other part of the conversation that Atchley excluded which contained Brett calling the fighter -- whose name I've again removed -- "an idiot" and saying he would "fuck her over financially with Invicta," to shed more light on the context of the conversation: 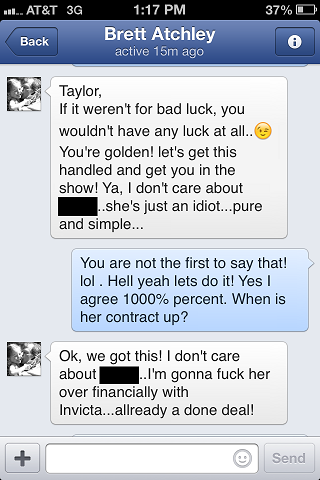 As previously mentioned here on Bloody Elbow Sarah Maloy had posted Tuesday's article on her Facebook along with this message -- which Brett referred to in the above statement:

I was very torn about posting this article...I don't want to bring any negative attention to our sport, but at the same time, what is happening is NOT ok! I was unfortunate enough to have my own encounter with this man at an Invicta event. I am a strong woman n rebuked his physical advances as forcefully as he made them. I was also told that he was the only way to get an Invicta contract or even another fight with them for that matter. He even implied that he would get me a contract without hiring him as a manager under inappropriate circumstances. I admit he got n my head a little...I mean I wasn't able to get an MMA fight for a while n did a couple boxing matches. Of course I came to my senses, but just n case there is anyone else out there that is struggling n a situation like this, please feel like u can talk about it! There is such a strong community of WMMA peeps that will support u 100%!

Elaina Maxwell was another fighter who took to social media to express her interest in offering her experiences being managed by Atchley:

@bloodyelbow WOULD LOVE TO ADD A STATEMENT! :)

While she said that she never suffered any physical harassment, Maxwell did have issues with what she felt was Atchley's failure to do his job and not paying her any sponsorship money.

"He bullied me into paying management fees and made it sound like I wasn't going to be picked up by RFA again. He was bullying me for the management fees before the check had even cleared," Maxwell said. "He made it seem like my last performance at RFA was so horrible that he couldn't get me a fight because my performance was so bad. And I was completely shocked by that because a win is a win. And my last fight wasn't my best performance but you don't need to get hung up on that."

Maxwell also made it clear that she felt like he was rarely, if ever, around to give attention to her.

"I'm gonna fuck her over financially with Invicta" -Brett Atchley

"I would have to contact him and say 'When is this? What about this? What happened to this?' He promised me seminars and all these other ways to make money and he never followed through with any of them."

When asked if she believed that he was selling the sponsorships but not planning to pay her any of the sponsorship money, Maxwell explained 'He never paid me a dime from any of the sponsors. He said VII A.D. they were going to sponsor me and I was giving them shout outs and there were a bunch of other sponsors and I kept plugging their websites and their products. And I never got anything in return. I'm sitting there doing my job as a fighter and promoting sponsors and I never got anything in return. It's just another reason why I have to talk to sponsors myself or I just don't trust the situation. It's just a shame that Brett had to be one of those scumbags. You know?"

Bloody Elbow also spoke to Tara LaRosa to follow up on both Atchley's above statement as well as a quote in MMA Junkie where Brett said "Tara needs to retract what she said. It's never going to happen, but I'll make it happen one way or the other. If I have to get legal recourse, then so be it."

LaRosa's response was quite simple.