UFC 160 Judo Chop: The Best and Worst of Mark Hunt

Connor Ruebusch breaks down the devastating power that is the striking technique of the Super Samoan, Mark Hunt, now just two days away from his UFC 160 fight with Junior Dos Santos.

Share All sharing options for: UFC 160 Judo Chop: The Best and Worst of Mark Hunt

It's just two days away now. The greatest--and I say this with no ounce of hyperbole or exaggeration whatsoever--the greatest contest in mixed martial arts history takes place on Saturday, the 25th of May, a day that shall go down in history as the day that changed the way we think about combat sports... forever.

Okay, so maybe I am exaggerating just a tiny bit. But I want you to get a sense for how excited I am. In two short days The Super Samoan Mark Hunt will face ex-UFC heavyweight champion Junior Dos Santos in a matchup that, a mere two months ago, would have seemed an utter impossibility. But it is happening, folks. In one of the sports most spectacular career comebacks, Mark Hunt has made the unlikely climb from complete obscurity to possible title contention. He's made that climb with ever-improving grappling skills, but most importantly, some of the best striking the heavyweight division has ever seen.

Note: Just like yesterday's article, I'm not going to look at Mark's attributes, but rather his striking technique. Chins, speed, and knockout power are easy to talk about, and pertinent to the fight at hand, but ultimately not very interesting. Technical analysis is more challenging, but far more rewarding as well.

Yesterday I broke down the striking of Junior Dos Santos, explaining the best and worst aspects of his style. Now we're going to show BE's favorite son the same treatment, examining the absolute best part of his game, the skill most likely to get him the win against JDS; and the worst, the hole Junior is most likely to exploit.

For my Dos Santos breakdown, you can follow this link.

And please follow this one for Fraser Coffeen's take on the defensive technique of Mark Hunt.

Now let's get into it. 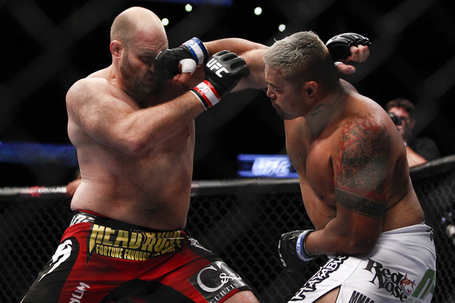 Mark Hunt began his kickboxing career way back in 1999 as little more than a brawler with impressive power, a granite chin, and a natural ability to fight. By the time he won the K-1 World Grand Prix, just two years after his professional debut, he had already made massive strides as an increasingly technical fighter. Though his trademark aggression would still rear its head from time to time (and still does) Mark had begun his transformation into the patient, stalking, offensive counter puncher we know and love today.

And his skills continue to improve as he makes his way to the top of the UFC heavyweight division. One of Hunt's prettiest counters was the check hook (Cheick hook?) he used to knock down Cheick Kongo at UFC 144. 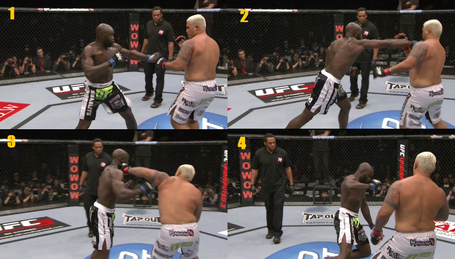 1. Kongo, after faking a switch, steps into a straight right.

2. Hunto moves backward, but not in a straight line. After a few steps back, he begins to pivot to his left, taking the inside angle on Cheick as he overextends on his punch. The right connects, but Hunt rolls with it. It's only a glancing blow .

3. Continuing his pivot, Hunt throws a left hook that catches Kongo off-balance and out of position.This particular counter lead hook is known in boxing as a check hook, and was famously used by Floyd Mayweather to knock out the charging Ricky Hatton.

4. Cheick busts a few moves as he tumbles to the ground.

Though it does not resemble most people's idea of slick counter punching, Mark has always exhibited this willingness to eat a punch or two to land a crushing shot of his own. The important thing is that, by virtue of his good posture and defensive awareness, Hunt almost never gets hit with a shot that he doesn't see coming. And when he does see a shot coming, and figures it's worth the risk, he'll happily take a punch to land a devastating counter over the top, as against Kongo above. Here he is doing the same thing without the pivot to knock out Stefan Leko (back when that name really meant something).

As time goes on, it's becoming more and more clear that this left hook is Hunt's money punch. Though he was quite right hand-heavy in his earlier days, and still throws plenty of punches off the back hand, it is his left hook which has done the most damage to recent opponents. Being almost always at a height and reach disadvantage, Mark Hunt doesn't have much use for short, tight left hooks. Rather, he throws mid- to long-range hooks, often in conjunction with a little leap forward to cover distance. Notice, in the images above, how he throws the hook with a horizontal fist. Many fighters throw slapping, vertical-fisted hooks at long range that connect with the fingers rather than the big knuckles. Hunt, on the other hand, almost always throws his left with a horizontal fist, so that the only part of his hand that makes contact with the opponent's head is the top of the first knuckle. Thrown by Hunto, this would be equivalent to being struck in the side of the head by a ball-peen hammer. Bearing that in mind, it is easy to see how a single left hook from Mark Hunt was able to split Stefan Struve's jaw like a Saltine.

One of the biggest advantages that Hunt holds over JDS is his ability to fight while moving backwards. In yesterday's Judo Chop I detailed Junior's troubling tendency to stand bolt upright and back straight up when threatened. As a result, Junior is not only more susceptible to being hurt by punches, but unable to land any meaningful punches of his own. Hunt, on the other hand, is very fond of backing up and creating false openings specifically to catch his overzealous opponents coming in.

It's the left hook that gets all the recognition, but the punch that began Hunt's knockout of Stefan Struve was really a looping right hand. Hunt utilized some very sneaky footwork to set up the punch. 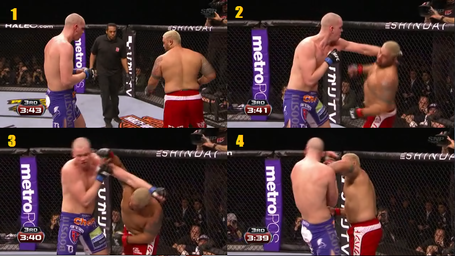 1. Struve has just landed a couple of punches, and Hunt retreats. He simultaneously commits two of boxing's cardinal sins, not only turning his back, but crossing his feet as he walks away from Struve.

2. Even a cumbersome striker like Struve knows that a turned back and crossed feet are open invitations to punch the opponent, so he throws a jab at Hunt. Unfortunately for Struve, Hunt sees it coming. In fact, he was hoping for it, and he pivots, slipping the jab and...

4. And a love tap of a left hook to finish it off. Granted, this is Hunt we're talking about, so it was probably a lot like being love tapped by, again, a ball-peen hammer.

This little maneuver is actually an established bit of footwork trickery that was favored by one of history's greatest boxers, Jersey Joe Walcott. Walcott called it "the Cakewalk," and you can see him cross his feet trying to bait his opponents constantly throughout this highlight.

In fact, at 1:57 Walcott uses the cakewalk in almost the exact same way as Mark Hunt, baiting his opponent with his crossed legs and slipping into stance at the last possible moment to knock his man down with a thunderous right hand.

Finally, though it's not counter-fighting, per se, I can't resist posting this .gif showing Hunt's very underrated leg kicks in action against Mike Bernardo, a taller-than-Hunt kickboxer renowned for his power and boxing ability but quite susceptible to a sustained leg kicking attack (sound familiar?). Hunt has legs like telephone poles, and he is quite adept at smashing them into the thighs of his opponents. Behold:

Hunt and Dos Santos are both skilled strikers. Junior isn't much of a counter-puncher, but is very dangerous on the aggressive. Mark Hunt is able to both counter-fight and attack, but he has shown a tendency in the past to get a little too aggressive at times. Serious Hunt fans, you might want to look away, because you know what .gif is coming.

Hunt charges like a bull at the significantly smaller Manhoef. He lunges forward chin first, feet out of position, and runs straight into a right hand that may as well have been a brick wall. Hunt was probably hoping to overwhelm Manhoef and pin him against the ropes, where he could work him over with hard knees to the body. This was a favorite attack of Hunt's in his K-1 days. But Hunt approaches a heavy-handed striker like Manhoef all wrong, and goes as limp as a corpse because of it.

True, Hunt hasn't shown this kind of reckless striking since being finished by Manhoef, and the fact that he is now training consistently and putting in work in the gym is likely the reason for his newfound discipline. But his willingness to dive into the guards of Sean McCorkle and Stefan Struve shows that the old aggressive streak is still there. Against a fighter as tough to finish as Junior Dos Santos, pouncing with a flurry of punches may not be the best approach. That works against the Cheick Kongo's of the world. It almost certainly won't be as effective against JDS.

So, there you have it. This matchup is insanely intriguing. In my opinion, Junior is the most beatable top five opponent for Mark Hunt. But Junior certainly has other plans, and he has the talent to derail the Samoan's hype train in gruesome fashion. Technique aside, both men have a tendency to gas, as heavyweights do. Both men, however, are still dangerous long after the tank is empty. Both men pack dynamite in their fists and steel in their chins, and both men are more than willing to go to war with any given opponent, on any given day. As fight fans, we should all feel blessed to be able to witness this fight.

So, what's my pick? I think that JDS is more than capable of winning, and stands a good chance of taking a decision over the Super Samoan. But I don't know how I can't root for Mark Hunt on this one. His story is too compelling, and he's far too dangerous an underdog to ever count out. I don't have it in my heart to pick against a man with Hunt's remarkable story. At 39 years old, with an MMA record of 9-7, Mark Hunt is poised to challenge for the UFC heavyweight strap. We shouldn't be that surprised, though. After all, Mark Hunt has always been ready for a fight. Mark Hunt was born down.