Connor Ruebusch breaks down the striking technique of Junior Dos Santos as he prepares to face Mark Hunt at UFC 160 in the matchup Bloody Elbow readers around the world have been waiting for.

Share All sharing options for: UFC 160 Judo Chop: The Best and Worst of Junior Dos Santos

Well, Bloody Elbow readers, it's almost time. The Visa has been granted, the planes have landed, and the jet lag is beginning to wear off. And now we lucky, lucky fight fans have only three days until Mark Hunt and Junior Dos Santos clash at UFC 160. Though the card is headed by a heavyweight title bout, we all know that Hunt vs. JDS is the real main event, and it's a fight that I have been looking forward to for weeks. Sure to be a striking throwdown the likes of which the UFC's heavyweight division has never seen, this matchup pairs two men legendary for their iron chins, quick hands, and knockout power.

So let's break 'em down. The title says it all. Like I did with Vitor Belfort (Best & Worst of Vitor) and Luke Rockhold (Best & Worst of Luke) last week, I will be assessing the best aspect of each combatant's game, and then the worst aspect. For our purposes, "best" shall be defined as the aspect most likely to bring them success against their opponent, and "worst" the aspect most likely to relieve them of a few moments of consciousness and a couple dozen brain cells.

Note: This is a technical breakdown. As such, I'm going to avoid bringing attributes into this unless they directly pertain to the techniques in question. Saying that such and such has better speed, a better chin, or better power is certainly relevant, but it doesn't make for very good reading, and talent is never as impressive as skill.

Tomorrow I'll be breaking down the inimitable Mark Hunt, but today we're looking at Junior Dos Santos. The Brazilian ex-heavyweight champ has a famously boxing-centric attack that has left eleven bodies on the canvas at his feet in his short seventeen fight career. Winner of three Knockout of the Night bonuses, Cigano's sprawl and brawl is a true throwback to the early days of MMA, when men like Chuck Liddell, Wanderlei Silva, Rampage Jackson, and Mirko Cro Cop were showing the mixed martial artists of the world just how much they had yet to learn about striking. Junior Dos Santos is the product of those hard-learned lessons. He's not a perfect boxer, but it's hard to deny that the sport has come a long way since the days when Tim Sylvia was able to stymie the "boxing" of Andrei Arlovski with a simple jab. 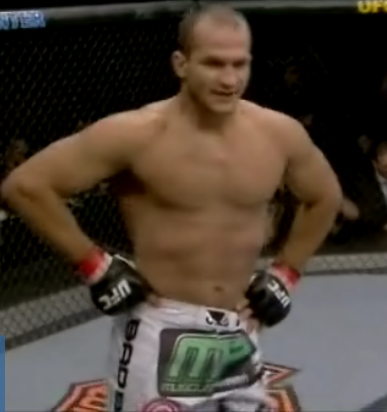 The Best: The Jab

This one punch is something of a legend in boxing. It has been called for by commentators, coaches both good and bad, and fight fans the world over for decades now. If you learned everything you knew about boxing from the average boxing fan, you would know two things: "hands up" and "jab, jab, jab."

Unfortunately, fighting isn't that simple. Fighters sometimes feel that they have to establish a jab at the cost of all else, get quickly timed by their opponents, and dropped with a counter punch. Even Junior Dos Santos' own corner had little in the way of technical advice to offer him during his recent tough loss to Cain Velasquez. If the translated Portuguese is to be believed, "jab, jab, jab" is about all they had to say to the heavyweight champ, even just before the final frame, despite the fact that it hadn't worked for four rounds so far. The jab is a crucial tool in boxing, kick-fighting, and mixed martial arts, but its purpose has to be understood.

So then, what is the purpose of the jab? First, and most obviously, the punch is meant to hurt the opponent. Second, it helps to find the range. Third, it helps to control the distance. All of these factors, though, are supplemental to the real purpose of the jab, which is to set up more powerful strikes. It is sometimes said in boxing that the jab is the can opener, and the cross (or left hook for some) is the spoon. Fortunately, unless Cain Velasquez has already crushed his will, Junior understands this pretty well.

Though renowned for his knockout power, Junior would be nothing without the weakest punch in his arsenal. Junior has used his quick, piercing jab not only to smash noses and squish guts, but to blind or distract his opponents just long enough to land his devastating cross, his long right uppercut, or his tight left hook. He used the same jab to put away Cain Velasquez in their first meeting. 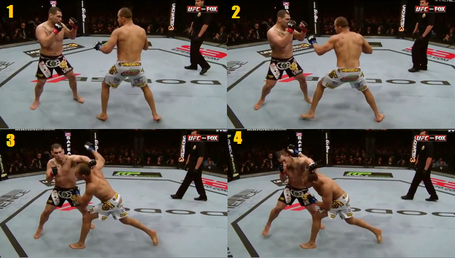 1. Cain is squared to Junior, whose somewhat bladed position is much more viable for both boxing offense and defense.

2. Junior digs into the canvas and begins to launch himself forward.

3. As Junior's jab extends, Cain has a mind to counter it with some kind of half-hearted left hook. Unfortunately, preoccupied with the jab feint, he notices Cigano's looping right hand too late, and on instinct turns his head away, wincing in anticipation.

4. Junior connects with one of the ugliest punches I've ever seen, cracking Cain in the temple with his thumb knuckle. But it's enough, and I guarantee the attractiveness of the punch was the last thing on Cain's mind as he was being pounded senseless by the brick-fisted Brazilian.

Aside from using the jab to blind the opponent, Junior will also use his opponent's expectation of his jab to land more powerful blows. It is rarely a good idea to move or react before a strike is actually thrown, but it's a difficult instinct to overcome. 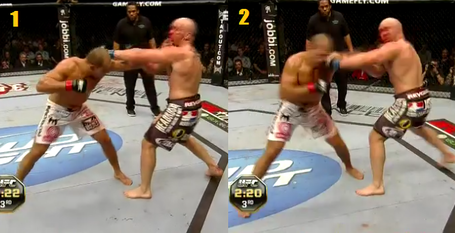 1. Junior, as he has done consistently throughout the fight, lands a stiff jab to the face of Carwin, slipping Carwin's counter jab as he throws.

2. Junior cracks Carwin immediately after with a very blurry left hook that staggers him.

These kinds of set ups work because as demonstrated in GSP vs. Koscheck, the jab is a weapon of attrition. It's not usually going to cause knockouts directly, but being so quick and close to the opponent, it is a relatively easy punch to land. And once it's landed a dozen or more times, you can bet that any bloody-nosed, swollen-eyed human being would start trying to do things to avoid it. Above, you can just see Carwin's right glove swiping at air, trying to parry the punch that never came as Junior's left hook sends him teetering.

That is the power of the jab.

Well, you read the title, and possibly even the opening paragraph, so you knew it wasn't going to be all sunshine and daisies. Hell, you might have even skipped the first half of the article just to get to this point because that's just the kind of sadistic person you are. That's why you watch MMA.

Have no fear, cruel fight fans (or rabid Mark Hunt fans): there is a glaring hole in Junior Dos Santos' striking game, and it's one that the Super Samoan may be tailormade to exploit.

Before we talk about Junior's footwork, let's quickly establish what the term means. Footwork DOES NOT mean quick feet, and yet fighters who are light on their feet are often said to have good footwork. Timothy Bradley is quick on his feet; he does not have good footwork. The real measure of footwork is the use of angles. The best strikers will enter on one angle, strike, and exit on another. His hype may be premature, but Conor McGregor did this masterfully against Marcus Brimage. (GIF) After every significant strike his feet put him at a different angle so that, even while being carpet bombed by Irish fists, Brimage had no clue where McGregor was until after he'd already been hit.

Junior Dos Santos doesn't do this. Well known for his body work, Junior will often lunge in with a jab or right hand to the body, and then pull back in a straight line to his original position. 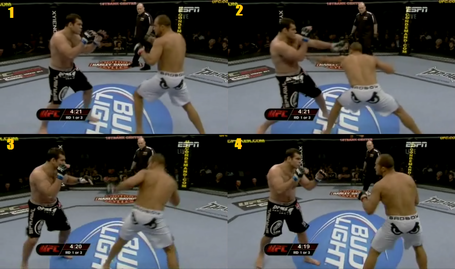 1. Junior stands in front of Gonzaga.

2. Being very fast and explosive for a heavyweight, he has no trouble connecting with his jab to Gonzaga's body.

3. He pulls back along the same line that he traveled coming in.

4. And, in what could almost pass for a photocopy of the first frame, he returns to standing in front of Gonzaga.

Most of the UFC's heavyweights have proven too tentative around Cigano to follow him, or too slow to catch him, but Mark Hunt is neither tentative nor slow and could very well land one of his signature leaping left hooks as Junior tries to pull away.

And, on the subject of hitting Junior with the left hook, let's take a look at this sequence from the Carwin fight. 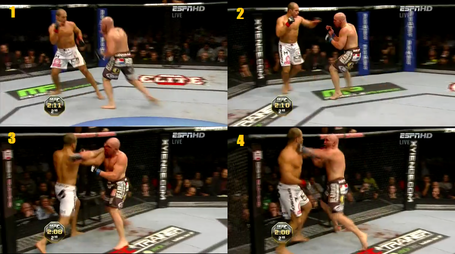 1. Carwin, feinting strides in after Junior, who starts moving straight back away from Carwin.

2. Finding himself backed into the fence, Junior stands straight up and completely out of his stance, starts skipping around along the edge of the canvas away from Carwin.

3. Carwin, seeing that there is only one way for Junior to go, has only to throw a few punches to connect on the young Brazilian who, so used to his punches alone keeping people at range, starts throwing some shots of his own at Carwin. Notice the fighters' feet, however, Carwin is at a nice inside angle, right in position to land a right hand or left hook. Meanwhile, Junior's own feet are both pointed away from Carwin. He's not facing his opponent at all, and he's standing straight up as he tries desperately to make his retreat.

4. Carwin connects with a slapping left hook that stands Junior up even taller. We've got to hand this one to Junior's chin alone because, at this point, he has no stance whatsoever to help absorb the blow.

And Cain Velasquez, with a little help from his relentless takedown game, helped pave the way for future fighters to exploit this bad defensive habit. (GIF)

So there you have it. Junior Dos Santos represents the next stage in the evolution of the MMA striker. But he certainly does not represent the ultimate MMA striker. Will his aggressive boxing be enough to thwart the counter-punching Mark Hunt, or will his shoddy footwork get him in trouble? Tune in tomorrow to read about Mark Hunt's game, and decide for yourself!