In the Season 5 Awards post that was made by the BEST CAPTAIN IN THE GAME, I said this in regards to the award handed out for the top scoring performance of the season:

I feel it wont be my award for much longer honestly. Too many people are too good at this shit. I would truly be stunned if nobody broke it this season.

I’m just glad that person won’t be Tim Burke because god he is the worst.

Well, at least I saw it coming. What I didn't see coming was that the scores for this event would be on more TRT than Vitor Belfort, TODDDUFFEE and Dan Henderson combined. So it is with a heavy heart that I admit my score was beaten by euthanatos....& sgiblin & cardioless & skeebop & phenylenginerods & Brent Ducharme & SteveevaD & benten20 & Violent Newt & swiftman & Kaleb Kelchner & PDG27 & BROCKLESNAR!!!! & pooki & Sugel Mendoza & fedorable & Garrett Turpin & Me & Centre Line & Manch1ld & corey nielsen & Sweet Scientist & sun yue & mmastation & Dave Strummer & duck.

However, none of these people are the new record holder. The person who broke the record by the most annnnnnd NEEEEEWWWWWWW BECW All Time Single Event Scoring King is Ben Bauman who scored 132 points. Congrats and may your record stand forever or until Joe Silva books another stunningly predictable card. Well done. That is seriously unreal.

So unreal that if you broke the previous record by one point, you only manged to finish tied for 23rd in this event. The person who finished in last place scored an otherwise middle of the road 52. For this even however, that was good for dead last. Just crazy stuff.

The hot bout was huge for people as RDA was on the receiving end of a debatable UD in his favor. Had we adopted the rule of the hot bout being decided by the closest bout in the CW instead of all of MMAPG, the hot bout would have been Dias v Lentz.

So congrats to everyone who posted absolutely bonkers scores. As you will see below, team scores are predictably at an all time high for this event as well.

The season standings suffered quite the shakeup as Ben Bauman (duh) took the overall lead as well. duck jumped up 92 spots with his performance and SlipnRip plummeted with a 91 spot CrashnBurn.

All images can be viewed in this TRT-supplemented album for improved viewing pleasure. 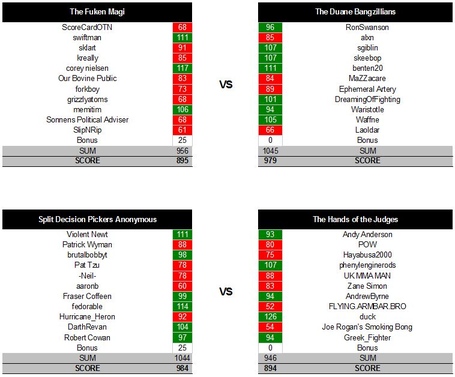 In Division 1, The Duane Bangzillians laid waste to The Fuken Magi & Split Decision Pickers Anonymous left The Hands of the Judges holding nothing but their second loss of the season. 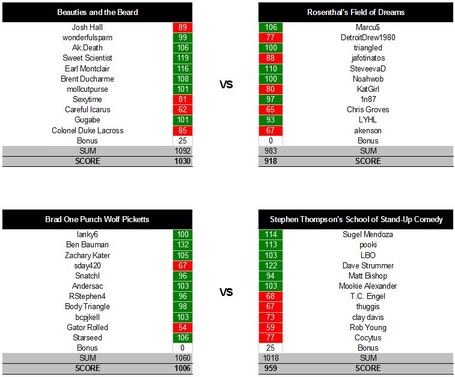 In Division 2, The Beauties evened up their record by taking out Rosenthal's Field of Dreams while Brad One Punch Wolf Picketts nearly had everyone score above average to hand Stephen Thompson's Blah Blah their first loss of the season. 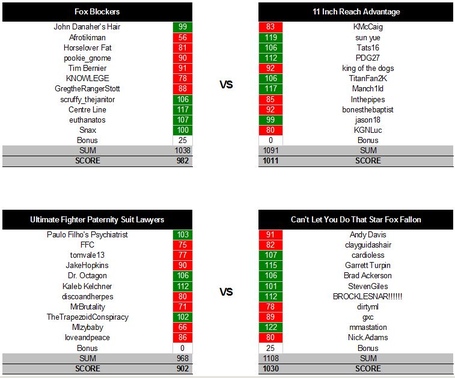 In the Tranny Elbow division, an 11 Inch Reach Advantage was enough to take out Hair's Fox Blockers while the Ultimate Fighter Paternity Suit Lawyers lost their case handily to Andy Davis' squad. 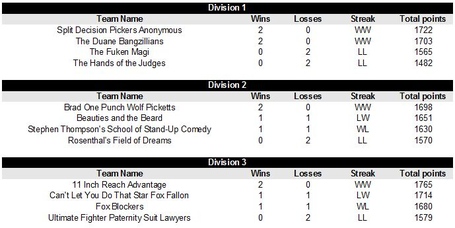 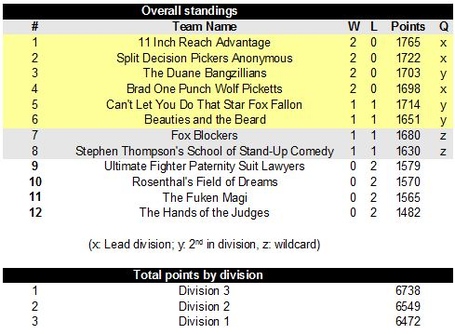 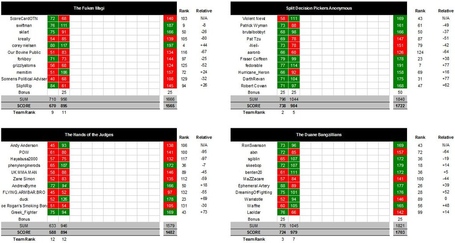 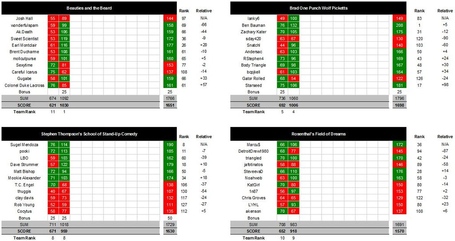 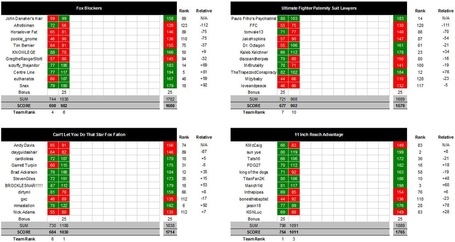 That's all I got this event folks. Be sure to congratulate Ben Bauman when you see him. Odds are he will be half buried in a pile of money, cocaine and nice ladies. Pretty standard fare for folks who do things that awesome.