Ronaldo "Jacare" Souza's submission of the night over Chris Camozzi at UFC on FX 8 was something to behold. From how smoothly Jacare flowed past the guard, to how he snapped on that arm triangle like an alligator onto prey, to how quickly Camozzi went to sleep, it was an all around crowd-pleaser.

It was also a showcase of the excellent transitional game of Jacare Souza. Any UFC fans not familiar with Souza were told that he was a champion in Brazilian Jiu Jitsu, and indeed he remains one of the most accomplished submission grapplers in the world. While many focus on his athletic ability, which is outstanding, Souza's ability to play the game of physical chess when it comes to grappling is sometimes overlooked.

The word "transition" gets thrown around a lot when it comes to grappling, and it simply means the time between established positions. Most fans who have watched MMA for some time or have played the UFC video games are familiar with the ground positions: guard, half-guard, side control, mount, the back, and so on, but there a myriad of undefined positions that exist in the transition between two of those positions.

Great grapplers understand and win those transitions. In a transition there are small windows for a fighter to act and the slightest difference between the placement of a hand, a foot, a knee, or an angle of the hips dramatically changes what is available for the fighter. To navigate these transitions, Brazilian Jiu Jitsu fighters will do a drill refereed to as "flowing" in which fighters trade technique for technique with little to no resistance.

A fighter might go for an armbar, and instead of cranking for the finish allow his training partner to execute an escape and move to counter the escape. It helps familiarize fighters with those awkward in-between spaces and helps build instant reactions so when a fighter is going full force he does not stop to assess the situation.

Jacare demonstrated the drill in his open work out in the lead up to this fight.

These skills are a must at the highest levels of competitive grappling as often the best grapplers have such tight defenses in established positions the only way to catch submissions is to do so in transition. So when Jacare got got Chris Camozzi on the ground, he used the reactions he had developed drilling and "flowing" to catch an arm triangle. 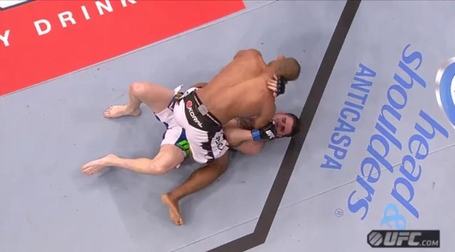 Jacare reached the mount on Camozzi after a somewhat prolonged battle to pass the guard. For all the talk of transition skills, it is a very bad idea to let a fighter of Jacare's level set up shop in the mount and allow him time to work. Camozzi needs to escape this position, and he also needs to play a bit of a chess game. A traditional escape is unlikely to work, so Camozzi attempts an action that has a hidden, second intention. 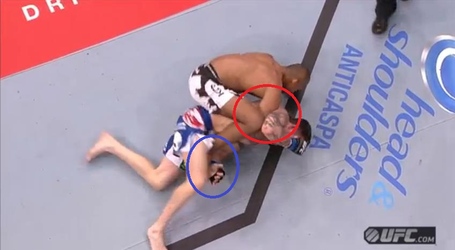 Camozzi bridges and appears as if he is going for a basic bridge-and-roll escape, and Jacare counters it by raising up his hips and looking to take the back. But this is what Camozzi wants, as Jacare puts his right hook in, Camozzi's hand, circled in blue, comes down trapping that foot. Camozzi's intention is now to spin back towards Jacare, trapping the right leg in the half guard. But throughout the movement Jacare kept his right arm, circled in red, in position next to Camozzi's neck. At this point Camozzi is already in extreme danger as Jacare has already set up an arm triangle, ready and waiting for Camozzi to spin right into it. 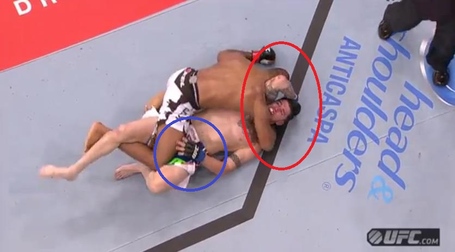 Camozzi does spin right into the half guard, just as he wanted, his hand still pushing on Jacare's knee, highlighted in blue. But just as Jacare planned, Camozzi also turned right into the arm triangle, highlighted in red. In this case Jacare won the transition; not only did Camozzi react in the way Jacare wanted him to, Jacare was able to lever down immediately and smash Camozzi flat, removing any chance of escape.

From there Jacare is able to lock his hands and drive into Camozzi's shoulder, turning him slightly and allowed Jacare to pop out to the side. From there it is only a matter of seconds until Camozzi is out cold. (G)

This was a masterful display by Jacare of the move and counter-move nature of high level grappling and a demonstration that Camozzi was not completely wrong in what he was doing. He was just facing another class of fighter.

For more technical breakdowns be sure to check out the Bloody Elbow Judo Chop stream, for more on UFC on FX 8 click on that stream. For comments on the article scroll down and leave your thoughts or contact T.P. Grant on Facebook or Twitter.

SBN coverage of UFC on FX 8: Belfort vs Rockhold