Judo Chop: The Best and Worst of Vitor Belfort

Connor Ruebusch breaks down the striking of Vitor Belfort as the old, hormone-deficient lion prepares to face off against Luke Rockhold this Saturday.

Share All sharing options for: Judo Chop: The Best and Worst of Vitor Belfort

If you just read my Luke Rockhold Judo Chop, you have a pretty good idea of what this one will entail. If not, here it is. Read it. It's a requirement. Assuming you did read it and just have a foggy memory, I'll reiterate what this "best and worst" business is all about.

Rather than simply point out the flaws in Vitor Belfort and Luke Rockhold's striking, I have chosen to give you the very best aspect and very worst aspect of their respective games. For the purposes of this article, best is defined by the aspect that will serve Vitor best against Luke Rockhold specifically, and worst that which is most likely to get him run over by his younger opponent.

Vitor is best known for his flurries of rapid-fire straight punches, like the brutal onslaught that famously knocked out Wanderlei Silva in his first UFC performance. You can't watch a Vitor fight without Joe Rogan and Mike Goldberg reminiscing about his many first-round rushes and the resultant knockouts.

Vitor, however, isn't really that fighter anymore. In fact, he hasn't been for some time. Not since his triumph over Terry Martin under the Affliction banner have we seen the same reckless, bloodthirsty man that crushed the axe murderer. The knockouts still come for Vitor and in the first round more often than not. But now they come as a result of timing and distance control, rather than simple aggression. Let's take a look at his 37-second destruction of Matt Lindland. Here's a link to the fight if you care to watch it in motion. 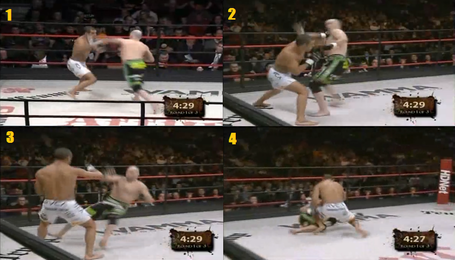 1) The fight begins with Vitor in the Shotokan stance that he has adopted at various times throughout his career. Karate Vitor is probably my favorite incarnation of Vitor, because he mixes his boxing angles with Karate posture and looseness very well, but Belfort seems to have gone back to a more typical Muay Thai style as of late. As Vitor circles around, denying Lindland the range he wants, Lindland gets anxious and lunges with a telegraphed overhand left.

2) Bad move. Vitor slips the punch and lands his own, more compact left straight on the jaw of Lindland, who immediately stumbles to the canvas.

3) Lindland's already on his way down, but this frame is important. Note that, despite the overwhelming success of his first punch, Vitor is in the process of throwing a follow-up right hook. His instinct for combination punching is very helpful against tough-chinned opponents. When the first shot doesn't finish the job, the second and third just might.

4) Vitor pounces. This is where he feels comfortable unleashing the fury that was a trademark of his style in the early days of the UFC. Belfort is probably one of the most potent finishers in the sport. Once he has you hurt, there is very little chance of you surviving the round. And, if like Michael Bisping you do make it to the bell, the second round isn't likely to turn out much better. Old Vitor is adept at reading patterns in his opponents.

Rockhold has a stout chin and, when he's cautious himself, decent defense. But any overeager opponent is likely to walk right into one of Vitor's brutal punches or kicks, and all it takes is one (plus three more to the back of the head). For more examples of Vitor's deadly counter striking, you need only to check out these .gifs of him starching Rich Franklin, Yoshihiro Akiyama, and Michael Bisping.

In fact, let's take a quick look at the clever trick Vitor used in that Bisping finish.

1) Having already discerned Bisping's weakness to the left high kick, Vitor spends the first minute of the second round feinting and drawing Bisping into a pursuit. He walks, almost out of stance, to his left, and Bisping moves quickly to cut him off. Vitor even gives up the outside foot position, and Bisping likely feels that he has the angle to land his right hand on Vitor.

2) Cue Admiral Akbar, because it's a trap. Belfort, launches into a devastating head kick that, by virtue of his inside foot position, swings around the glove of Bisping and catches him hard across the temple and behind the ear. There's no walking away from a kick that clean, and Bisping curls up, awaiting the inevitable Vitor Belfort finish.

The Worst - Weakness to Kicks

Even with some mighty kicks of his own, Vitor's biggest flaw is still his tendency to eat kicks. He sometimes checks kicks, but he rarely reacts well or in a timely fashion. My theory is that he constantly watches the eyes of his opponent. While it is possible to read the intentions of your adversary in their eyes, it is also possible to bite hard on a feint by doing so. Worse, and the real root of Vitor's problem, is the fact that punches and kicks don't start from the face. They start from the hips and shoulders. It's possible to see a punch coming in your peripheral vision, but without watching the torso of your opponent at all, you will rarely see kicks until it's too late.

Vitor's most famous fall was due to this inability to read kicks. 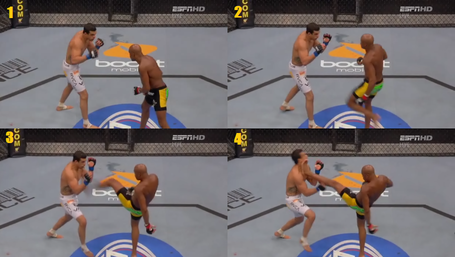 1) Vitor stands in front of Anderson, hunched unsafely forward. This is where the stance displayed by Karate Vitor, or one more like the stance espoused in my Bloody Basics piece would have helped. Vitor is staring into the eyes of Anderson and Anderson, cheeky bugger that he is, stares right back. Occupying Vitor's eyes with a mid-fight stare-down is genius.

2) Never giving any impression of his intended target, Anderson continues to stare into Vitor's eyes as he launches into the kick. Since the front kick is the fastest kick one can throw, and since there is very little hip movement involved, Vitor is left to guess at the incoming attack.

3) He guesses wrong, hunching forward further and lifting his leg as if to check a low kick. Anderson's foot is still completely out of Vitor's line of sight.

4) The front kick lands before Vitor can even lift his leg fully for the low kick he thought was coming, and he becomes forever part of Anderson Silva's lengthy highlight reel.

Rockhold isn't as slick a kicker as Anderson, but he has a solid arsenal of kicking techniques, and Vitor has yet to show much improvement in dealing with any attacks that begin below the waist.

My money is on the time-tested power and well-honed timing of Vitor to win this fight, but it could very well end up like Vitor's 2006 loss to pre-uber Overeem, in which he was mystified by the kicks of his taller opponent and outgrappled. Saturday we'll find out if Vitor has the tools to win the fight on the feet, and the takedown defense or guard game to keep it there.