Judo Chop: The Best and Worst of Luke Rockhold

Connor Ruebusch breaks down the striking of Strikeforce middleweight champion Luke Rockhold as he gets set to challenge Vitor Belfort at UFC on FX 8.

Share All sharing options for: Judo Chop: The Best and Worst of Luke Rockhold

For Ben Henderson's title defense against Gilbert Melendez, I examined the flaws in each man's striking game, pointing out the defensive and offensive holes that their particular styles presented. Unfortunately, this approach tends to misconstrue the true value of the fighter in question. I never intended to give the impression that Benson Henderson is some kind of useless punching bag, only point out that no fighter, even a champion, is invincible. But screw it--criticizing is easy. Today I'm taking a slightly different approach.

It's been severely under-hyped, but Luke Rockhold's first UFC bout, set to take place this Saturday, May 18th, should make for an exciting and meaningful bout. Not only will the result determine one of the middleweight division's top contenders, but this classic Old School vs. New Breed matchup will almost certainly give us some striking fireworks worthy of a main event.

So how am I approaching this fight differently? Well, like Henderson vs. Melendez, I'll be breaking down each fighter individually. But, to give you a better idea of their respective striking games, I'm going to take a look at the bad and the good. Specifically, we're going to look at the best part of each fighter's striking--the aspect most likely to bring them success in this fight--and then the worst part--the aspect most likely to leave them face-down on the canvas. Like the title says, we're looking at Luke Rockhold first.

The Best - Variety of Strikes

Rockhold has come a long way since his mixed martial arts debut. Once a submission grappler with a limited array of looping punches, Rockhold now possesses a startling array of strikes, including a sharp jab, solid straight left, and a bevy of impressive kicks. This variety of strikes has been key to Rockhold's success against the best of Strikeforce's middleweight division and will certainly be his greatest asset against the somewhat kick-averse Vitor Belfort.

Let's take a look at some of Rockhold's techniques. 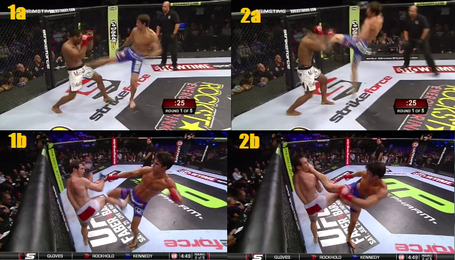 1a) In the first sequence, Rockhold lands a lead right low kick. Because he was hit by the same kick just seconds before, Jacare has an easy enough time of bracing for the blow.

2a) Unfortunately for Jacare, it's a set up. Landing lightly with the first kick, Rockhold leaps into the air to turn himself hard into a follow-up left kick to the head a la Lyoto Machida. The blow is mostly absorbed by Jacare's glove, but it is an excellent example of Rockhold's unique striking.

1b) In our second sequence, Rockhold has backed Tim Kennedy up against the cage. Much like Rory MacDonald, who has recently acquired a proclivity for this technique, Rockhold likes to limit his opponent's space and then throw a Brazilian kick, a Technique named not for its Braziliah heritage but for the Brazilian heritage of the Karateka who made it famous, such as Glaube Feitosa. Here's Feitosa's deadly Brazilian kick:

The chamber of the kick imitates a low kick or front kick, and then the fighter turns the hip way over and loops the kick in a slightly downward arc over the gloves of the opponent.

2a) Because he throws a lot of probing low kicks, Rockhold has no trouble getting the cowed Kennedy to bite on his feint, and cracks him in the temple with his instep.

Luke Rockhold is not particularly creative with his set ups. Not until recently has he thrown anything but the most rudimentary punch combinations, and he goes back to the well on a few switch ups and set ups a little too often. But he is comfortable throwing a wide array of acrobatic kicks (such as the very slick tornado kick he utilized against Jacare), and has a natural sense of timing with his ever-cleaner-looking punches. He's also confident in his skills, helped by the fact that, because of his steadily improving posture and awareness in the pocket, he can absorb some serious power. Tim Kennedy landed some very hard shots on his jaw, and the brick-fisted Jacare was unable to put him away.

Unfortunately for Luke, Vitor has deadly power in his hands, and the simple fact that Rockhold was somewhat hittable in his last fight, against a completely overmatched Tim Kennedy, doesn't look good for him.

The Worst - Rushing and Reaching

For Rockhold, rushing and reaching are almost always one and the same. In brief exchanges and pot-shotting skirmishes he maintains good composure. He has developed a very nice right hook that, when his straight left has him falling toward his opponent, neatly pulls him back onto his back foot and mostly out of harm's way. When faced with an elusive or inactive opponent, however, Rockhold has a habit of starting to chase after his quarry, and when he chases, he gets overeager, leaning forward past his own feet and slinging wide, looping punches. He's sure to face a patient and measured Vitor Belfort, the same Brazilian that walked Michael Bisping into a left head kick capable of decapitating an elephant just four months ago.

Here we can see his habit manifesting itself in his most recent fight. 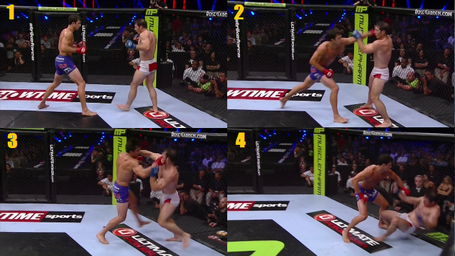 1) Rockhold begins, already relatively exposed due to his low hands and aggressive posture. He prepares to pounce on the stymied Tim Kennedy.

2) His favorite strike, the lead straight left, has him lunging forward, chin exposed. Kennedy isn't a very clever striker, however, and he gets himself completely out of position as Rockhold leaps in, slipping successfully, but putting himself in harm's way for the follow-up punch. A left hook after that slip would likely have flattened Rockhold who, in his compromised stance, had a lessened ability to absorb damage.

3) Rockhold eats Kennedy's awkward right hook with ease and lands a much more significant shot of his own, a rising right hook to the jaw, which buckles Kennedy's legs.

4) A final blow pushes Kennedy off his feet.

Don't be fooled by Rockhold's success in this exchange, though. Tim Kennedy was really out of his element against an opponent that he couldn't outgrapple, and his striking isn't anything to write home about. The important thing to take away from this diagram is Rockhold's positioning and stance. From the very first punch he is leaning past his own feet, which are busy running out of stance to keep up with his upper body. This is the very definition of running in chin-first.

Rockhold faces a patient and potent counter-striker in Vitor Belfort, and he will need to have shored up this hole in his game by then. Vitor has power in his every strike, and the quick feet to tempt Rockhold into one of his desperate combinations only to pull back and counter. Despite Luke Rockhold's own claims that Vitor will be unprepared to face another southpaw, Vitor proved capable enough of dealing with the stance of Rich Franklin, and ended that fight with a punch that barely clipped the veteran on the top of the skull. It doesn't take much for Belfort to put you away, and this is a five round fight.

SBN coverage of UFC on FX 8: Belfort vs Rockhold