MMA is over 20 years old as an official sport. From it's inception it has combined a variety of styles, techniques, and formats that have emphasized any number of skills. Recently one skill has begun something of a renaissance in MMA, the ability to kick.

Share All sharing options for: Kicking is starting to impact MMA striking

When I chose the above photo for this article, I did so with a specific intention. I want you, as readers, to know that I understand the claims I'm making when I say that kicking is a new skill to MMA. In it's earliest days MMA emphasized the exoticism of techniques, taking often under-trained (in MMA) fighters and matching them against one another to see which of their martial skill sets was king. For many traditional martial artists, this was something of a wake-up call.

Much of MMA's early success belonged to grapplers, first Royce with his Jiu Jitsu submission skills, and then the catch-wrestling Shamrocks and eventually the Folkstyle and Greco-Roman grapplers like Dan Severn and Mark Coleman et al. There were notable exceptions, Bas Rutten comes most immediately to mind, but much of the sports early history was the emergence of grapplers as dominant martial artists.

The effect that this had on the sport as a whole was profound. I don't think that there was any way to prevent it, but many traditional martial artists and strikers avoided MMA, it became a sport dominated by grapplers. Those strikers who found success found it largely with their hands. Fighters like Vitor Belfort, Igor Vovchanchyn, Fedor Emilianenko, and eventually Chuck Liddell were feared for their punching power. Those fighters who could win with kicks were a rare breed.

In the video below, Frank Shamrock runs through some basic MMA kicks. For as ridiculously simplistic as it is, he pretty well covers what makes up most of the traditional MMA fighter's kicking arsenal. In fact I'd say him throwing in a side kick goes above and beyond what most fighters would display in MMA even five years ago.

Pedro Rizzo, Mirko CroCop, and Shogun Rua were all known for their incredible kicking power, but it came with a very real price, and distinct limitations. When these fighters weren't able to deal heavy damage with their kicking arsenal they were forced to abandon it for other skills, or lose the fight. The kicks that most fighters, even the best kickers, used were almost entirely limited to the inside leg kick, the outside leg kick, and the head kick (Shogun, of course, employed a variety of soccer kicks and stomps as well). Smart fighters, who checked well and closed distance could find ways to work around taking kicks altogether.

This has been the shape of modern MMA for years. Even talented strikers kept themselves to a minimal kicking style, using leg kicks to hobble opponents and throwing the occasional head kick in hopes of catching a fighter unawares. I'm not sure how many kicks B.J. Penn, Rampage Jackson, and Urijah Faber threw in their day, but it wasn't a ton. Even GSP, once a dominant kicker, took to a more boxing centric offense. The fear of getting taken down and controlled was omnipresent; fighters didn't want to lose fights because they were throwing overly aggressive techniques and giving their opponent easy access to single and double legs. But change has come, in the slow and steady (and often unrecognized) way it does. 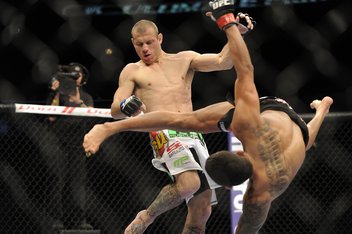 It's been 20 years, grappling has been established as a staple that every fighter must have. And more fighters, comfortable in their grappling fundamentals, are opening their striking games in the knowledge that they can deal with the results of whatever dangers they put themselves in. It's no longer a case of kickers looking to end a fight with their techniques. Fighters are using them to turn the tide in otherwise equal striking exchanges; to score points and gain momentum when other skills fail to give them a clear edge.

For evidence of this, look no further than Renan Barao's recent title fight with Michael McDonald. The two fighters exchanged often and equally throughout the fight, with McDonald's crisper, more powerful boxing often getting the better of Barao early. But as the fight wore on, it became apparent that Barao possessed a key advantage over McDonald, his varied kicking game. He was able to stymie much of McDonald's striking offense by throwing a variety of kicks that threw McDonald off his stride and kept him guessing in exchanges. A very similar effect (although it went the distance) could be seen in Bellator 95's Mike Richman vs. Frodo Khasbulaev fight. Richman possessed the better boxing, but Khasbulaev's ability to throw a wide variety of strikes eventually let him get the better of the fight.

I don't want to get overly lost in detail here, I'm touching on these fights as part of the wider trend, Amagov vs. Spang, Larkin vs. Carmont (although Larkin "lost"), and Henderson vs. Melendez have all shown similar trends of fighters throwing varieties of kicks, not as a method of finishing the fight, or even doing an overabundance of damage, but as a clear method of high volume point-fighting. This is a major shift in quiet disguise for MMA. It has yet to reach all levels, larger fighters will always lag somewhat in technical innovation, but the days when a striker with a one dimensional arsenal can dominate the sport are coming to a close.