Matthew Maldonado and Nicholas Schultz were indicted on somewhere between eleven and nineteen counts in the alleged rape of a fellow Team Lloyd Irvin student on New Year's Eve.

Indictments in the case of two Lloyd Irvin students who allegedly raped a female student on New Year's Eve came down yesterday. The D.C. Superior Courts website lists eleven counts against each man.

Here are screenshots of the charges: 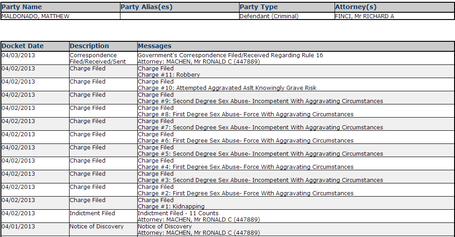 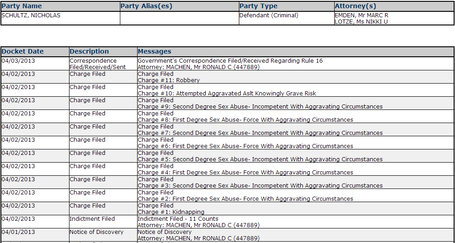 From what I know, there is a plea offer on the table which is "wired" i.e. both guys have to take it or neither can take it. The offer is that both plead to one count of second degree sexual abuse and agree to a Rule 11(e)(1)(C) sentence of a number of years in prison, some years above the top of the sentencing guidelines for second degree sexual abuse, but some years below the minimum for a first degree sexual abuse conviction under our guidelines. This case is charged under D.C. law and is venued in D.C.’s Superior Court. Rule 11 under D.C.’s rules is basically identical to federal Rule 11, meaning that the terms of a plea under Rule 11 has to be approved by the judge, who also "signs on" to such a plea. Therefore, everyone knows what the sentence will be.

To date, neither defendant has accepted an offer, and neither has made any credible counter offer, although there have been some discussions that have led nowhere. The almost-certain legal strategy IF they go to trial is to claim consent.

We'll have more details as they become available.

You can read our full coverage of the New Year's Eve case, and the fallout for Team Lloyd Irvin in our StoryStream.