Al Iaquinta and Joe Proctor were set to fight at UFC 159 tonight. However, injuries took their toll on both fighters and that bout will not occur. In this post, I will focus more on the knee injury that Iaquinta suffered, including his 2012 knee surgery.

News of Joe Proctor's injury surfaced on April 11th. At the time, no information was available about the specifics of the injury. However, Proctor tweeted news that his "surgery went great" on April 23rd. He apparently had surgery to his shoulder, as is seen in this picture that accompanied his tweet.

On the day following Proctor's exit from the fight, Al Iaquinta decided to bow out of UFC 159 himself. Fightline.com reported that this was due to a leg injury. There are currently no details on this injury, but there is a decent chance that the injury was to his knee. Iaquinta injured his right knee in 2012, while competing on season 15 of TUF. He underwent arthroscopic surgery of the knee July 31, 2012. In an August 2012 interview with Jim Genia, Al stated that he "tore some cartilage" in his knee, with an expected three month recovery time.

He was on crutches for a period of time, with limited weight bearing on the leg and his knee in an immobilizer. He was also using a continuous passive motion (CPM) device for 21 days after surgery. The CPM is used to restore range of motion to the knee, without weight bearing stress through the repaired meniscus.

This Constant motion machine will be my best friend for 6 hrs a day for the next 21 days twitter.com/ALIAQUINTA/sta…

Based on this information, I believe he probably had surgery to repair a torn meniscus in his knee, rather than to excise the torn part of the meniscus. So when can the meniscus be repaired, as opposed to removing the torn piece of the meniscus? And what is a meniscus anyway?

The meniscus is a C-shaped disc that occupies the space in the knee joint between the femur and the tibia. There are two menisci- medial and lateral. The menisci serve as a shock absorber in the joint. In the picture below, you can see the orientation of the menisci in relation to the other structures of the knee. 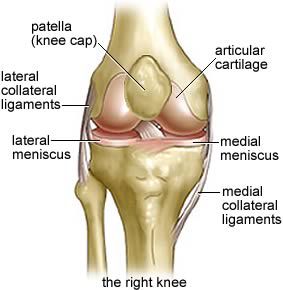 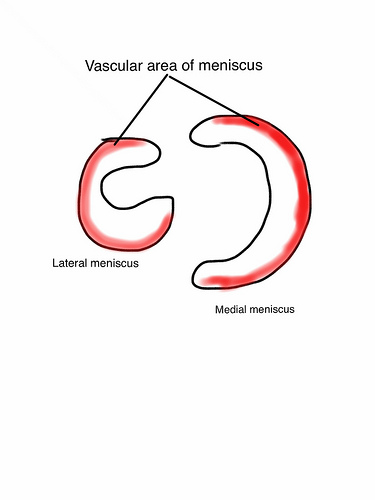 If the tear occurs in the blood-rich area of the meniscus, it can usually be repaired by stitching the torn edges back together. Ultimately, this type of repair can be more beneficial in the long run for the athlete, as it restores the substance of the meniscus closer to normal. However, the recovery from this can be more tedious, and can be up to 3 or 4 months (which is in line with the time frame that Alquinta noted himself after the 2012 surgery). After this type of repair, weight bearing on the affected knee will be limited for a few weeks. Active movement of the knee will be limited as well.

Now the question is this- what happened to Iaquinta's leg that caused him to pull out of tonight's UFC 159 fight? In his interview with Fightline.com earlier this month, he said the following:

"I have been training through an injury to my leg the past six weeks, re-injuring it again a little more seriously last Saturday. I was going to push through it and fight anyway. When I heard Joe pulled out, I decided not to fight at UFC 159 and rehab my injury back to 100-percent before taking another fight."

Again, I believe he probably had an injury to the knee. Whether it is the same knee that had surgery in 2012 is not known, and from his statement, it appears that he is choosing the more conservative path of rehabilitation instead of surgery at this point. I will update this post if more specifics come to light.