Gilbert "El Nino" Melendez will face Benson Henderson at UFC on FOX 7 for the lightweight title. This is Gilbert's first fight under the UFC banner, and his first fight since May of 2012. In September of last year, Melendez suffered a separated shoulder injury to his right shoulder. This caused him to withdraw from his scheduled September 29, 2012 Strikeforce bout with Pat Healy. The shoulder injury again forced Gilbert to pull out of the rescheduled fight with Healy in January this year. Gilbert tweeted news of the injury in September last year, so he was effectively out of action for 4 months.

What is a Separated Shoulder? 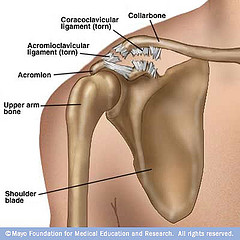 This injury is completely different from a dislocated shoulder, which does affect the actual shoulder joint. A separated shoulder injury is graded based on severity of injury to the ligaments that stabilize the joint, as well as displacement of the ACJ. It appears to me that Gilbert had a grade III separated shoulder. I base this on (a) the lengthy time he was out of action and (b) the appearance of the tell-tale bony deformity on his right shoulder (see picture below). A less severe grade I or II injury would keep a fighter out of action probably 8 weeks at the most.

In the picture above (a screen capture from his weigh-in for tonight's fight), you can see the bony bump at the top of his shoulder (red arrow). This occurs when the clavicle migrates upward due to tearing of the ligaments that stabilize it at the ACJ. It is my experience that one does not see this bony bump in the less serious grades I and II shoulder separations. A grade III shoulder separation is pretty serious, but usually heals without surgery. (There is no indication that El Nino had surgery for his injury.) The shoulder is immobilized for a period of time to allow for healing of the ligaments. This is followed by a progression of rehabilitation from restoration of full range of motion of the shoulder, to building strength of the muscles and restoring normal movement to the shoulder blade. Rehabilitation and strengthening of the muscles that move the shoulder blade are very important, as it is movement of the shoulder blade that imparts movement stress on the ACJ.

By now, Melendez should have had complete recovery from his separated shoulder, as it has been 7 months since the injury occurred. I don't anticipate any problems with the shoulder from a practical standpoint during the fight. I think the greatest risk is if Gilbert takes a fall directly on the point of the right shoulder, especially if this is done forcefully, such as a takedown where his right arm is held at the side of his body. This would probably reinjure the joint.