UFC: Jon Jones gets his own 'Bones' shoe from Nike

Share All sharing options for: UFC: Jon Jones gets his own 'Bones' shoe from Nike

Jon Jones Knows. Sounds like a typical ad campaign Nike might run for one of it's sponsored athletes in the MMA sphere. Fortunately, they didn't go that route this time. There is no 'knows' in Bones' campaign. There is, however, a shoe. That's right, Nike gave Jones his own shoe.

It's not a bad looking shoe either. It's a simple affair, black and red with some cross weaved leather. I actually dig the design, myself. Mr. Jones posted up pics of the shoes today, via his Instagram and Twitter accounts for his fans to see.

I spoke with Dylan Horner, who works for the Las Vegas retail branch of Nike, and specializes in the Training / Merchandised licensing category. He was able to let me know that the shoes, as well as three shirts exclusively designed for Jones, will be available on Saturday, April 20, 2013. He said of the design,

I can tell you tho that it is a Nike Free Trainer 5.0 and features black 3M material on top of a sports mesh. Retails for $105 plus tax.

They will also reach Nike's online store either that same day, or in the days immediately after the store launch. Jones will meet Chael Sonnen in the octagon next weekend at UFC 159 in New Jersey at the Prudential Center.

UPDATE: I have just been told that there IS a 'Bones Knows' shirt coming in the next week.

Here are some pics taken from Jones' Instagram feed for you to peruse: 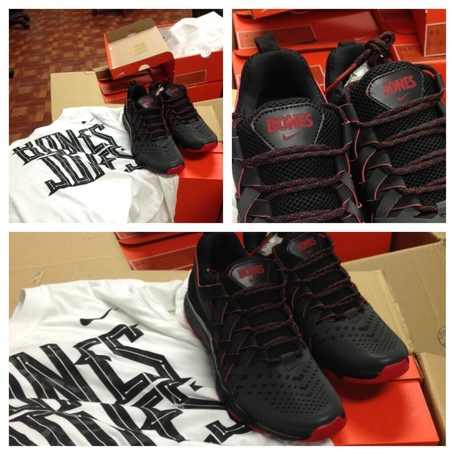