MMA fans recall the name "YAMMA" as one of the worst one-and-done promotions in the history of the sport. What led up to the creation of this concept, and was it really as bad as we think it was?

Eight years after he and his partner, Art Davie, sold the UFC to Zuffa llc., Bob Meyrowitz decided to set foot back into the world of MMA. In late January in 2008, the co-founder of the original NHB company announced his return to pay-per-view with a new concept, "YAMMA Pit Fighting".

Set for action on April 11 at the Trump Taj Mahal in Atlantic City, New Jersey, this event would feature the first one-night eight-man tournament in the US in years, the last well-known professional one being the big "IFC: Global Domination" tournament five years earlier. The heavyweights would break in the pit at this inaugural event, which included Ricco Rodriguez, Travis Wiuff, the late Sherman Pendergarst, and many newcomers to the sport such as Chris Tuchscherer, Tony Sylvester, and a guy named George W. Bush. Augmenting this would be the start of a new division in the sport, the "Masters" division, which featured the legends of MMA back in action against other legends. The first two matches in this division were to be Don Frye VS Oleg Taktarov and Gary Goodridge VS Butterbean.

The big mystery surrounding the event was what the word "YAMMA" actually meant. With the all-capital letters, some speculated it was an acronym, perhaps "Young American MMA". In reality, the word was Japanese - "Yama" meant a pit-like valley (in Russian, the word also meant "bowl"). It was an early allusion to what the big gimmick for the company would be beyond the tournament format - a new fighting surface. Fighters and fans were left wondering what the new cage would be like, with teasers sprinkled on the internet leading up to fight night.

The reality of the YAMMA was that it was, indeed, a pit. A circular cage was implemented, with the addition of sloped sides all around the floor to keep the action "funneled" into the center of the cage. This new element of height theoretically would mean less clinching on the cage, and therefore, more striking and takedowns.

The intrigue behind the YAMMA began to fall apart when fighters in the tournament began pulling out and were forced to be replaced. What hurt the fledgling company more was when their "Masters" started doing the same. Don Frye suffered an injury in training on his shoulder, so another UFC veteran was called in to take his spot against Taktarov, Pat Smith. Weeks later, Smith was arrested for possession and speeding, and was yanked off the show. Maurice Smith was the next legend to step in to meet the Russian fighter in the pit, but as quickly as he signed up, he pulled out a day later, claiming illness. Finally, Mark Kerr stepped in to give Taktarov an opponent for the debut event.

The other super fight did not fare much better, as Gary Goodridge was knocked out in a fight less than two weeks before YAMMA against Choi Mu Bae in South Korea. With the safety of their fighters in mind, the NJSAC refused to permit Goodridge to compete in the show, and Butterbean was now left without someone to fight. Surprisingly, Pat Smith, now clear of his legal issues, was called back in to face the immense boxer turned MMA fighter.

The day before the fights, Ron Waterman was flown to New Jersey as an alternate, just in case anyone, be they in the tournament or super-fight, withdrew from the card. This was also the same day as the weigh-ins, and also the first time any of the fighters would see the pit in person. Each man had 30 minutes inside the structure to try it out, and it was here that the biggest flaw of the card was shown - not so much the pit, but that the tournament was over-booked with wrestlers who would resort to taking down each other off that slope and use it to hold their opponents down, since the person on the bottom would be unable to get any leverage due to the deep incline. 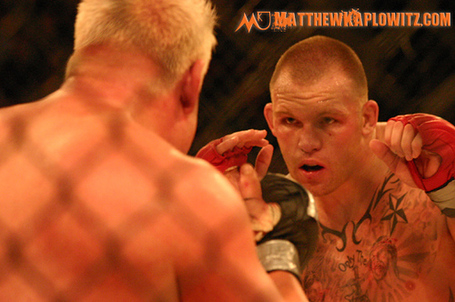 That would be a fine strategy for most of the successful fighters in the tourney, as the only way the NJSAC would allow this elimination format was if the quarter-finals and semi-finals were conducted with a single five-minute round. Only the finals would be three five-minute rounds, which led to many early fights to be played safer and slower than fans would have liked.

Calling the event would be the original UFC announce-team extraordinaire, Bruce Beck and Jeff Blatnick. Joining them as the third man in the booth would be the original UFC matchmaker, John Perretti. Despite being a wealth of knowledge, viewers at home felt that Perretti was overly critical and negative of the fights, citing his dislike for "superman punches" and a variety of other techniques.

The worst offender of the show was not a fighter or commentator, but was actually the announcer. The raspy-voiced talk radio personality, Scott Ferrall, had the dubious honor of announcing the fighters, but was unable to stick to his cue cards. Ad-libbing a majority of his lines, Ferrall gave viewers in the arena and home such memorable lines as, "Pacing like he hasn’t eaten in a week," "He’s goin’ to the electric chair", and "shake it oooppp". I have plenty more of his quotes on this page, but his best might have been calling the YAMMA title belt a "strap-on" and giving one of the fighters a new nickname - Travis "Can I get a room with a" Wiuff.

The most important question about this show would be "How were the fights"? A rundown of the whole event will be for a future article, but aside from a few stinkers in the first round of the tournament, the majority of the fights were decent, with a pretty exciting final fight between (spoiler alert) Tuchscherer and Wiuff. In the end, Wiuff would take the first and only YAMMA Pit Fighting tournament championship, a title that was good enough to be used in his pre-fight introduction when he began fighting at Sengoku a few months later.

The fights in the "Masters" division were another story. The fight between Oleg Taktarov and Mark Kerr was actually pretty exciting, ending with one of the best kneebar submissions out there from Oleg after surviving a punch courtesy of Kerr that dropped and nearly ended the fight earlier. However, most fans remember the Butterbean VS Smith fight better, and it truly is one of the worst fights ever. Don't take my word for it, please try and sit through it. I dare you!

The reviews of the show were scathing at best. Five Ounces of Pain called it a "train wreck" whose novelty wore off once you saw the subpar action. A local reporter from New Jersey who attended the show shared the same complaint of every single person in attendance, that the sloped nature of the cage meant once the action hit the ground, no one in the arena could see it. Luckily, the poor attendance meant few ticket-buyers had to suffer through that. One of the few positive reviews, The MMA News said the show sounded good (which, to me, meant they did not see it), but had little faith in the tournament format continuing for much longer. As someone who saw the show in person, I enjoyed myself and felt the show was much better in person than it was on TV, with the good matches outweighing the mediocre.

YAMMA was planning a second show for June, but the company collapsed not long after their debut. 2008 was a tough time for MMA in general, as the IFL had also began to wither and die, as had Bodog Fight. Pro Elite was still clinging to life, but would not be around for much longer either. If you can handle watching the entire event, YAMMA was not as bad as your memory might have made it seem. Some of the fights were actually pretty good, but the show felt more like a regional level event than a pay-per-view worth spending $35 on (yes, that was the actual price for this show). If anything, YAMMA was a cautionary tale for future promoters on how to (and how not to) run an MMA promotion. The company did some good things, building newer fighters around well-known names in the sport to build a foundation instead of just bringing in squash matches with the names against newcomers. Unfortunately, the execution of the event and some misguided matchmaking resulted in a show as uneven as the slanted cage itself.

Happy YAMMAversary! Where were you when you first saw the YAMMA?