A new Bloody Elbow technical series, looking at the foundational techniques of different martial arts and those unique to Mixed Martial Arts. This installment explains the elements of an effective stance designed for striking.

Up to now the Bloody Basics series has been focused on grappling techniques. That's fair enough. Even though we're mostly past the days of one-dimensional grapplers dominating the sport (keep the traditions alive, Ben Askren), success in MMA still depends heavily on grappling skill, and this is an MMA website. Rolling and wrestling is only part of the equation for most, though. We're seeing a resurgence of dominant strikers now that a thorough understanding of grappling fundamentals is nearly universal at the highest levels of fighting. And since the complex art of striking is criminally misunderstood and underappreciated, especially in the multifaceted sport of MMA, we're going to take a look at one bloody basic that will do a lot to keep you from getting bloodied. Let's talk about stance.

First things first: there are a lot of myths out there about what stances work best for MMA, so let's establish some basic tenets.

1) A fighter's stance will depend on the preferred weapons of that fighter. Someone who shoots for a lot of takedowns, for example, will likely hold himself differently than someone who throws a lot of kicks.

2) A squared stance is not necessary for MMA. Jiu jitsu and wrestling, on the other hand, are. Understanding these arts is far more important to your ability to stop or counteract takedowns than squaring your hips, no matter what Bas Rutten tells you.

3) The best defense is built into the stance. MMA gloves do very little to defend one's head when simply held in front of the face. The hands can actively defend, but the most successful defensive fighters in history have always relied on stance and positioning before their hands to keep from being hit.

Now let's get into it.

Opinions will vary on this (that's your cue, comments section), but to my mind the most important aspect of any striking stance is control of distance. The other Bloody Basics authors will agree that the ability to control the space between you and your opponent's bodies is crucial to successful grappling. No one's going to be escaping your side control if he can't create the distance necessary to stand up or get back to guard. Likewise, you will be very difficult to hit if your opponent cannot reach you.

Sounds simple enough, but this idea is hardly stressed in boxing nowadays, not to mention in MMA, where the overall level of striking skill is far, far lower. An excellent video by boxing trainer Daði Ástþórsson explains how a stance can control distance, both offensively and defensively.

Charley Burley controls the distance between himself and his opponent and, most importantly, between his head and his opponents weapons, by tilting his hips, bending his knees, and keeping his back straight. The chin is not protected by the shoulders being hunched, as many misinformed coaches teach their students, but by virtue of the fact that the hips are tilted toward the rear leg and the back is straight. This leaves the shoulders with a natural cant that automatically hides the chin behind the lead shoulder. I mentioned above that good defense is built into stance--this is how. A stance lessens the need for great reaction time by giving you enough room to work.

This explains the rather goofy looking stances of old-timey boxers, who held their hands low not because they wouldn't be punched in the face, but because they knew that distance and movement would do far more to protect their chins than their ungloved hands. This is not commonly seen in MMA, but these principles are all essential elements of the stance of one of my favorite fighters, and one of the best strikers in the UFC, Lyoto Machida. Compare his stance with that of Jim Corbett, one of the men credited with transforming the sport of boxing from a slugfest into the sweet science. 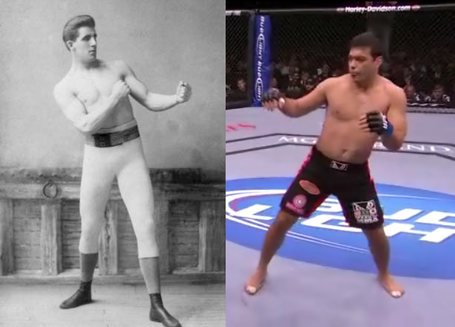 The weight is back, with the head over the rear hip. About 60-70% of both fighters' weight is distributed toward the back foot. This both loads the rear hip to add power to strikes, and protects the head. With space to think and see, the martial artist has a much easier time of defending and countering. This, much more than natural speed, is the secret to Lyoto's success with counterstriking. Not only is his head farther from his opponent, but it is held off-center, with his shoulders naturally tilted to provide some measure of protection. The chin is down, and the shoulders back. Good posture is maintained even when punching, so that power comes from the legs, hips, and core, not merely the shoulders and back. And, with the hands not required to defend the head, they are free to strike from unique angles and defend the body. Or, in Machida's case, to flail around wildly.

The final important aspect of stance is the positioning of the lead foot. To best defend against punches, the lead foot, and likewise the lead hand, should point at the centerline of the opponent's body. This ensures that you are always properly facing him--in position to hit him without being hit yourself. Next time you watch a boxing match, or any other high level striking exhibition, take note of the "most boring" moments. Watch the fighters' feet as they constantly make tiny adjustments, jockeying for dominant position on one another. This is the invisible battle of positioning that makes a fighter truly dangerous to any opponent.

As I said, opinions vary on the best striking stance. Muay Thai often teaches to pull the body and hips back and place the head forward, but I assure you, this has more to do with the rarity of head punches in Muay Thai rules than it does with the utility of this stance for general fighting. It also explains the relatively poor showing most pure Muay Thai fighters make under international kickboxing rules. And just to convince you that these principles are the best for defending blows to the head, here's a couple of boxers with absolutely terrible stances. Heads close together (meaning no room to defend or attack effectively), weight completely forward (meaning no meaningful power in rear-handed strikes), bodies not facing each other properly. It's an ugly affair.

And, as counterpoint, I give you Mr. Bernard Hopkins. Head off-center, rear hip loaded, weight, if not always back, ready to be pulled to the back foot at any moment. Here he is, beating his own record for oldest boxing champion at the age of 48. If nothing else convinces you that stance is key to defense, B-hop's ability at his advanced age should. (Note: As it turns out, the video for Hopkins vs. Cloud is not available, so here's Hopkins vs. Kelly Pavlik instead. You'll still get to enjoy an old man whooping on a youngster who, by most standards, should be able to beat him. All credit for that accomplishment goes to B-hop's excellent fundamentals and skill.)