Bloody Basics examines the mount position, one of the most dominant in all of combat sports. In this article T.P. Grant examines the basics of controlling and attacking from the position.

Share All sharing options for: Bloody Basics: The Mount 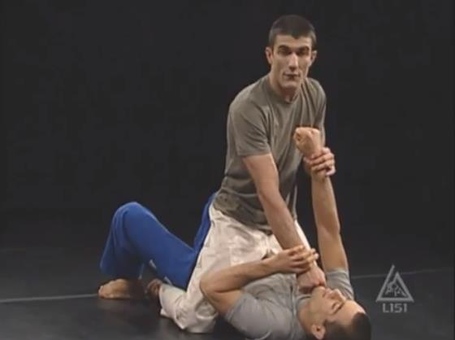 In MMA or self-defense situations this gives the top fighter significant advantages, he can strike and choke with the advantage of gravity, while the bottom fighter is fighting against it. In a self-defense situation the top fighter's groin is exposed, but any attempt to attack there leaves the bottom fighter's eyes, face, and neck exposed to an attack.

What surprises many novice grapplers is how difficult the mount is to maintain, even against other novices. So in grappling classes when the mount is first taught, the focus of that initial lesson is often controlling and maintaining the mount.

The first control drills are often hand fighting to stop untrained fighters from using their arms to muscle the top fighter off. The top fighter uses a variety of grip fighting movements to keep the bottom fighter from being able to push against the top fighter's chest, hips, or legs. The top fighter will also plant his hands on the mat for extra base and to keep his legs from getting trapped to prevent being rolled over.

Here is Rorion Gracie demonstrating the basics of this kind of mount control:

Now it is important to note that this is geared towards controlling a fighter not trained in escaping the mount position. A trained fighter will make better use of his legs when defending this position. The bottom fighter can use the buck-and-roll escape or the knee-to-elbow escape that have been covered in previous Bloody Basics articles, and it takes a different kind of defense to prevent those escapes.

It is a very powerful position and here is master of all things mount, Roger Gracie, demonstrating the basics of the high mount and an armbar attack from there.

Sometimes, however, in spite of all controls used the top fighter is going to lose the mount as the bottom fighter goes to buck over, it is at that point that the top fighter must win the transition and take the back. Similar to moving from the modified mount which was shown above, the taking of the back involves taking pressure off the bottom fighter and allowing them to roll, and positioning the legs as they move.

To demonstrate the technique here is Professor Young of Champions Jiu Jitsu in Texas, now a black belt under Carlos Machado and a retired police officer. He also gives us a bonus technique of how to move back to the mount from the back.

So that is the Bloody Basics of controlling the mount, and once a fighter has mastered that there are a variety of attacks from the position. To end with, here is Saulo Ribeiro, BJJ legend, and UFC Welterweight Champion Georges St. Pierre teaching a variations on the armbar from mount.