The UFC filed a DMCA claim to have video of one of their executives telling the Nick Diaz camp of some last minute rule changes removed from YouTube. BloodyElbow examines if the DMCA claim was a legal use of the copyright protection laws.

Following UFC 158, a video surfaced showing UFC Senior Vice President of Business and Legal Affairs and Assistant General Counsel, Michael Mersch, speaking with members of Nick Diaz's team and informing them "off the record" that there were some unusual rules in play for the weigh-in. In short, Mersch stated that Quebec was not "counting decimals" meaning that the main event contestants could weigh in at 170.9 and it would be okay. Standard rules have always been that you had to weigh in exactly at or under the contracted weight for a title fight.

Mike Chiappetta of MMA Fighting covered the shaky way the Quebec commission has attempted to handle the matter:

On Tuesday, a commission representative confirmed to MMA Fighting that "our regulation does not take decimals into account" and that those regulations "have been in place for several years."

A quick check shows that does not appear to be true.

You only have to go back a single year, to March 2012, to see that they certainly have announced decimals in some instances. At Ringside MMA 13, sanctioned by the same commission, main event fighters Paul Cheng and Eric Barrak were announced at 252.8 and 237.6, respectively, despite the fact that the decimals had no bearing on their making weight (the heavyweight limit is 265 pounds). The rest of the fighters on the card were announced the same way.

The year before that, a championship boxing match between Bernard Hopkins and Jean Pascal that was overseen by the same commission with the same rules that govern combat sports featured weigh-ins that also announced decimals. Interestingly in that fight, Hopkins weighed in at 175.9. The division's limit was 175, and instead of ditching the decimal, as they claim to do, the commission allowed Hopkins to cut more weight, which is against their own rules. He eventually checked in at 175 even. In that case, the rules seemed to play in Pascal's favor. Like St-Pierre, he happens to be a local star.

At UFC 158, every fighter's weight was announced as a round number. There were no decimals, no half-pounds, no fractions. What's interesting about that is that the commission's own regulations (Section XI, rule 74) mandate a calibrated scale graduated to 100 grams, making it extremely accurate to fractions. To be fair, the commission also announced only round numbers at the UFC's last event there, held in November 2012.

So, between the commission's statements appearing to not match up with their own regulations and past behavior, and the fact that a high ranking member of the UFC was video taped telling the Diaz camp this and stating that it was "off the record" -- something that a rule for a regulated contest can not be -- there is, at the very least, the appearance that something fishy was going on.

But one aspect of the story that has not been talked about much is what happened to the original video of the encounter between Mersch and the Diaz camp. If you go to the YouTube page for the video, you get the following: 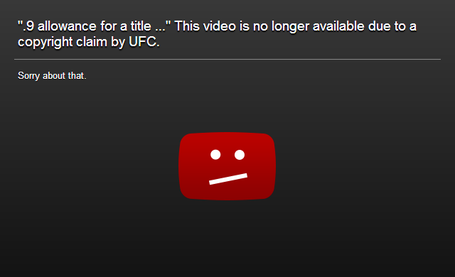 What is the UFC's claim that there was copyright infringement?

Interestingly, Mersch's job as Assistant General Counsel for the UFC has him as one of the biggest forces in the UFC's very aggressive copyright regulation. This means that he is one of the main players in the UFC's efforts to go after sites that illegally broadcast their shows and, in more questionable cases, after sites which use small amounts of video or gifs or screenshots that appear to fall under fair use.

Mersch's job means that he's more than well aware of the way that the Digital Millennium Copyright Act (DMCA) applies.

The DMCA was set up with provisions to attempt to make sure that you couldn't file notices to have material taken down falsely to attempt to suppress a story or any other action. From the act:

Penalties are provided for knowing material misrepresentations in either a notice or a counter notice. Any person who knowingly materially misrepresents that material is infringing, or that it was removed or blocked through mistake or misidentification, is liable for any resulting damages (including costs and attorneys’ fees) incurred by the alleged infringer, the copyright owner or its licensee, or the service provider. (Section 512(f)).

The original owner of the video would seem to have a clear cut case where he could file a counter notice and likely sue the UFC with success.

This has happened in many cases in the past, with two main examples often pointed to (via Aaron Kelly Law):

However, some people abuse the DMCA system. Despite not having a valid claim of copyright infringement, a person who wants content taken down may send a takedown notice anyway, in order to have material they find offensive, defamatory, or otherwise objectionable removed, or simply to harass the person responsible for the account which will be affected by the DMCA notice. What many who abuse the DMCA system do not realize is that they can be sued and held civilly liable for the havoc they wreak by sending these fake notices.

A perfect example of this is the case of Online Policy Group v. Diebold, Incorporated. Diebold made voting machines used in US elections. Online Policy Group was critical of Diebold’s machines, and released e-mail correspondence from the company that they had obtained onto the Internet. Diebold sent DMCA takedown requests to have access to the e-mails that Online Policy Group had posted online removed.

Online Policy Group sued Diebold over the takedown requests, arguing that the Group had the legal right to publish the e-mails. A California court agreed with the Group and granted a request for summary judgment, after which Diebold settled with the Group to pay $125,000 for their monetary losses and legal fees.

The case was just one of many which have been fought over unsubstantiated DMCA takedown requests. Another case was that of Michael Crook, a controversial public speaker who appeared on Fox News and was subsequently criticized on a website which used a thumbnail image of him on their site. Not only was a thumbnail image fair use, but since it was Fox that made the show, Crook could not even claim to be the owner of the broadcast. The case was settled and Crook agreed to a number of embarrassing conditions, including being required to take courses on copyright law, to never again file a Cease & Desist request regarding the image of him on Fox News, to publish a public apology, and other inconvenient conditions for him. He was not required to pay monetary damages because he was indigent.

In many cases, people are unaware that they can file counter claims and that these protections exist. In fact, if a company is hit with enough counter claims that are found legitimate, they can be prevented from filing future claims.

But, to the original point, there seems to be no way that the UFC had a legitimate DMCA claim on the video. Again, they can't hold copyright over a conversation in a public space and nothing on the video was material that they "own" the rights to.

And, while I can't say this was the intention behind their pulling of the video, it certainly gives the impression of an attempt to suppress a story that called their handling of a recent main event into question. The action could actually serve to make the use of Mersch saying the rules were "off the record" and the Quebec commission's own inconsistent statements appear even more questionable.

It will be interesting to see if the video owner follows through on filing a counter claim, or if they would rather stay out of the UFC's doghouse by letting it go.

Update: It looks like the counterclaim has been filed. Steven Marracco of MMA Junkie tweeted me that he was told the owner of the video had filed a counterclaim. We will provide more updates as they become available.