DJ Jackson, a top student at Team Lloyd Irvin, and one of the few to stay following the recent allegations, was charged with sexual abuse in the third degree in 2008. This story becomes public only days before Jackson is to compete in the black belt middleweight division at the Pan Ams.

Of the very few students left from Team Lloyd Irvin's former Medal Chasers team, DJ Jackson may be the most promising. He'll be competing in the upcoming Pan American Championships in the black belt middleweight division.

GracieMag recently ran a bit on Jackson in an article looking at Americans as they prepare for the tournament:

Amidst the situations at Team Lloyd Irvin and the fleeing of team members, DJ Jackson remains with his original team in Camp Springs, Md. The black belt middleweight has kept his loyalty along with black belt Nyjah Easton and newly promoted brown belt Sijara Eubanks. The team has many members who are lesser known but still provide training for the leftover medal chasers. DJ will still be attending the 2013 Pan Ams as a representative of Team Lloyd Irvin as he did in Boston where he won double gold after beating Abmar Barbosa, Gregor Gracie, Rafael Formiga and others.

DJ tells GracieMag.com what his training is like since most of his partners left:

"I train mostly with a purple belt named Greg Howell, Nyjah, Sarj and the teenagers who are coming up. I still train the same routine, the only difference is there are some different people and less JT and Keenan."

De’Alonzio Jerome Jackson started wrestling his freshman year of high school at DeMatha Catholic High School in Maryland before receiving a scholarship to wrestle at Northwestern College in Iowa where he still ranks eighth in most wins in a season and fifth in most takedowns in a season for his 07-08 season. He even spent some time ranked #8 in the nation in the NAIA in early '08.

Bloody Elbow was informed on Wednesday evening -- the story has subsequently been discussed on other blogs and forums -- that Jackson's 2008 also included a charge of sexual abuse in the third degree. Here's a screenshot of some of the details from the Iowa Courts website -- case: 03841 FECR012155 (SIOUX): 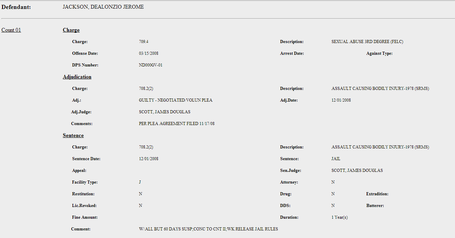 Here's how sexual abuse in the third degree is defined in the Iowa statute:

A person commits sexual abuse in the third degree when the person performs a sex act under any of the following circumstances:

2. The act is between persons who are not at the time cohabiting as husband and wife and if any of the following are true:

a. The other person is suffering from a mental defect or incapacity which precludes giving consent.

b. The other person is twelve or thirteen years of age.

c. The other person is fourteen or fifteen years of age and any of the following are true:

(1) The person is a member of the same household as the other person.

(2) The person is related to the other person by blood or affinity to the fourth degree.

(4) The person is four or more years older than the other person.

3. The act is performed while the other person is under the influence of a controlled substance, which may include but is not limited to flunitrazepam, and all of the following are true:

a. The controlled substance, which may include but is not limited to flunitrazepam, prevents the other person from consenting to the act.

b. The person performing the act knows or reasonably should have known that the other person was under the influence of the controlled substance, which may include but is not limited to flunitrazepam.

Sexual abuse in the third degree is a class "C" felony.

Jackson was able to plead down to assault causing bodily harm, a serious misdemeanor, and was sentenced on December 1, 2008 to one year in jail with all but 60 days suspended.

Related: Team Lloyd Irvin crippled by mass exodus of top students after yet another scandal

Also included in the case was a charge of supplying alcohol to a minor, to which which he also entered a plea of guilty and the sentences ran concurrent.

Given that there were no details on the charges, Bloody Elbow reached out to the Sioux County sheriff's department this afternoon who informed me that they require a written, mailed request to consider releasing details. That letter was sent on Thursday afternoon.

Bloody Elbow also contacted Jackson via a Facebook message at 9:52 p.m. ET on Wednesday night. Jackson responded that he would send a response quickly after being informed that I would give him until Friday morning in hopes of being able to provide his side of the story. Thirty-six hours have passed since our initial contact and Jackson has not yet provided any statement or details.

This story will be updated if any statement is provided by either Sioux County or Jackson.

For our complete coverage of the situation at Team Lloyd Irvin, check out our StoryStream

Update Jackson has 2 outstanding warrants in Sioux County for failure to appear. Both are related to FECR012155, which is the case number for the sexual abuse charges.