Braulio Estima, a world class BJJ black belt, claimed on Facebook he went to shake Nick Diaz's hand after his fight with Georges St. Pierre at UFC 158 and was greeted with a shove.

Share All sharing options for: UFC 158 Results: Braulio Estima claims on Facebook Nick Diaz shoved him when he tried to shake hands

Brazilian Jiu Jitsu world champion and George St. Pierre's training partner Braulio Estima apparently sought out Nick Diaz to congratulate him on a gutty performance in the main even of UFC 158. Estima had this to say on his Facebook account about how things went: 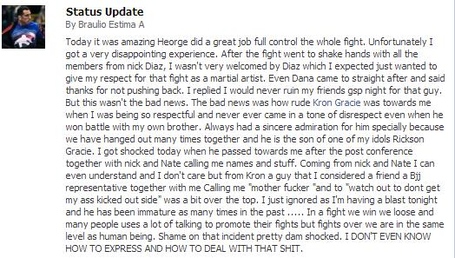 Some might remember Braulio Estima was the opponent Nick Diaz no-showed against at the World Jiu Jitsu Expo last spring, and Estima spoke out then about how disrespectful Nick acted in that situation also. It was suggested in this post that Diaz actually shoved Estima away when he tried to shake hands, but Estima, being a longtime friend of St. Pierre, didn't want to cause an incident.

What is also interesting is the role than Kron Gracie, son of Rickson, took in this situation. Most sport grappling fans are aware of some very intense matches that have taken place between Kron and Braulio's brother, Victor Estima. According to Braulio's version of events it appears Kron harbors some ill feelings against the Estima family.