UFC on Fuel TV: Diego Sanchez vs. Takanori Gomi Preview and the Prognostication

Two lightweights at the proverbial crossroads in their careers engage in what should either be a one-sided affair, or an extended war of attrition when Diego Sanchez meets Takanori Gomi for the first time.

Share All sharing options for: UFC on Fuel TV: Diego Sanchez vs. Takanori Gomi Preview and the Prognostication

In the lightweight corner of this weekend's UFC action, we've got a match that needs no introduction. I'd like to skip the usual prelude and explain the picture you see here: 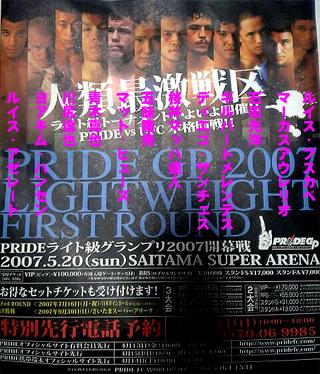 Back in 2007 Takanori Gomi had reached what many fans and observers argued was the top spot in the lightweight division. It was completely earned, and no one would have argued otherwise back then. The UFC had only recently reintroduced their LW division, and the guys who were primed to be their posterboys couldn't hack it in Pride's Bushido series (I'm being hyperbolic so forgive me for not recognizing that Yves Edwards probably deserved that decision over Joachim Hansen).

Two years earlier, anyone who was anyone at LW fought on what I consider to be 155's crowning achivement: Bushido 9. Gomi came out of that tournament on top. Gomi was simply one of many fighters the UFC was looking at to finally score a monopoly on the world's best MMA talent. Shortly after Zuffa's purchase of Pride Fighting Championship, we were teased with the above poster.

It's nothing special when you compare it to the old Pride posters (readers, please post your favorites in the comments section), but it gave us fans a delicious teaser for what could come: Diego Sanchez and Matt Hughes against Bushido's brightest?!?

It sounded awesome until none of it happened. Our appetizers were Marcus Aurelio vs. Clay Guida instead, with a side order of Joachim Hansen's comments about preferring bleeding hemorrhoids than signing with the UFC. It all sucked, but we forgot about these bouts because hey...at least we had Wand, Rampage, and CroCop.

So now we finally get one of the fights from that poster, and not only have some of us forgotten how fun but also annoying it was to talk "Pride vs. UFC", but the fight itself is between two lightweights on the bubble for drastically different reasons.

It's hard to tell where Gomi has gone wrong. It started with a complete robbery to Sergei Golyaev (par for the course when you consider Sengoku's infamous judging/reffing) and then just snowballed from there. Sanchez is the dark matter to Gomi's atom. Diego is on the bubble not for being comically indifferent, but for being comically consumed.

He losses because he tries to do way too much at any given moment. Brawling with Jake Ellenberger, who hits too hard even for people two weightclasses above him, is a terrible strategy, but Diego probably thought it sounded good in his head at the time. What will the hadron collider we call the octagon produce between these two opposite souls?

What both men can do: Gomi's talent has always been his boxing. He reminds me a lot of Chuck Liddell not in terms of technique, but in terms of how they find openings. Gomi has a great chin, or used to, and therefore leaves himself open in order to land heavy shots to the body, and head. I don't know if he's naturally right handed, but he uses it to great effect from his southpaw stance. Similar to Penn, he never deviates from his boxing, rarely opting for kicks in order to deal more efficiently with defending the takedown.

This will serve him well against Sanchez, who has workmanlike takedowns, and no natural spring in his doubles. Gomi is shockingly on a two-fight win streak, so it's possible he'll fight with purpose.

I'm at a loss to identify what Diego is actually good at. I don't mean that in a disparaging way, I don't think, but Sanchez is at his best when he just empties his head full of noodles, allows strategy to become a four letter word in a foreign language he doesn't understand, and just moves forward like a politician with a continuing resolution dangling in front of his drooling face.

Obviously, his grappling is quite good, and any rewatch of his battle with Nick Diaz proves as much; a fight in which I'd argue Nick wasn't just outwrestled, but yes, outgrappled. Likely not a popular sentiment among Diaz fans, but a closer approximation to the truth than Nick's "fight me, don't wrestle me" mantra.

His striking isn't polished by any stretch, but like everything else in Diego's game, persistence pays off. If attempt the takedown long enough, it'll come. If you throw enough punches at your opponent, they'll land. It's this logic that makes Sanchez an exciting, if eccentric fighter to watch.

What both men can't do: I can't stress the physics analogies enough. I'd consider both fighters well rounded, but they both suck at things they're completely capable of. Diego has a very solid, very strong left kick. He can also throw in combination. But his lack of defense hurts him on the feet, in addition to the lack of any real pattern. He basically got outjabbed against Josh Koscheck, despite putting Martin Kampmann through the ringer (and no I don't think he earned that decision, but Martin didn't exactly walk away unscathed).

Gomi actually has good wrestling (!). In fact, it's how his Shooto reputation started. You can find plenty of good footage of his Combat Wrestling days revealing Josh Barnett-level potential:

Gomi's problem is that he just straight panics on the ground. He absolutely never makes a wise move when trying to escape a problematic position.

Despite his two fight winning streak I don't think Gomi has looked great. Diego has a sturdy chin, so he should handle Gomi's "onslaught", assuming he's even able to pretend one.

Honestly I don't even know what to expect. I think this fight is incredibly obvious on paper: Diego's chin will stand up to Gomi's deteriorated offense, get the takedown, and then submit him. But I have one of those 2007 feelings...where up is down, black is white, and Gabriel Gonzaga better imitates the role of kickboxer than Mirko Filopovic. Will Gomi finally care on the same day Diego forgets what a takedown is?