Alistair Overeem's knockout loss to Bigfoot Silva highlighted the importance of discipline in striking. Even the best strikers in the world can be knocked out when they behave foolishly. We take a look at how Overeem threw away the fight.

Forget what you have heard about combat sports being about passion and durability - it's wrong. Fighting is a game of smoke and mirrors, and an entire bout should be spent lying to an opponent and hurting him when he believes you. Trickery lands strikes, not fast hands or granite chins.

I want to take a few moments to talk about something which I often mention off-hand but is truly the difference between knowing the game and being great at it. A fighter is more than an individual, on the biggest stages in combat sports he is an expression of his coaches' and team's gameplan, training methods and strategy. It is, of course, one person against another person once the cage door swings shut and the seconds are out, but there is a whole team of people working with a stake in that fighter's success. That being said, a fighter is anything but a good medium for a team's strategy and ideas - because they are an individual and they suffer from all of the faults that come with this. The single feature that dictates the quality of the paintbrush which is drawing out the team's strategy on the ring canvas is discipline.

Discipline is the true commodity in the fight world: a few years training under a knowledgeable coach can teach any smart man a good degree of striking science, but almost always it is thrown away in the ring when their discipline fades. Every attacking effort should start with a good, safe initiator (turning the opponent with footwork, a good stiff jab and some anticipatory head movement, a hand trap), and culminate with an exit off of the original line of engagement or a clinch. This is the basic pattern of offense. If a fighter does this he will be very hard to hit while entering or exiting and ultimately dictate those exchanges. Unfortunately it is near impossible to do this constantly for one three minute round, let alone three five minute rounds. One of the reasons that the great Manny Pacquiao has been so successful is that he is constantly taking angles and moving his head when other men would have tired of doing it.

A thousand things can cause a fighter to lose discipline - to stop exiting after his strikes or to let his guard down - the most common is tiredness, which is why cardio is so important in a fighter. Perhaps the most frightening for a coach, however, is overconfidence. Alistair Overeem's career has been a highlight reel of getting ahead and letting his opponent win, but his bout with Antonio Silva might have been the worst instance to date. Overeem didn't seem to tire all that much, but his continuing to make foolish tactical decisions got him knocked out against an opponent with next to no striking science of his own.

From the opening round Overeem was overconfident in his striking ability. Overeem has never been a good boxer - he's a clinch fighter with a heavy counter punch and some crafty set ups - but against Bigfoot he was all for pretending he had the division's best boxing. Every time Overeem threw his classic overhand (rarely as well timed as against Ben Edwards or Tyrone Spong) he dropped his left hand down to his thigh, exposing the entire right side of his jaw to strikes.

This was the major flaw evident from the start of Overeem's performance - he attempted everything naked, without a guard in place. Even the best strikers in the world make mistakes and misjudge distance or timing, guards are there to prevent these mistakes from altering fights. Lets take a look at the shoulder roll to counter right uppercut which Overeem completed in the first round.

Look pretty good? Lets see it from another angle.

Bigfoot's right hand comes within centimeters of Overeem's chin. Against any fighter actually adept in shoulder rolling the punch should have hit the left shoulder which should be pressed to the left side of the jaw. Instead Overeem was looking away from the punch and had no guard in place if this did go wrong. The shoulder roll is primarily an evasion but it is a hybrid technique - the shoulder stays in front of the jaw to bounce off any strikes that chase the fighter. Shoulder rolling is done against powerful blows, attempting to evade a 270lbs man's right straight through leaning back alone is a terrible, terrible idea. Take a look at how James Toney's lead shoulder follows his chin across his body.

The art of James Toney (via fergusmc69)

Bigfoot has struggled against speedy, lighter fighters in the past. Opponents who won't show him where their punches are coming from and will put them together as Cormier did. Mike Kyle was able to drop him while the great Fedor Emelianenko couldn't. The difference was that Fedor at this point was leading every attack with an overhand right - rather than the brilliant variety of his prime - while Mike Kyle caught Bigfoot completely off guard. As Overeem swung in his right hand every time, all Bigfoot had to do was survive it and fire back. Because Overeem always left himself exposed after swinging Bigfoot began to have some success very early in the second round. 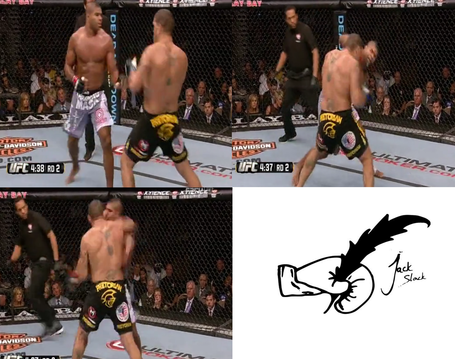 Here Overeem attacks with a right hook but leaves his left side exposed, Bigfoot comes back and connects a right hand of his own on Alistair's exposed jawline.

Something which Overeem had also been doing throughout the fight was ducking without any kind of a guard.

By the second round Bigfoot was also attempting to capitalize on this - throwing uppercuts when he saw Overeem's head come down.

The first truly telling blow that Bigfoot landed came at the end of the second round as Alistair threw a wild right uppercut, exposing the left side of his jaw again and Bigfoot came back with one of his own.

The third round began with a clash of heads and a charge to the fence. When Bigfoot broke free Overeem tried to re-engage and ate a stiff jab and an uppercut for his trouble.

Overeem covered against Bigfoot's flurry well but in his hurt state it was his naked slipping which really lost him the fight. As Bigfoot closed on him Overeem attempted the same duck that he had been using throughout the fight, with his hands dangling by his knees. This is when Bigfoot followed him with a monstrous right straight. From here Bigfoot flurried for the finish - this is one of the worst possible times to get hit. Overeem was looking down, had no guard in place to deflect some of the force of the blow, and no means to counter.

Most of us suspected that this was Overeem's fight to throw away and he very much did. Overeem has the best stepping knees in the business, hard counter punches, hard kicks, and a brutal clinch game. Bigfoot has a big punch but little skill on the feet, and a devastating top game but extremely lackluster takedowns. The only way Bigfoot was going to win this fight was if he could get Overeem on his back or if Overeem allowed him to best utilize his puncher's chance.

The truly sad part of this whole affair is that it is not the first time Overeem has lost his discipline and thrown away a fight. One only needs to look back to his bout with Sergei Khartianov to see the exact same thing happen. Overeem confounded the hard punching Russian with his tricky style - throwing hard knees and lunging punches from different stances - then as he began to tire he began to get lazy and was brutally knocked out while jogging away from Sergei. Kharitanov is no great boxer or striker - he simply has an iron jaw and a powerful right hand - but Alistair gave him the fight.

I'm sure the debate is already raging over whether or not Alistair Overeem has a glass jaw - but in truth anyone who allows a giant like Bigfoot Silva to hit them square in the face without any kind of guard is going to be wobbled by it. The problem is not one of Overeem not being able to take punches, it is of Overeem putting himself into position where he will undoubtedly eat them.

Learn the techniques and strategies of effective striking in Jack Slack's ebook:Elementary Striking.