With one of the more unique submissions seen in the UFC, Kenny Robertson defeated Brock Jardine with a modified kneebar on the UFC 157 Facebook prelims. A little over 10 years earlier however, this same submission won a fight on a much smaller stage.

Before heading into UFC 157, most probably assumed the Submission of the Night was a lock for the Queen of Armbars 'Rowdy' Ronda Rousey, and few would expect it to go to a Facebook preliminary fighter, as traditionally these 'of the night' bonuses elude the lower profile fighters.

Fortunately for Kenny Robertson, his submission was unique enough for fans to already consider it a 'Submission of the Year' contender. Talking to Ariel Helwani backstage, Robertson explained the origin of the move.

"I kind of made it up in college when I was wrestling, unfortunately I tore a kid's hamstring in half doing it. But I learned ... I converted it over to submissions and it worked really well. All it is is when people try to get the hooks out, they tripod up and try to shake you off, you just reach down (and) lift that heel right up."

Without getting into too much of an editorial on the reality of inventing a technique that hasn't been done before, all I'll say is, for as long as humans have been competitively grappling the likelihood of creating something new is incredibly small. As Coach Billy Robinson likes to say, moves aren't invented, they've just been forgotten and rediscovered.

Even in MMA, Robertson's unique looking submission has actually been pulled off just over 10 years prior, at the 2 Hot 2 Handle 5 event back in 2002 in a fight between Amar Suloev and Paul Cahoon in Rotterdam, Holland.

Suloev is an Armenian fighter and an early MMA combatant that trained out of the Russian 'Red Devil' Sports Club' fight team, which would later become the home for Heavyweight great Fedor Emelianenko . Suloev actually features in one of the earliest MMA documentaries 'Rites of Passage' where he wins the limited-rules bare knuckle WVC 11 World Vale Tudo Championship tournament in Brazil that the documentary covers. A natural middleweight, Suloev got a chance to fight Chuck Liddell at UFC 35 and was one of the few to take Liddell to a decision, as his kickboxing was competitive with that of Liddell's. Although he lost, he got another chance to fight in the UFC against Phil Baroni, where after an illegal knee to the head of Baroni, the New York Badass capitalised on a referee stand up and blitzed Suloev with a barrage of punches leading to a TKO stoppage. Suloev spent the rest of his career fighting in Europe and Japan mostly for M-1 and Pride Bushido.

In addition to being a competent kickboxer, his Armenian roots and Red Devil training lead to skills in Wrestling and Sambo. Depending on which site you read his record on, the submission he scored on Cahoon has been called anything from a Hip Lock to a Thigh Slicer, but in tribute to this little known fighter, I've decided to call it The Suloev Stretch.

Similar to Robertson vs Jardine, Suloev is on the back of Cahoon who attempts to tripod up and escape the position. Suloev is high up and in danger of being bucked off, but takes his opportunity to pick the heel of Cahoon's right squatting leg while keeping both his legs hooked in from the back. Suloev extends the leg and stretches the hamstring and groin until enough muscle tears for Cahoon to submit.

This is particularly effective given the mechanics of the body when it is compressed and contorted like this, and is actually the optimal way to kneebar someone. As your leg is brought nearer to your body, your hamstring naturally tightens depending on its flexibility. Traditional Kneebars can often fail when an attempt is made to hyper extend the leg when the opponent is in an otherwise natural and comfortable position, greater success is found if you fall back directly onto your opponent with the leg locked up because of how it affects the hamstring.

Here we see Robertson executing the Suloev Stretch almost identically, only Jardine taps at a point before Cahoon does, possibly due to pain tolerance and / or differences in flexibility. 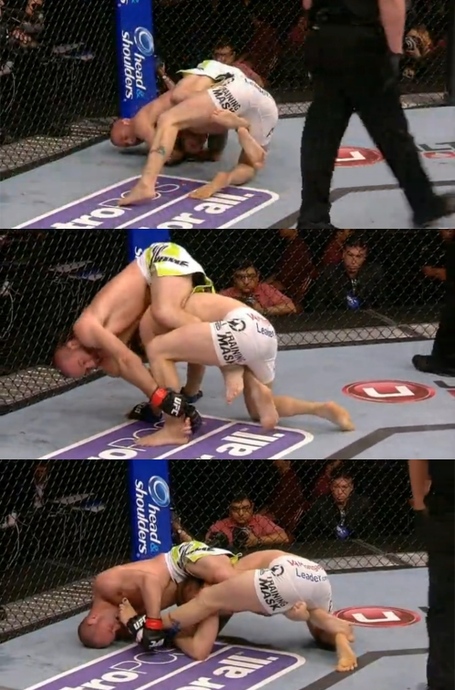