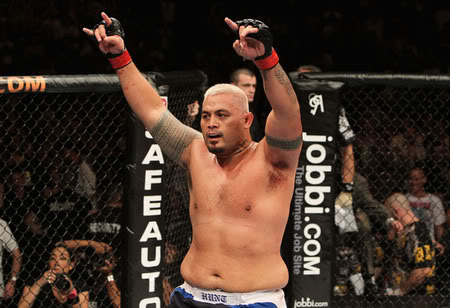 So while reading through the UFC 160 Heavyweight fight comment section I noticed a genius comment by one RobtWeaver that explained how the #RallyForMarkHunt had seemingly woke up a sleeping giant:

I saw a re-energized Mark Hunt...until the knee injury

It was so awesome, seeing Mark realize he had fans, and the effect that had on him. He had slimmed down, was looking leaner and meaner than he ever had, and I was really thinking we were going to see Mark Hunt like no one in MMA had seen him…and then his knee.

So, what I’m thinking is, the Army of Doom needs to warm the Twitter engines back up, and pump Mark up about this fight with Struve, keep encouraging him, and see if we can’t turn this man into a monster.

All the hype back in the Rally days really did sway me…I watched all those fights, saw that Hunt had more in him than just a big punch, saw him working that kimura on Fedor, and I believed. If Pat Barry can improve his ground game, why can’t Mark Hunt, who thought no one was watching him fight anyway? I think if the Army of Doom had been there before the McCorkle fight, that sub would not have happened.

I’ve been really good this year, and I’m writing another letter to Santa. I like Stefan Struve, I really do, but I gotta root for Mark Hunt in this fight, because I want to see magic happen in the HW division.

I wholeheartedly agree. Mark Hunt has been damn near magical as of late and I think it is time to get the magic fired up again and help power Mark Hunt to a #1 Contender's fight by giving him the power and fury to beat Stefan Struve. I like Struve a lot, but he is merely a casualty in this scenario. A wrong place at the wrong time kind of situation

Therefore, I implore all of you to get on the Twitters and propel Mark Hunt to victory. His Twitter handle is @MarkHunt1974 and be sure to use #RallyForMarkHunt and #armyofdoom.

Make it happen boys (and by my count, 3 or 4 girls). Let's make the Super Samoan proud.