It is time for the finals of the BE's Baddest Greatest of All Time Tournament. Who is MMA's GOAT - Fedor Emelianenko or Anderson Silva? Vote now!

It all comes down to this. After 30 fights and weeks of battles, we are left with two men standing. And after this match-up there will be only one - the Greatest MMA Fighter of All Time. Let's look at our finalists:

FEDOR EMELIANENKO (35-4(1)) - This #1 seed comes in with a powerful record and only 4 pro losses, though 1 of those losses is highly questionable, and the other 3 came in rapid succession in the twilight of his career. For years, this Pride champion was easily considered MMA's GOAT. Now, there are a huge number of fans that have never seen him in his prime, and know him more for the legend. And that legend, while great, also has its very vociferous detractors who claim that his record is padded. But wins over Big Nog, Cro Cop, Randleman, Coleman, Hunt, Arlovski, and Sylvia - all at a time when those wins absolutely meant something - this is an impressive resume. Impressive enough to make this old school fighter still the GOAT in our current era? Fedor gets here after wins in our tournament over Renan Barao, Randy Couture, Wanderlei Silva, and Georges St. Pierre, who gave The Last Emperor a tough run in the semifinals.

ANDERSON SILVA (33-6) - It's only fitting that two days after what may very well end up being the Spider's final MMA fight, we discuss his place in the history books. There's no questioning his accomplishments in the UFC. A record number of consecutive wins (16); a record number of title defenses (10); the longest title run in UFC history (just under 7 years). It will be hard for anyone to topple these records anytime soon. He also has an absolutely incredible highlight reel, maybe the best in the sport's history. Big wins include Vitor Belfort, Dan Henderson, Chael Sonnen, and Forrest Griffin. But again, there are demerits. Silva had a weird run of lackluster title fights some years back, an oddly unimpressive run in Pride, and the back to back losses to Chris Weidman, which will be fresh in fans' minds. Some also question just how tough the UFC Middleweight division truly was. So is it enough to take down Fedor? Silva comes to the finals here having had absolutely no trouble with Jon Fitch, Frank Shamrock, Matt Hughes, and Jose Aldo.

In order to vote, simply leave a comment. In the subject line make sure you follow these guidelines:

Voting is extended for this final and will be open for 48 hours, so get your votes in now. For the last time I ask - who will be the GOAT? 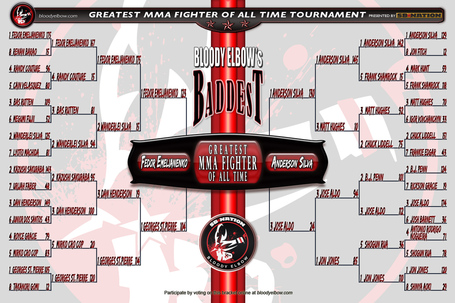 Thanks to June M. Williams for the tournament bracket graphic.