Share All sharing options for: Judo Chop: The Strategy of Anderson Silva

Most agreed that, were Chris Weidman to defeat Anderson Silva at UFC 162, it would have been on the ground, via his potent combination of world class BJJ and wrestling. Silva was the consensus greatest striker in the entire sport at the time, and more or less still is. Regardless, we were all wrong-all of us except perhaps Ray Longo and Chris Weidman himself-because the Long Island native separated Anderson from consciousness for the first time in his 38-fight career with a beautiful left hook and a brutal right hand on the ground.

To put it lightly, fans' emotions after the fight... ran high. "Anderson didn't take Weidman seriously," we heard, echoing the sentiment that Joe Rogan expressed as Weidman took the unattainable middleweight belt back to the dressing room. It seems like it took a few days before the first person actually came out and said, "Hey... Maybe Chris Weidman is a better striker than we thought? And maybe Anderson did take him seriously, but approached him with the wrong strategy?"

Well that's exactly the sentiment I'm taking into the rematch between these two men, as Anderson Silva-and it still feels strange saying this-challenges UFC champion Chris Weidman for his belt.

For every time that Anderson has ever underperformed-against Leites, Maia, and yes, Weidman-he has done so with such brash confidence that his actions have been dismissed as unserious behavior. "If only Anderson had taken him lightly," we said after the Maia fight, "Then we might have seen another spectacular win." Only this time, Anderson's supposed carelessness got him KO'd. Many felt that Anderson's taunting had gotten seriously out of hand.

This is a flawed way of thinking. Taunting is not something Anderson does for lack of caring, but rather for lack of opportunities.

Let's take a look at Anderson's previous fights and, for the moment, ignore his finishes, looking only at the antics before the fights' ends. Anderson didn't do much to mock his first eight UFC opponents, which at first might lead one to believe that the taunting was something he picked up as he became bored later in his career, but really looking at those first eight fights helps us to understand a bit better. Chris Leben, Rich Franklin (x2), Travis Lutter, Nate Marquardt, Dan Henderson, James Irvin, and Patrick Cote might not have much in common, but they are all men who do not need to be convinced to come forward-they will all do that on their own; why mock them?

It was only after Cote that we started to see opponents truly afraid of pressing forward against the Spider, and that's when we started to see Anderson's clowning, always a part of his arsenal, come to the forefront. Thales Leites and Forrest Griffin were both victims of Anderson's mockery. Leites, timid to the final bell, merely lost a decision; Griffin responded to the condescension by charging forward blindly into counter after counter until he simply couldn't anymore. Anderson taunted Demian Maia so viciously that he gassed out in the process and arguably lost the last two rounds. Then came Sonnen, and Vitor, and we all forgot about Anderson the clown again.

In Chris Weidman, Anderson was confronted by a strange new breed of challenger. This was no Chris Leben, who would swing wide and often until either he or his opponent fell; nor was this a Demian Maia, who would refuse outright to come forward, choosing instead to circle endlessly and desperately on the end of Anderson's punches; nor even was this a Yushin Okami, who would throw predictable single jabs, ripe for counter shots. Weidman was a different beast entirely: a strong, skilled wrestler with prodigal submission skills and a clever-footed boxer with powerful hands. Where Chael Sonnen and Demian Maia were desperate for takedowns, Weidman was happy to fight wherever the fight took place. Where Forrest Griffin charged chin-first and feet-last into Anderson's counters, Weidman stayed composed and worked his way in behind a stiff double jab.

Okay, maybe I'm getting a little poetic here, and this is certainly a bit long for an introduction-but the point is that Anderson Silva took Chris Weidman seriously and just didn't quite understand what he was up against. And regardless of how seriously he took the challenger in the first fight, he must surely be preparing for Chris Weidman the champion with even more respect.

So if we are indeed in store for a-if not serious, then "different" Anderson Silva than the one we saw at UFC 162, what changes can we expect to see? I have a few in mind...

This is what I see as Anderson's greatest mistake against Weidman the first time out. The former champ was far too content to defend, defend, defend, without ever giving Chris a reason to stop punching and step back. 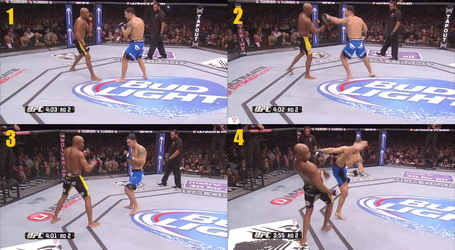 1. Anderson backs up, trying to preserve the distance between himself and Weidman using his feet, trying to distract the challenger with his hands.

2. Weidman hop-steps in with, unbeknownst to Anderson, one of his best weapons, a long left hook. He moves, not only forward, but diagonally to his left, attempting to line Anderson up for his right hand.

3. Stepping back from the hook, Anderson moves to his right, away from Weidman's right hand.

4. Weidman attempts to time Anderson's constant swaying with a right high kick, which the Spider dodges. Next Anderson steps back and circles out of range again.

This all looks pretty good (and that's exactly why many viewers were convinced of Anderson's imminent victory during the stand-up portions of the fight), but in reality Anderson is accomplishing nothing. Weidman is not so weak-willed a competitor that a few misses will destroy his confidence. Rather, he attacked Anderson with even more gusto just moments later. 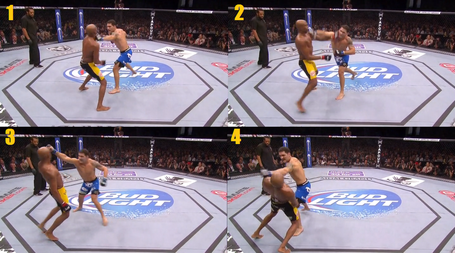 1. Weidman connects with the same long left hook that he attempted before. Anderson dismissively pretends to be hurt.

2. Anderson thinks about throwing a sort of up-jab with his left hand, but there's no effort behind it, and he's not in the right position. Instead, he is forced to adjust to avoid Chris' straight right.

3. Weidman follows up with his now-famous right backfist.

4. Anderson, now lacking anything resembling a solid stance, weaves back to his right, leaning back past his own feet, and Weidman lands that left hook once more, shutting Anderson's lights off.

The problem with these two sequences is Anderson's passivity. One half-attempted jab from a squared position is not enough to dissuade a determined challenger from closing the distance, and no amount of baiting and mockery will convince a disciplined fighter with experienced coaches to swing wild. Weidman fought a game of inches, and Anderson just kept waiting for him to get frustrated enough to miss by feet.

This is, and probably always has been, Anderson's greatest flaw as a counter striker: he is obsessed with finding "the perfect counter," and he's more than happy to wait for it. But that just doesn't fly against a burgeoning pressure fighter like Weidman; that approach is just too passive. To quote the words of BE's own Fraser Coffeen, "there's only so long you can evade before you need to either fire back or get out of there, and Silva did neither."

Rather, Anderson needs to approach this fight with a different mentality than he's ever had before. Instead of entering the Octagon with a gameplan consisting of "I'll finish him later," he needs to take what few opportunities Weidman gives him. The Spider's vicious right jab would serve him well in this pursuit, and he would be wise to make it a consistent weapon in the rematch, instead of abandoning it after half a round as he did the first time around.

When the dust finally settled after UFC 162, we all came to one stunning conclusion. Anderson only did one thing really well against Weidman, and lost nearly every other facet of the fight. Worrying a thought as that may be for the former champ, he does need to latch on to that one successful technique and work it into his strategy for fight number two.

I am talking, of course, about the leg kicks. While Weidman was finding his distance and trying to get a read on him, Anderson repeatedly battered the Long Islander's thighs and calves with hard kicks, laying his shins across the other man's legs and forcing him to either brace himself, thwarting his forward movement, or receive the kick, throwing him off balance. Anderson has used his kicks in this fashion before, most notably against Patrick Cote at UFC 90.

1. Anderson and Cote square off.

2. Anderson throws a quick left kick which Cote tries to check but fails to.

3. Now, having thrown his left leg, Anderson leaves it forward and circles in an orthodox stance.

4. Cote feints a jab and drops his weight onto his left leg. Anderson counters by chopping his shin into the side of that leg as it comes forward.

5. Cote tries to grab the kicking leg for a takedown, but Anderson's infamous lowered guard comes into play, and he is quickly and easily able to place his forearms at the level of Cote's shoulders.

6. After that it only takes a small sprawling movement to put Cote into Anderson's double collar tie, stopping him in his tracks and forcing him to disengage or eat a knee.

Observe the leg kicks of Kyokushin black belt Hajime Kazumi (thanks to Sherdog poster Azam for these GIFs).

Here, Kazumi stops an opponent from moving to an outside angle with a hard inside leg kick. Anderson's style of kicking is well suited to this application, as he tends to throw very straight kicks (sometimes called "cut kicks") straight from the floor, rather than bringing the knee up and turning the hip over. This lends his kicks the speed and trajectory necessary to work as counters to Weidman's excellent footwork.

Here we have another, similar application. This time, Kazumi uses his first kick in a similar fashion to the GIF above, but the opponent looks to follow up with another. So Kazumi, comfortable kicking from either stance (just like Anderson) simply steps to the outside and throws a right kick to his opponent's other leg.

These two suggested approaches need to be combined to be truly effective. As you see with Hajime Kazumi above, the application is just as important as the weapon itself. Anderson needs not only the timing that has served him well in so many fights before, but the willingness to throw that he has sometimes lacked. Chris Weidman has proven that he is not a fighter to be drawn into the frenzy of wild, uncalculated punches that have allowed Anderson to land perfect counters in the past. In fact, it's plausible that he will come into this fight with more techniques, a refined strategy, and fewer butterflies than before.

With that in mind, Anderson Silva will need to approach Weidman strategically. Rather than waiting for the perfect one-shot KO, he needs to throw whenever he has opportunity to do so, using his quick, snapping kicks to disrupt Chris Weidman's formidable base and stall his movement. Then, and only then, will Chris Weidman make the mistakes that Anderson needs to land the fatal blow.