UFC 168 Judo Chop: Ronda Rousey's Kesa Gatame and Giving up the Back

T.P. Grant takes a look at a piece of Ronda's game that is a judo specialty, how she uses it, and how it can lead to her giving up her back.

Share All sharing options for: UFC 168 Judo Chop: Ronda Rousey's Kesa Gatame and Giving up the Back

Before Ronda Rousey was ever the UFC Women's Bantamweight champion or even the Strikeforce women's Bantamweight champion she was one of the very best American judokas. In 2008 in Beijing, Rousey became the first American woman ever to medal in judo at the Olympic Games.
There have been scant few elite judoka to enter into Mixed Martial Arts, and because of that, Rousey makes use of some positions and techniques that are present in other grappling arts, but not frequently applied in MMA. One such position is the Kesa Gatame side control position, a pinning position used in Judo, Wrestling, and Sambo. 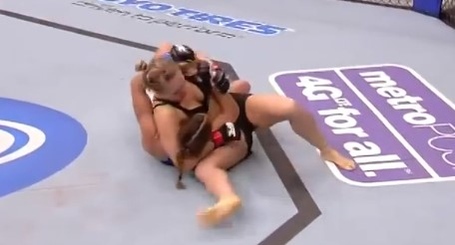 Pictured above is Rousey using the Kesa Gatame pin against Liz Carmouche in her UFC debut. The position is an extremely strong one when done correctly. While there a many variations, this is the most basic Kesa Gatame, which translates as "Scarf Hold".
Rather being in the chest-to-chest position typical of most side controls, Rousey must sit through and rest her right leg next to Carmouche's head to achieve the Kes Gatame. From here, Rousey's core is resting against the side of Carmouche's ribs, and Rousey is pushing off her left leg, putting her weight down on Carmouche's ribs.
Rousey's right arm has dived under Carmouche's head, lifting it off the cage floor. This, combined with Rousey's right leg being straight out by the top of Carmouche's head, almost completely takes away Carmouche's ability to bridge. The only option left to Carmouche is to try to turn into Rousey, but Ronda is using her arm to pull up on Carmouche's right arm. Rousey is using the arm as a lever that prevents Carmouche from turning; keeping her flat on her back.
For a more detailed look at the position here is 2008 Olympic judoka Matt D'Aquino:

Now keep in mind that the picture of Rousey is a snapshot and that when you watch the action live you can see her making the small adjustments to help control Carmouche.
But what to do with that control? Unlike Sambo, Judo, or Wrestling, MMA does not reward pinning. So what does Rousey seek to accomplish with this technique?
Ronda will use it as a finish to passing guard to secure her position or finish in the position after a throw. She did this against Meisha Tate in their first fight. Ronda will also use it to control so she can strike to the face or make a move to the mounted position.
The Kesa Gatame can also be used to submit opponents. Against Carmouche, Rousey was attempting to set up an armlock from this position. While that may not come as a huge surprise, it was the not the traditional armbar that she favors; rather she was attempting to set up a bent arm lock. Rousey struck much more in the Carmouche fight than she had in the past. You can see her trying to bait Carmouche into bringing her right arm away from her body, so she could set up the Ude Garami, translated as bent armlock and known to most MMA fans as the Americana, with the legs.

Above is a gif of Ikuhisa Minowa using the Kesa Gatame to attack an Ude Garami against Baru Harn at Dream 17. You can see Minowa force Harn's right arm down to be entangled in his legs. Minowa hooks his left knee over Harn's wrist and then crosses his legs, kicking them back. At the same time, Minowa pulls up on Harn's head, putting immense pressure on Harn's shoulder. If Harn does not tap, his shoulder will begin to tear.

In the first thirty seconds or so of her first UFC title match, Rousey came very close to pulling this off against Carmouche. 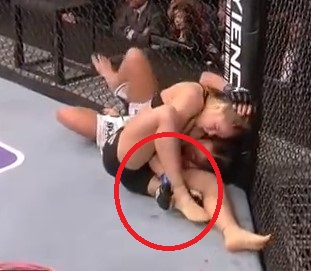 After a takedown, Rousey lands in Kesa Gatame and kicks her right leg over Carmouche's wrist, setting up the Ude Garami. The problem, however is that they are against the cage and Carmouche is on her side. She's not fully pinned in the Kesa Gatame. This allows her to pull her arm of out of the submission and leaves Ronda with just control of the head.

At that point, Ronda is left with a simple head lock. Once Carmouche is able to slip her head free, the path to Ronda's back is wide open. As you can see here, Carmouche rolls up, frees her arm, and is able to take Rousey's back.

Fans talk quite a bit of how Ronda gives up her back, but it has only happened twice in her MMA career: once in a scramble off a sweep of Meisha Tate and this time from Kesa Gatame. The problem with the traditional Kesa Gatame is the grip on the near side arm. It is vital to protect the back. In judo, you can grip the gi to help control the arm, but not in MMA.

If Ronda is concerned about Tate getting on her back, look for her to make greater use of the Kuzure Kesa Gatame where, instead of grabbing the head, Rousey would underhook the far arm preventing any back take. The position has become very popular in sport jiu jitsu. It provides good control and ability to transition between side control positions and still allows for submission attacks. It doesn't put down the same amount of horrific pressure and doesn't fully take away the bridge.

It is an excellent arrow in the quiver for Rousey and as it has been ingrained into her since her childhood, it has served her very well in MMA thus far. It also gave Meisha Tate fits in their first fight.

Ronda Rousey Armbars The Heck Out of Miesha Tate

Ronda Breaks Sarah's Defenses Down To Get The Armbar