The UFC.com website is reflecting that the "one event only" price hike for UFC 168 is permanent.

UFC fans were slightly surprised when the announcement came that UFC 168 would get a small price hike to $59.95 for the high definition PPV ($49.95 for SD). Given that the price hadn't budged on UFC prices in many years, it did seem like something that was going to happen sooner or later.

Where the mild bit of controversy came in was this interview from 2009, where UFC president Dana White promised that the UFC would never increase their price:

After the predictable mix of mild outrage and simple questioning over the decision making process for raising the price, White offered some insight and said that it was a one-time only situation (via MMA Fighting):

White said that he wasn't part of the decision-making process, and that it was Zuffa CEO Lorenzo Feritta who made the call. With the Chris Weidman vs. Anderson Silva middleweight title rematch and the Ronda Rousey vs. Miesha Tate women's bantamweight title rematch coming off The Ultimate Fighter (TUF), on paper, this is the strongest show of the year. White has at various times predicted this show will break all company pay-per-view records.

White noted that the price will go back to $44.95 and $54.95 for the Feb. 1 show in Newark,N.J., which will remain the regular price. A big surprise, given the high-profile nature of the main event, is that UFC is not doing a three-week Primetime series. "It's on hiatus," White said, noting at this point there are no plans to do the shows for the time being.

Okay, a one time bump for what White had been arguing was destined to be the biggest drawing show in UFC history makes a little more sense. And it's a smart way to game the system a little bit as well, similar to how the Floyd Mayweather/Canelo Alvarez PPV had a price bump that pretty much ensured it would finish up as the biggest boxing event in history in terms of PPV revenue.

But, at least according to the UFC website, it now looks much less like the one time only situation it was sold as with both UFC 169 and 170 showing the $59.95 price point: 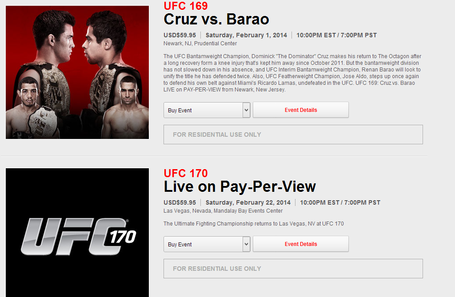 Where you could hit issues is if very loyal fans, who feel like the UFC and White have been more open and honest with them than other sports league/fight promotion figureheads, start to build up a sense of distrust. And being told that prices will never go up, and then they do. And then being told it's one event only, but then it appears to be sticking around. That could be an issue for some people.

But it's also entirely possible that it's a mistake and the prices simply weren't updated. But right now, that's the price you'd pay for all the events you can order from UFC.