The Philippines' longest running MMA promotion hosted another major event this past weekend with URCC 24: Uprising. Headlining the event was Eric Kelly who made a successful return as he quickly submitted Chinese prospect Jianbo Lu. After a brief exchange standing, Kelly was able to catch a kick from the Xian Sports University product to secure a nifty takedown that went straight to mount. Moments later, the Filipino got an armbar and tapped the Chinese kickboxing champ and BJJ blue belt to the delight of his hometown crowd.

With the victory, Kelly improves his record to 10-1, making a triumphant comeback since suffering the first loss of his career during an injury riddled bout against Honorio Banario last February.

Co-headlining the night was a rare quality heavyweight match up in Asia, as the massive sambo-based fighter Igor Subora was able to knock out the former champ Marcus Valda to defend his URCC strap. The SEA Games medalist and BJJ brown belt game out really aggressive as he tried to push the pace, but the Philippine-based Ukrainian stood his ground until he had an onslaught that started from a stiff jab that dropped Valda. After a few more hard shots, and he left the Filipino out on the mat for his first defense of his title. The victory marks Igor's 5th straight win since losing his MMA debut to former champ Pete Brooks. 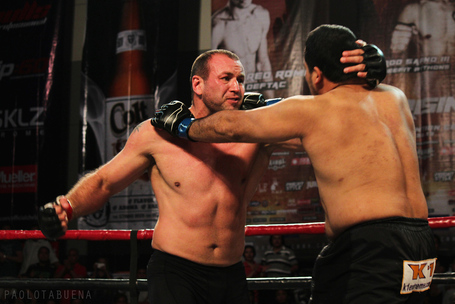 The second title fight on the card saw an exciting back and forth slugfest between Ricardo Sapno and Reydon Romero. It was a rematch of their 2011 brawl, but on the 2013 edition, it was Romero getting the better of the exchanges to claim the title. The first round was a pretty even affair with both fighters throwing caution to the wind with their shots, but as the fight progressed Romero took over. He was able to secure takedowns against the Judo-based fighter and landed some brutal ground and pound which almost finished the fight in the 2nd. Romero, who pushed an incredible pace early, looked to have fatigued a bit, but when the bell rang to start the third it was more of the same. He got Sapno to the ground and continued with heavy ground and pound that left his opponent's face battered and bruised until he eventually secured a fight ending rear naked choke.

Romero claimed the URCC featherweight strap, but his teammate and the former owner of that very title wasn't so lucky in his comeback fight. Following a long hiatus from the sport, Ali Khatibi returned against Adrian Hillana in a bout which revived the DEFTAC vs. Submission Sports rivalry that had the entire crowd split and cheering wildly for both camps. After a great start which saw Khatibi land some excellent dirty boxing and clinch work, it was Hillana who was able to capitalize on the ground, silencing the huge DEFTAC contingent on the crowd as he sunk in a rear naked choke to spoil the former champ's comeback fight.

Both Valda and Khatibi tried to return from a long absence from the ring, and while both of them started out great, on this night at least, neither former champion was able to reclaim their past glory.

Other standouts from the card include impressive wins by Meshaal Al-Khuzeem, Ric Empil, and Roy Doliguez.

Check out complete results below, along with video of the headliner.