Happy Holidays lineal title fans! One thing I am thankful for this year is lineal titles. So, my gift to you this holiday season is a new way of looking at them. Those of you who are familiar with my previous work on the subject know that I typically trace these titles back to the inaugural belt issued by the respective promotion. But, there is another way. This sport we love called Mixed Martial Arts has had a brief but rich history spanning over 20 years. Over the course of that time, promotions have come and gone: juggernauts like Pride FC, favorites like Strikeforce and the WEC, pioneers like Rings and World Vale Tudo, and lesser known promotions like Ironheart Crown and XMMA have all fallen. Of the 52 promotions I track for lineal titles, 23 are defunct and others like Pancrase have titles that are no longer actively contested. Today, I’d like to breakdown the lineal titles of these now defunct organizations. Once a promotion shuts its doors (most recently Legend FC) their existing champions must move on and find a new home to practice their craft. This begs the question, what happens to their belts? In the real world these belts are retired, but in the lineal world we can track them to see where they end up.

Below, I’ll start with the last champion to ever hold each promotional title and track them to where they are today. For ease of reading, I have broken them down by weight class. Like all of my other lineal title posts, I do not count fights contested outside of the given weight class. Below each graphic, I’ll list any important notes and/or comments. Enjoy! 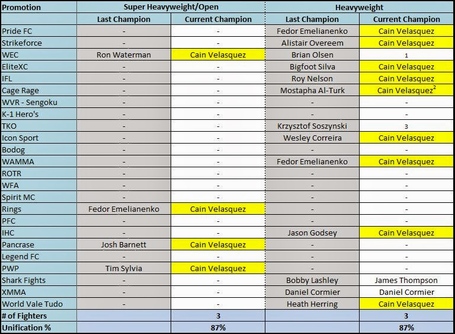 (1) Brian Olsen retired with the belt

· Heavyweight is unique in that I have chosen to combine all Super Heavyweight and Open weight titles with the generally accepted Heavyweight limit of 265. There is a lot of cross over between these fighters, so it makes the most sense. For that reason, you will notice that I have also grouped them together when tracking unification percentage.

· Notice that Pancrase is included in this category even though they are still an active promotion. The reason is that Pancrase has discontinued their Openweight title.

· Daniel Cormier was the first and only heavyweight champion of XMMA and has yet to lose that belt in a fight. He is moving to Light Heavyweight, so we will have to wait and see if he ever makes the move back up to defend this title against the big boys. I predict that he will, which is why I continue to list him as a lineal champion above. If he doesn’t, the title will be retired. 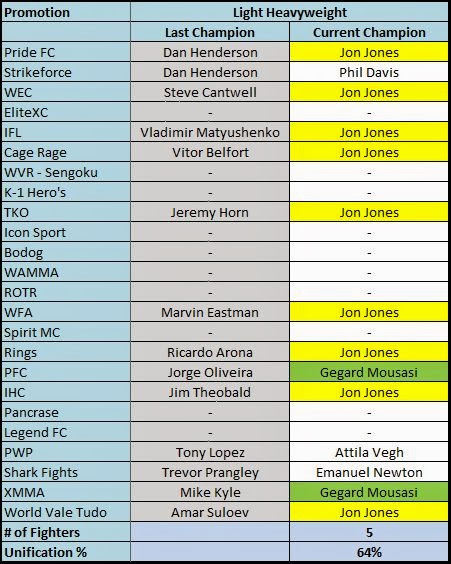 · Gegard Mousasi is an interesting case. For years, I thought that the Dream Lineal title would need to be retired due to his move up in weight. However, he is making his return to Middleweight against Lyoto Machida and now the question is whether or not his lineal titles at Light Heavyweight will need to be retired. Machida is the favorite, so there’s a chance he could send Mousasi right back up to Light Heavyweight to take his chances against larger opposition. Only time will tell, but I hope he continues in both weight classes because he actually holds 5 lineal titles at Light heavyweight using the more traditional form of tracing belts.

· Vegh and Newton will be looking to unify their belts next season in Bellator MMA. 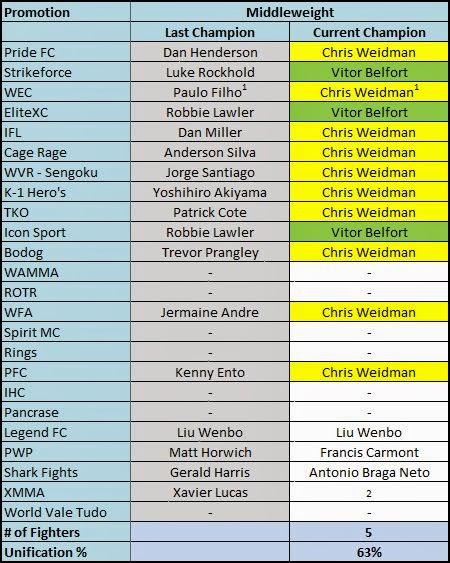 (2) Discontinued due to changes in weight class

· It’s looking like Vitor will finally have a chance to unify the lineal title he’s picked up since losing to Anderson Silva. The question is whether it will be in a rematch with Silva or a fresh match up against current UFC champion and Middleweight lineal king Chris Weidman. 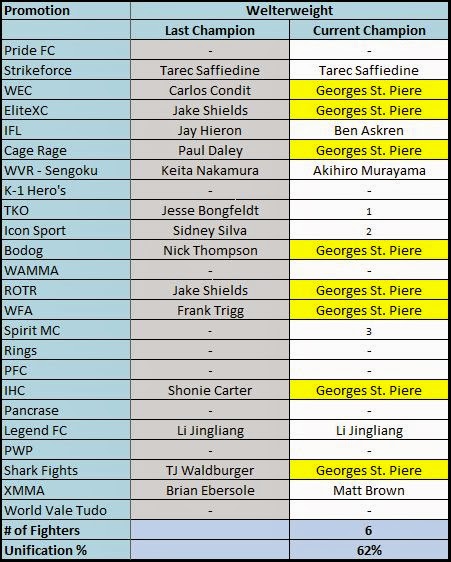 (2) Dead ends at Mac Danzig who moved down to LW

· Saffiedine and Brown are both in action soon, while Ben Askren may finally have a chance to bring his title over to the UFC. The question is whether or not GSP will ever put his 8 lineal titles on the line again. 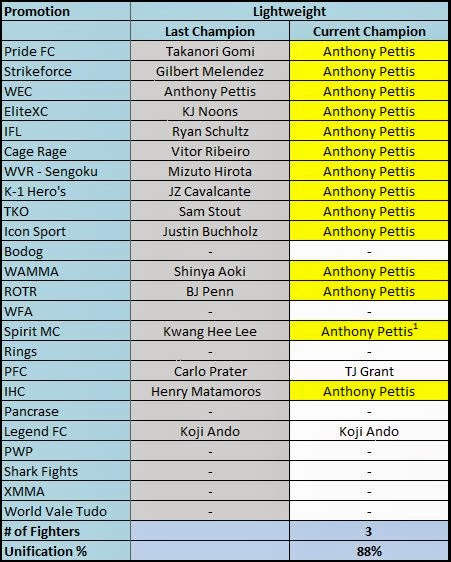 · It would be great to see TJ Grant fully recovered and able to defend his PFC lineal title sometime soon. Of course, the lineal king Pettis has some healing to do of his own before any further unification can occur. 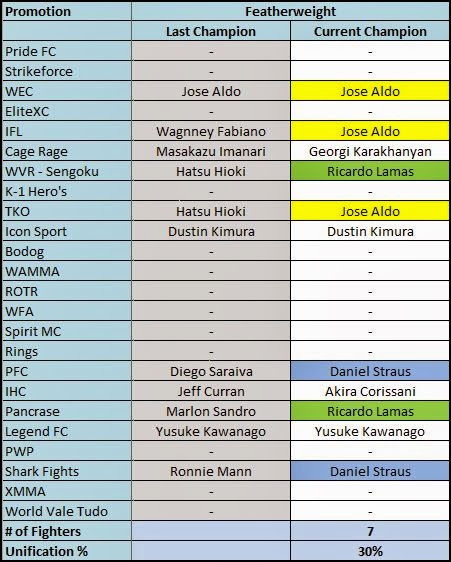 · The big unification opportunity on the horizon is Jose Aldo vs. Ricardo Lamas.

· Daniel Straus recently picked up 2 lineal titles with his win over Pat Curran.

· Notice that Pancrase is again included on this list. The reason is that the Featherweight title is no longer actively contested. 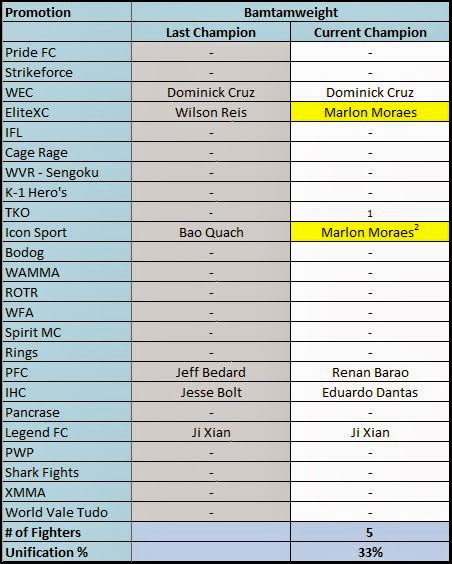 (1) Dead ends at Benevidez because he moved down to 125

· When Cruz and Barao finally meet in February to unify the UFC belts, they will also have an opportunity to unify the WEC and PFC lineal titles.

· Marlon Moraes should soon have an opportunity to add the lineal World Series of Fighting title to his collection. Only time will tell if/when that title will be added to the defunct list.