Here's a look at the official scorecard from the UFC 167 main event between Georges St-Pierre and Johny Hendricks. GSP won by controversial split decision.

The UFC 167 main event title bout between champion Georges St. Pierre and challenger Johny Hendricks concluded with a highly controversial decision. GSP was given a split decision win even though many fans and media members thought the bout clearly saw Hendricks winning three of the five rounds.

GSP was hurt in the second round and Hendricks took it to him throughout the fight.  Most of the rounds seemed pretty decisive - the second and fourth were clearly rounds for Hendricks, while the third and fifth seemed like GSP rounds. That left a decisive first round, one that Hendricks seemed to land more strikes in. But as you can see by in the official scorecard, two judges gave that round to St-Pierre. 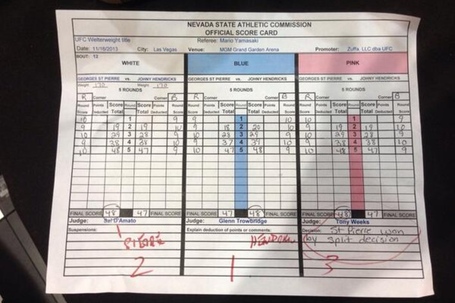 After the bout, GSP announced that he was taking some time away from the sport for personal reasons. Hendricks, believing that he won the bout, demanded a rematch. But that doesn't seem likely anytime soon.