Rustam Khabilov, normally known for his grappling, shocked us all Wednesday night with a devastating spinning hook kick to the head of Jorge Masvidal. BE's striking specialist Connor Ruebusch breaks down the technique, and how it was set up.

Say one thing about Russians, they find a way to win. Rustam Khabilov certainly did so against Jorge Masvidal on Wednesday, when he defeated MMA veteran Jorge Masvidal via unanimous decision. And Khabilov didn't even have to burn all of his own crops to earn the nod. Khabilov, best known for the suplexes that garnered him a knockout win in his UFC debut, put the cap on a back-and-forth performance with a show-stealing spinning hook kick to the head that sent Masvidal to the canvas, and effectively killed his offensive output for the rest of the fight.

First of all, the GIF.

Khabilov's kick came as a surprise to everybody, most of all Jorge Masvidal, but looking at the footage in retrospect, we can see it coming well in advance--55 seconds in advance, to be exact.

Khabilov's strategy in the first two rounds was readily apparent: land the overhand right, get the takedown. He was experiencing mixed success, landing heavy shots but failing to keep Masvidal on the ground and eating some brutal knees in the process. Going into the third, he and his corner knew that something more was needed. Coach Mike Winkeljohn told Rustam that 5s and 7s were there for the taking. Only Jackson-Winkeljohn fighters know exactly what strikes are signified by those two numbers, but I'm willing to bet that both are left-handed strikes, because that's exactly what Khabilov started looking for at the start of round three.

1. Rustam fakes a left hook, stepping forward with his right foot to prepare for a left kick.

2. The kick completely misses the mark as Masvidal steps back and blocks high.

3. Next Khabilov tries for a lunging jab that Masvidal parries.

4. And then a long left hook that is also blocked.

5. Realizing that the opening for the left isn't going to create itself, he feints the same right hand he had been throwing all night in the prior rounds.

6. And uses the opportunity of Masvidal's block to land a glancing left uppercut.

Khabilov doesn't find much success with his left-handed strikes in the first portion of the round, but they get Masvidal thinking about that left hand, whereas before he only really had to worry about the right. And the thing is, a strike does not have to land to be effective. Jorge Masvidal is not easy to hit with one-off shots, and he's quite aware of what's going on in the cage, no doubt due in part to his 33 fights and 10 years of MMA experience. He doesn't have bad defense at all.

But he does have limited defense. If you notice one thing about the images above, notice that Masvidal's every defensive action involves the use of his hands or forearms to block strikes. Not only does this mean that he has difficulty countering an aggressive opponent (he only had success against Khabilov coming forward or in the clinch), but also that he is forced to make a choice when defending. And when that choice is wrong, the results can be disastrous. 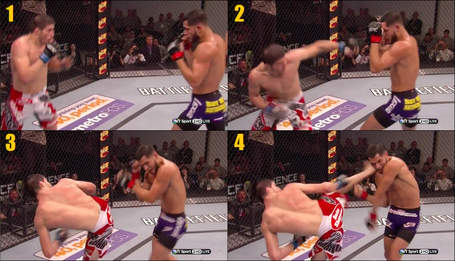 2. Khabilov fakes a left hook, the same sort of attack that Masvidal was easily defending in the first minute of the round. He brings his hands up to block the strike...

3. ...and realizes that it was a feint. Seeing Khabilov's back turned, Masvidal correctly thinks to defend a spinning strike, but at this point it is difficult to determine whether it will be a spinning hook to the head, or a back kick to the body.

4. He guesses wrong, dropping his hands in a desperate attempt to defend his ribs. With no other layers of defense but his trusty high guard, Masvidal is forced to take the kick on the jaw.

The interesting part of this sequence is that, more or less, Masvidal saw the kick coming, but couldn't stop it. It was not that he was completely unprepared for a spinning strike, but that he did not have the proper tools to defend one.

Khabilov's kick wasn't exactly pretty. It landed at an awkwardly short range--probably Khabilov expected Masvidal to step back from his spin and end up right in the power arc of the kick--and the impact nearly knocked both fighters to the ground. But Khabilov prevented the range from completely negating his technique by doing one very important thing. 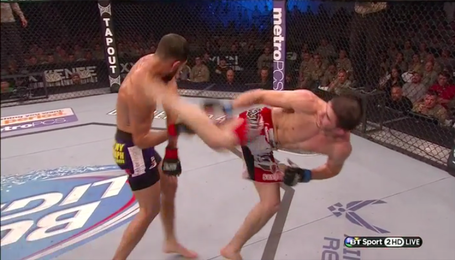 He looked at his target before landing. While the idea sounds obvious, there are actually two schools of thought on this matter. Many of the most experienced spin-kickers--Olympic-level TKD competitors and the like--contend that looking at the target is not necessary. For these fighters, the range is determined before the kick is even launched, and the target need not be sighted. Indeed, it is almost impossible for some of the best to lay eyes on the target before landing, their spin is so fast.

But for the less technical kickers, the Vitor Belforts and Rustam Khabilovs of the world, sighting the opponent is a very helpful trick. By turning his head before completing the spin, Rustam was able to make the split-second calculation that the range was not ideal, and managed to pull his kick in just a little bit. Granted, his heel failed to connect with Masvidal's chin, and much of his foot actually hit Masvidal in the neck rather than the head at all. But the spinning hook kick is an inherently powerful strike (as demonstrated by Uriah Hall's own too-short kick on Adam Cella: GIF), and the impact was more than enough to daze Masvidal and drop him to the canvas.

It seems that ever since Edson Barboza's famous KO everybody from the regional scene to the highest levels of the UFC has added a few spinning kicks to their game. This kind of fad-based fighting is often the cause of much frustration for striking enthusiasts such as myself, but it's heartening to know that some fighters are finally learning not just how to throw spinning attacks, but how to land them.

For more striking analysis, subscribe to Heavy Hands, Connor's new podcast that focuses on strategy, technique, and training in MMA and other combat sports.